All of the iPhones in Apple's iPhone 12 lineup will have Qualcomm modems that support 5G, but all 5G networks are not equal. There's the superfast mmWave (millimeter wave) 5G and the slower but more widespread Sub-6GHz 5G. Smartphones transmit using electromagnetic radio frequencies, with these frequencies organized into different frequency bands. Some of these bands have more capacity than others and are able to deliver information faster, which is the case with mmWave. mmWave refers to higher frequency radio bands ranging from 24GHz to 40GHz, and Sub-6GHz refers to mid and low-frequency bands under 6GHz. Low-frequency bands are under 1GHz, while mid-bands range from 3.4GHz to 6GHz and are not considered "mmWave." mmWave 5G networks are ultra-fast, but they're also very short range. To use mmWave technology, the device needs to be within about a block of a 5G tower, which isn't feasible in suburban and rural areas. mmWave spectrum is also blocked and obscured by doors, windows, trees, and walls, further limiting its available range, and because it requires so many towers for coverage, it's expensive for carriers to deploy. Because of its limited range, accessing mmWave spectrum has only become possible over the course of the last few years due to technological advancements like Massive MIMO, adaptable beamforming, and miniaturization of complex antenna processing functions, and mmWave is still nascent technology that's in the process of being adopted.

mmWave's limitations make it best suited for dense, urban areas, or specific targeted spots like airports or concerts. In rural and suburban areas, mmWave technology is not practical because it doesn't have enough range, which is where the Sub-6GHz networks come in. Sub-6GHz 5G is faster than 4G, but it doesn't offer the blazing-fast speeds that you can get with mmWave. Since it has a longer range and can better penetrate objects, it's much more affordable for carriers to implement.
It's worth noting that mmWave 5G offers greater bandwidth, relieving network congestion. In crowded areas, LTE speeds can slow because of the number of devices connecting, while mmWave technology is able to handle a greater number of connections without significant speed drops. For that reason, you may see mmWave set up in crowded areas where network congestion is a problem, such as at sporting events, airports, concerts, and other locations where many people gather, as well as in urban areas.

With an iPhone that supports both mmWave and Sub-6GHz, lightning-quick 5G speeds where mmWave technology is available, while other 5G coverage will be similar to the more modern LTE networks that have been rolling out over the last few years. With an iPhone that only has Sub-6GHz, the most widely available 5G networks can be used, but the faster mmWave that might be available in cities will be blocked  Over time, low-band and mid-band 5G speeds should get much quicker just like LTE did as it evolved, but those incredibly fast speeds that people expect from 5G are mmWave speeds and are much more limited in availability.
mmWave spectrum can theoretical deliver speeds as high as 5Gb/s, which is much, much faster than the speeds achievable with LTE connectivity. Practically, early mmWave networks have been delivering speeds that max out at around 2Gb/s, but Verizon's mmWave network with a Samsung smartphone in Chicago in mid-2019, delivered speeds varying drastically based on position and proximity to the nearest 5G tower.

LTE networks are much slower.  Recently tested, top download speeds were 53Mb/s on Verizon, but most carriers were closer to 35Mb/s. Sub-6GHz networks fall somewhere in between mmWave and LTE speeds. Sprint's Sub-6GHz network (which is now T-Mobile's), for example, maximum speeds of about 200Mb/s were available. A good LTE connection can hit those speeds, but realistically, Sub-6GHz 5G is faster than most people will see with LTE, though not reaching those incredible speeds possible with mmWave. OpenSignal in August 2020 analyzed real-world 5G speeds in multiple countries (using smartphones that currently support 5G), and the speed results for the United States were well below marketing promises. Average download speeds on 5GHz networks were around 50.9Mb/s, compared to 28.9 Mb/s on LTE, and that's because most of the coverage in the U.S. is Sub-6GHz at this time. 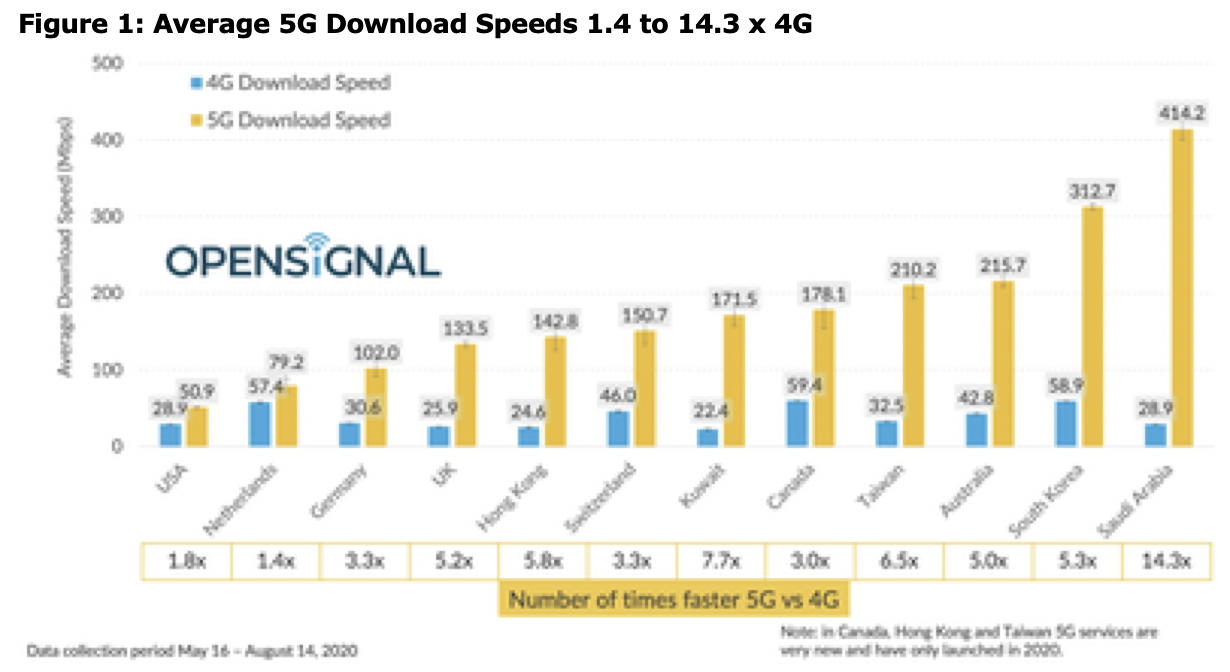 ​Other countries have more advanced 5G networks and can provide some insight into the speed improvements expected within the next few years. On average, OpenSignal found 5G connectivity to be between 1.4x and 14.3x faster than 4G, but this data does not separate mmWave 5G from Sub-6GHz 5G. OpenSignal noted was time connected to 5G networks. In the United States, smartphone owners with devices that support 5G spent just 19.3 percent of the time connected to 5G networks because of their limited availability. 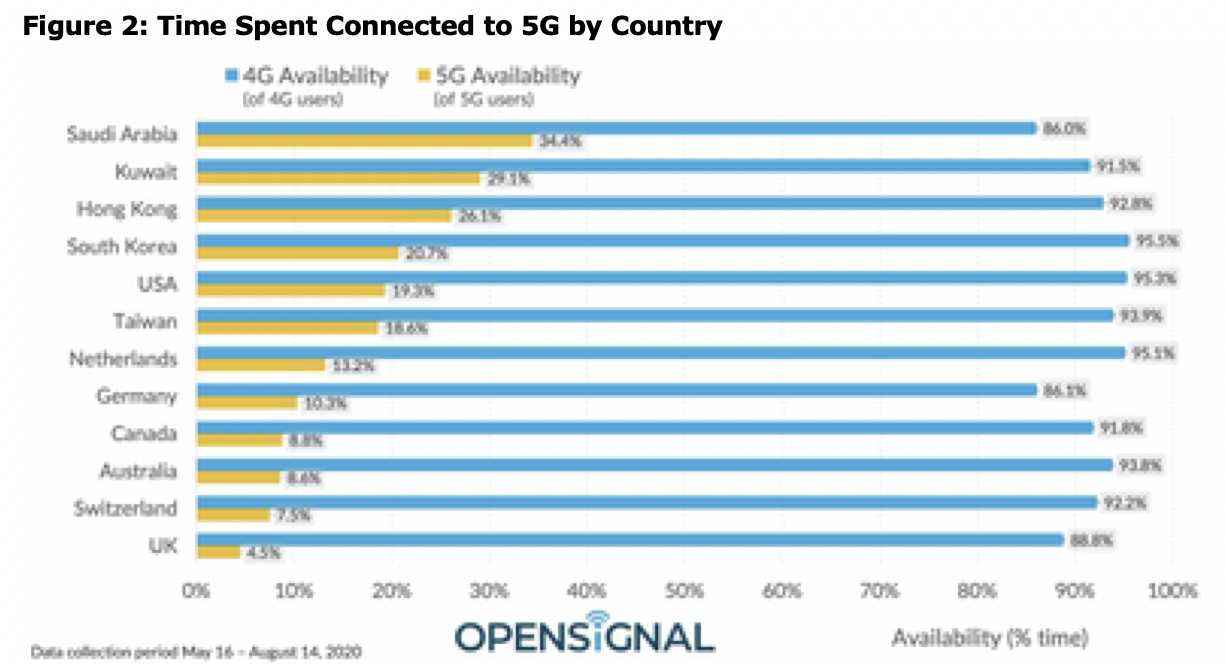 Apple employees (testing the 5G iPhones) reported that the 5G speeds have been disappointing as the current 5G networks are not "improving connection speeds much." Most people who are expecting their iPhones to deliver super-fast mmWave speeds will likely end up similarly disappointed when they find that mmWave networks just aren't available in most places. In the United States, all three major carriers are testing mmWave support, but it's still available in a limited capacity. It's in select major cities and not even citywide - it's limited to select neighborhoods. With Sub-6GHz, it's already more widespread with AT&T and T-Mobile rolling out lower-spectrum 5G networks that are available to many more customers.

The 6.7” iPhone 12 models support mmWave 5G technology, and only in certain countries, because it doesn't make sense to roll out the feature in places where mmWave spectrum just isn't in use. Most iPhone owners don't need mmWave connectivity, nor will most people even access to it on a regular basis for the next several years to come. Full mmWave 5G connectivity is still in the process of rolling out, and it continues to be limited in scope. It's only available in major cities in the United States, and in most of those major cities, it's not available everywhere and is in select areas. The transition from 4G to 5G started in 2019 and there's still a ways to go, so most people are going to be able to get by without mmWave speeds.
If you don't spend a lot of time in one of the specific neighborhoods in one of the cities where your carrier offers 5G technology, you're not going to benefit from mmWave speeds and purchasing a mmWave ‌iPhone‌ should not be a major concern at this time. If you do live in a major urban area with a lot of mmWave 5G towers, you could see benefits from an ‌iPhone‌ that supports the faster technology.
Carriers are, of course, going to continue building out their mmWave networks and in a few years,  it could be much more widespread, which is a consideration for those who take future-proofing into account when making an ‌iPhone‌purchase. But even years from now, mmWave is still likely to be limited in scope and available only in more urban areas and Sub-6GHz is the 5G most people will know and connect to.

Some carriers are charging more for 5G right now. Verizon, for example, is pricing 5G plans $10 higher than comparative 4G unlimited plans. AT&T and T-Mobile aren't charging higher prices yet, but that could change as 5G further expands.