OLED Info reports that STRATACACHE plans to construct a MicroLED display production line in Eugene, Oregon with production starting around 2022-2023. The new factory (E4) will be a complete MicroLED production line, from epiwafer (on 300 mm silicon wafers), through transfer process and to final module assembly. The company plans to produce a wide range of displays, from tablet-sized panels to large-area displays. They expect to have a prototype in Q321. Some of these displays will be flexible and transparent as the company sees a market demand for such technologies. The yearly capacity of the E4 is expected to start at a 1 million square meters per year. The company’s fabs will be able to supply both components level products and complete display products to third party customers. In March 2020, STRATACACHE acquired a 1.5 million square foot factory, formerly used by Hynix Semiconductor to produce memory chips on 200 mm wafers. This facility, located in Eugene, Oregon, is approximately 100 miles away from the Intel Hillsboro fab and R&D cluster, which has over 20,000 employees in semiconductor fab operations - from which the company hopes to attract talent. 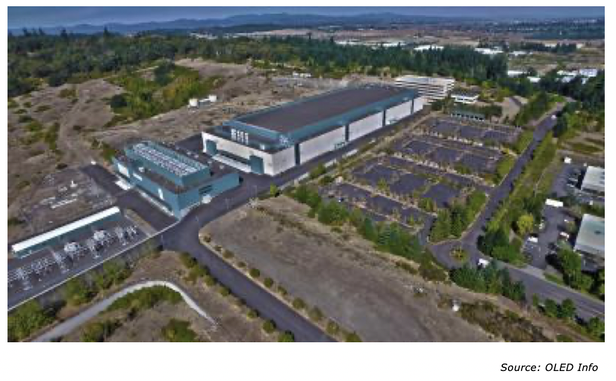 ​The E4 facility contains over 120,000 square feet of Class-1 clean room space, and over 400,000 square feet of Class-1 to Class-1000 clean rooms. The company plans to kick start MicroLED epiwafer production by October 2021, based on 300 mm wafers using a GaN-on-Silicon process. STRATACACHE is a global leader in digital signage and commercial intelligent digital display and sensor systems. The company provides a full scope of technological solutions under one roof. The company's retail solutions enable the creation of an in-store evolution to truly drive a frictionless store visit.