Through a combination of 3D printing techniques and sprayable electronic technology, researchers have come up with a new kind of touchscreen display that can be adapted to almost any shape. They're calling it ProtoSpray, which has been shown to work on a cube, a hemisphere shape, and a bendable Möbius strip-shaped tube. These objects combine a 3D-printed substrate, interconnected electrodes set out in a preset design, and an evenly distributed layer of electroluminescent (EL) ink, in whatever configuration is needed. Researchers want people thinking about displays in the same way as plastics or paints. The finished products partially light up when an electrical charge is applied, and can also respond to simple touch inputs. They could be used to do everything from open office doors to guide visitors round an interactive museum tour.
University of Bristol researcher Ollie Hanton, lead author said, "The process is very accessible: it allows end-users to create objects with conductive plastic and electroluminescent paint even if they don’t have expertise in these materials." 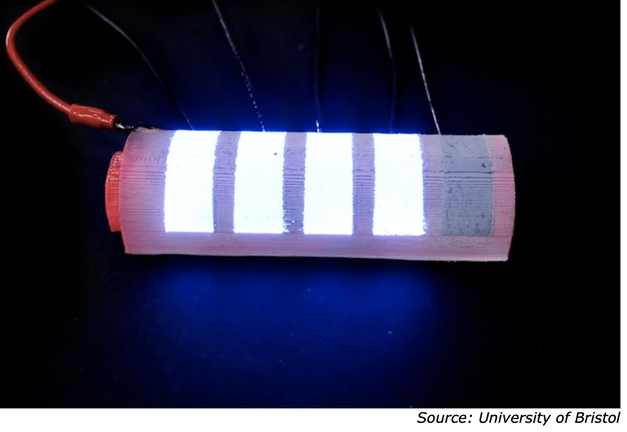 ​One possible next step is to look into building a machine that's able to produce the base object and sprayed ink in one process, making it even more efficient and viable for commercial use. In the meantime, it's another example of thinking outside the box when it comes to both display output and touch input. Some of the same researchers were previously behind a spraying process that can make almost any surface interactive. The paper was recently presented at the ACM Conference on Human Factors in Computing Systems (CHI).