Vertical Divider
Arguably the most obscure of the bunch was the NEC Medias W that never saw the light of day outside of Japan. Featuring dual 4.3-inch qHD displays, which utilized a hinge to fold over the two displays side-by-side to one another. Not only did it offer the convenience of extra real estate to surf the web, but also allowed users to interact with the app on one display – while the other can be used as a keyboard. Released in 2013, the NEC Medias W wasn’t a shabby job for a foldable phone, but it was thick when closed because it was two smartphones rolled into one, but it offered just about the same utility that any other smartphone offered at the time. The main problem, however, was that the interface wasn’t optimized to take advantage of the dual displays. This isn’t just isolated to the NEC Medias W, but it was and has continued to be a challenge for manufacturers going for the foldable phone. 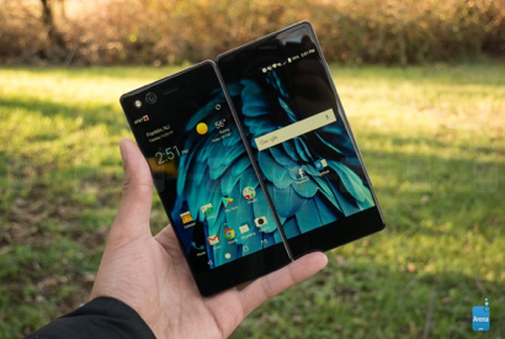 Source: Company
​In late 2017, the ZTE Axon M was an evolution to the foldable smartphone design. The design wasn’t too far away from the NEC Medias W, since it also employed dual displays held together by a hinge – allowing them to come together side-by-side with an even skinnier bezel in between the two displays.  Unlike NEC’s offering, the ZTE Axon M benefitted from Android’s advancements that enabled side-by-side apps multitasking. Many apps were optimized to run simultaneously, so the two displays allowed for dedicated apps to run on them. However, it failed to deliver a practical experience for a smartphone that transforms into a mini tablet of sorts.
​Figure 3:Sony Tablet P 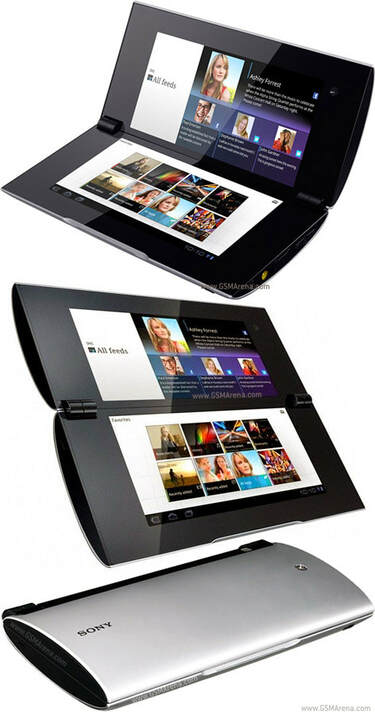 Source: gsmareana​
​In 2012, Sony delivered what some paint as one of its quirkiest devices ever to be released – the Sony Tablet P. At first glance, it seemed like they produced a clutch bag or something because of its shape and size, but it was in fact a foldable tablet that featured two 5.5-inch 1024 x 480 LCD panels. It was an ambitious offering by providing an optimized layout with many native apps. Even better, the Sony Tablet P was PlayStation certified, which allowed you to playsome old PlayStation games. The top display showed all the action, while the bottom one featured the on-screen controls – giving users an unobtrusive view of the game. However, the Tablet P was quickly forgotten because it was notoriously choppy with its performance, it shot terrible looking photos and videos, and the battery life was atrocious. 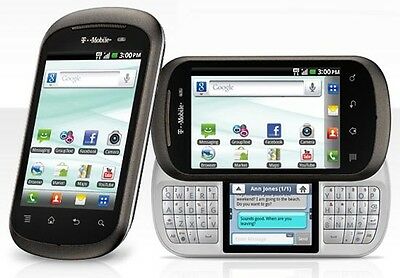 Source: PicClick
​Rivaling the LG DoublePlay was the Samsung DoubleTime with a clamshell design featuring two 3.2-inch touchscreen displays, one on the outside and one that opened up alongside the QWERTY keyboard. Unfortunately, the displays were washed out, the phone was generally sluggish, and its battery life was on the weak side and was soon forgotten.
Figure 5:Samsung DoubleTime 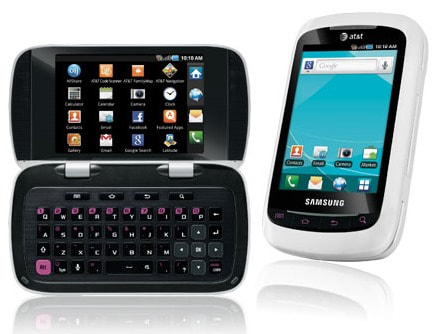 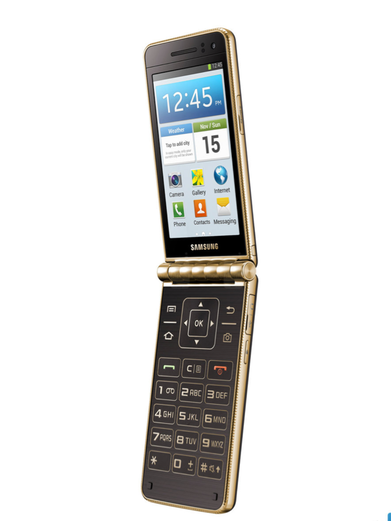 Source: phoneArena
​The Samsung Galaxy Golden was also one of those phones that never saw the light of day outside its home market. Fashioned with nostalgia in mind with its flip phone-esque design, the Samsung Galaxy Golden came with dual 3.75-inch AMOLED displays, a Snapdragon 400 processor, 2GB of RAM, and two cameras. A traditional dial pad and physical buttons accompanied all of that.
Figure 7:Acer ICONIA 6120

Source: Company
The 2011 Acer ICONIA 6120 was a dual-screen tablet/PC, essentially a prelude to the Microsoft Surface with all the bells and whistles of any ordinary laptop at the time. It ran Windows 7 Home Premium a while before Microsoft fully committed to a touch-optimized interface, which is partly to blame for its troubles. It was a traditional Windows desktop experience with some touch elements thrown in for the novelty. The extra secondary screen acted as the on-screen keyboard. The Acer ICONIA 6120 was just a bit too ahead of its time, but this dual-screen laptop wasn’t convincing about its advantages as a foldable mobile device. 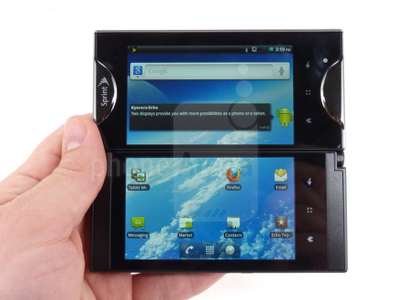 Source: phoneArena
​
The 2011 Kyocera Echo put the mechanism to position the dual 3.5-inch LCD screens next to one another, and the spring hinge didn’t give users the confidence that it would stay firmly in place. Secondly, the amount of lag due to the phone having to work harder with the dual displays made it almost unusable. Third, the battery life was severely affected because of the extra screen in play. The biggest letdown about the Kyocera Echo was that it lacked the necessary refined experience. It did offer some level of side-by-side multitasking, but it still felt more like an extended smartphone experience and it didn’t feel like a tablet. The device also looked and felt cheap

The short history of these devices shows the difficulty of building a foldable device without a foldable display or a multi-window UI. Now, this technology exists and is on the cusp of becoming a Very Big Deal in the tech industry, in marketing and research terms. Manufacturers think flexible is a fantastic idea, but the pressing question is how much real-world appeal the hardware really has. 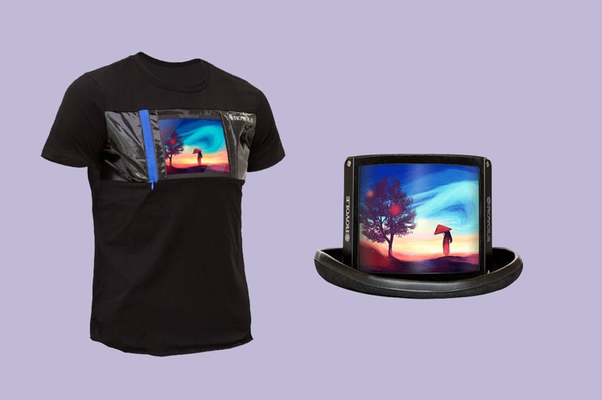 Source: Royole
​
​
And it's not just big or complex items. Innolux has made a round 1.39-inch 400x400 (287 PPI) panelsince 2017 while the Cleer Mirage Smart Display Speakeraccompanies your music with information and visuals on a wrap-around
A key question about folding phones is how much wear and tear they'll take before either hinges or screens give out - it's a been a critical focus of research into folding displays. Royole saysthat its FlexPai can be folded 200,000 times. Swift Creatives' Matthew Cockerill also highlights manufacturing and design tolerances as a key concern: "A major limitation is the bend radius with these first-generation screens that dictate the overall form of the phone and the mechanical strain relief required to protect the fold in daily use. This will influence the hinge area of our once rigid smartphone." The Korea Herald, reported an executive from a Samsung customer firm said: "When unfolded, Samsung’s foldable phone does not show any crease indicating it had been bent. However, completely folding the device will lead to a breakage. For this reason, Samsung is testing out the device so that the sides remain slightly lifted when folded.” 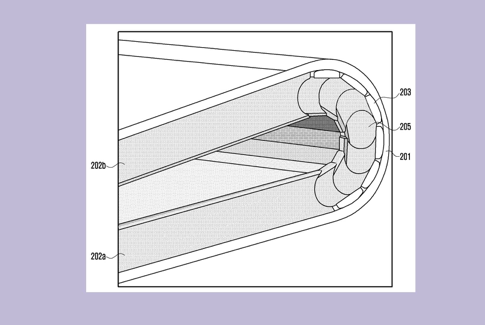 Source: USPO
For the forthcoming generation of flexible TV screens, the mechanisms are more forgiving, as rollable screenssuch as LG's 65in Signature OLED TV Rdon't have to endure the intense flexing of folding devices. Google announcedscreen continuity and multi-resume support for Android at the November 7 Android Dev Summit 2018, meaning that the mobile OS now has native support for folding screens in various configurations. Royole, which got in early with its FlexPai missed out on Google's secretly developed support for folding screens in Android, instead implementing its own Water OS user interface on top of an earlier version of the OS. However, the company will be investing $30 million to fuel the creation of apps for its platform. Samsung has also published guidanceand an emulator for developers working on apps for flexible displays. So far, there haven't been many solid app announcements, but native Android apps such as Google Maps have been shown in example images of flexible screens, and news app Flipboardhas saidthat it will support the forthcoming flexible Galaxy's folding capabilities. An anonymous Korea Heraldsource says Samsung plans to produce a small run of 1 million folding Galaxy devices, anticipated to launch in the first half of 2019. Their target audience, "Men in their 40s" who remember the glory days of folding feature phones and who have enough money to afford the anticipated 1.5+million won price. The following summarizes current activity:

The early promise of foldable phones has always been about eliminating the need for tablets. Tablets might technically be a unique form of device, but as so-called “phablets” became the norm, the lack of any real differences between phones and tablets has become more and more obvious. A tablet’s OS and apps need to be tailored to its big screen, but that screen is its only real distinguishing factor. That big screen makes them better for drawing, watching movies, or browsing the web, but it’s also pretty unwieldy for basic productivity tasks like typing, unless they are placed on a surface or connected to a physical keyboard like the iPad Pro and Pixel Slate. Smartphones, meanwhile, need to be capable of replying to a dozen WhatsApp messages without a table in sight. It goes without saying, but tablets are also terrible at fitting in pockets. These issues are why tablets and phones co-exist as separate device types. Foldable phones could change this. Done well, folding phones could offer all of the functionality of a tablet, without losing the convenience or flexible productivity of a phone.
Yet another contender in the battle of form factors is the nu.oio., Nubia’s wearable smartphone, expected to be announced at MWC. 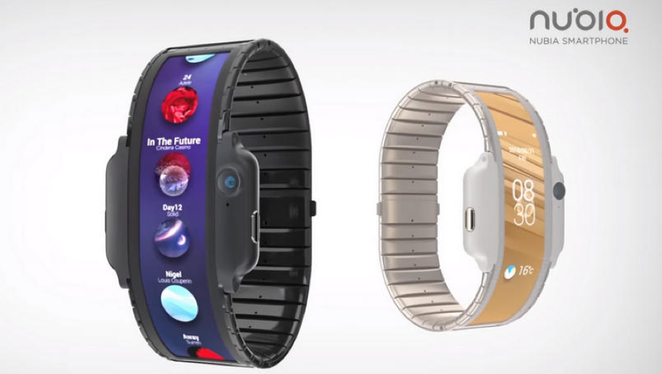 Source: Company
​Nubia, which started off as a subsidiary of ZTE, will be launching a flexible device that won’t be ‘foldable’. Instead, it’ll come with a ‘flexible’ screen and fall under the wearable category, which classifies it as a smartwatch. If my experience with Apple’s Watch 4 is any indication and the Nubia comes with a larger display and more features, it could be competitive with smartphones in general.