Vertical Divider
Special Report -- Galaxy Unpacked Delivers 3 S20s and 1 Flip
February 16, 2020
​
At the Galaxy Unpacked event, Samsung announced the Galaxy Z Flip, a handset has an outward-facing display that unfurls to reveal a bendable panel within. It’s Samsung’s answer to Motorola’s reimagined Razr and TCL’s DragonHingeconcept, and while its internals are middle-of-the-road, its price is more reasonable than might be expected. The Galaxy Z Flip will begin shipping to customers who preorder on February 14.  The Galaxy Z Flip is a smartphone in two congruent parts: A top portion housing the external display — the Focus Display — above which sits twin cameras and an LED flash, attached to a bottom portion via a hinge that supports the tall internal screen. The outward-facing AMOLED panel measures 1.06 inches diagonally with a resolution of 300 x 112 and Corning Gorilla Glass 6 shielding, which is rated to withstand up to 15 consecutive drops from 1 meter onto rough surfaces. Taking a page from the Motorola Razr, the screen dims when it’s not in use and otherwise displays the time, battery, charging status, and notifications. And when a phone call comes in, it shows the caller ID, as well as sliders for rejecting or accepting the call. The cameras above the display — which double as selfie cameras, with the screen serving as a viewfinder — share a resolution (12 megapixels) but not a field of view. One has a 123-degree wide-angle field of view and an f/2.2 aperture and optical image stabilization, while the other has a 78-degree field of view and an f/1.8 aperture. Both shoot video in up to 4K resolution at 60 frames per second, and they benefit from Samsung’s Pro Video Mode, which offers fine-grained control over each clip. 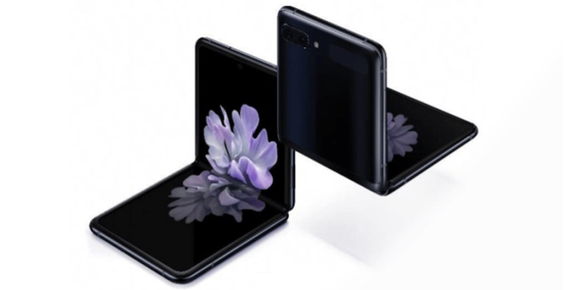 Source: Company ​
​
The cameras are one of the few distinguishing features on the otherwise low feature- Galaxy Z Flip, save a capacitive fingerprint sensor and a volume rocker on the right side and a USB Type-C port and speaker grille toward the bottom. The Z Flip has a 6.7-inch Dynamic AMOLED Infinity Flex primary panel, which has a 2,636 x 1,080 resolution (425 pixels per inch), a 21.9:9 aspect ratio, and a top-center hole-punch cutout to accommodate the front-facing camera. The camera has a 10 megapixel sensor with an f/2.4 aperture and an 80-degree field of view, and it features a software-defined auto-focusing algorithm that hones in on the faces it detects.
​
The cover lens uses Ultra-Thin Glass to strengthen it against abuse that might lead to artifacting. (It’s rated to last up to 200,000 folds.)  Beyond the improved robustness, Samsung says Ultra-Thin Glass enabled it to shave millimeters off the phone’s thickness and ounces off its weight. The Z Flip is just 7.2 millimeters when opened and 15.3-17.33 millimeters when closed, and it weighs 6.9 ounces — 0.3 ounces lighter than the new Motorola Razr (7.2 ounces). The Galaxy Z Flip packs Qualcomm’s Snapdragon 855+, a capable system-on-chip that’s the successor to the Snapdragon 855. The 7-nanometer eight-core chip can achieve download speeds up to 2Gbps over cellular, and it supports Wi-Fi 6 (aka 802.11ax), along with 802.11ac Wave 2 for superior wireless performance on pre-802.11ax networks. Four 64-bit ARM Cortex cores based on Qualcomm’s in-house Kryo 485 handle the heavy lifting — one prime core clocked at 2.95GHz and three performance cores at 2.41GHz — while four 1.78GHz efficiency cores handle less performance-intensive tasks. Somewhat uniquely, the Snapdragon 855+ diffuses AI capabilities across multiple components (including a tensor accelerator) for a theoretical capacity of trillions of operations per second. The Galaxy Z Flip the first to carry the Z designation, which Samsung is dedicating exclusively to foldables.

One thing truly stands out -- Flex Mode, a feature that enables half of the folding phone’s screen to sit upright while the bottom rests flat on a table. Up until now, everyone has been waiting for a reason that a foldable phone would be worth considering over one without a pliable display. Flex Mode instantly answers that question, demonstrating how users will be able to snap selfies using the top half of the screen while activating controls on the bottom half. Flexibility specifically and uniquely enables this; it’s only because the Z Flip has a locking hinge that it’s able to let you see the screen on the Y axis while the controls sit on the X axis. It doesn’t take much imagination to picture further mini laptop-like scenarios where users can conveniently tap on a little keyboard while using the rest of the face as a display. Suddenly the value of the Z Flip’s atypically elongated display makes a lot more sense than it did as a super-long, flat panel of glass. Trumping Motorola’s folding Razr, users get the benefits of a big screen, the pocketable footprint of a small phone, and a middle-of-road option that works in a convenient new way.

One negative reported by testers was the extreme sensitivity to smudges from fingerprints. In the demo area at the Palace of Fine Arts, rows of Z Flip demo phones were accompanied by nearby Samsung employees each with a microfiber cleaning cloth

Samsung also announced the Galaxy S20, Galaxy S20+, and the Galaxy S20 Ultra. All three devices feature the same SoC, the Qualcomm Snapdragon 865 or Exynos 990 depending on the region. However, the performance won’t be quite the same between all 3 units in each region, because Samsung is offering multiple SKUs of each S20 model, some of which have 8 or 12GB of RAM. The Samsung Galaxy S20 Ultra is the first smartphone on the market with 16GB of RAM, but it might not hold that crown for very long. Xiaomi is scheduled to announce its flagship Mi 10 series just two days, and the upcoming devices may also feature up to 16GB of LPDDR5 RAM. Samsung is likely sourcing the RAM modules from its own memory-making division, unlike Xiaomi who is dual-sourcing from Micron and Samsung. With 16GB of RAM, the S20 Ultra comfortably surpasses the average laptop in terms of memory capacity. This amount of RAM seems absurd on its surface, but it could prove useful for those using Samsung DeX as a full-blown PC replacement. Furthermore, with how much memory modern high-end Android games and camera processing algorithms take up, the 16GB of RAM supports the Galaxy S20 Ultra in all scenarios without ever having to worry about apps reloading. In addition, Samsung’s 16GB RAM module is LPDDR5, which is faster than the previous generation LPDDR4X modules found in most flagship smartphones on the market. LPDDR5 enables faster memory speeds at a lower power consumption thanks to features such as DVFS, Deep Sleep Mode, DQ Copy, and WriteX. In essence, the 16GB of LPDDR5 RAM on the Samsung Galaxy S20 is future-proofing the purchase so apps can always be kept in memory, switched quickly between apps, and load multiple apps on the phone or in Samsung DeX for many years to come. 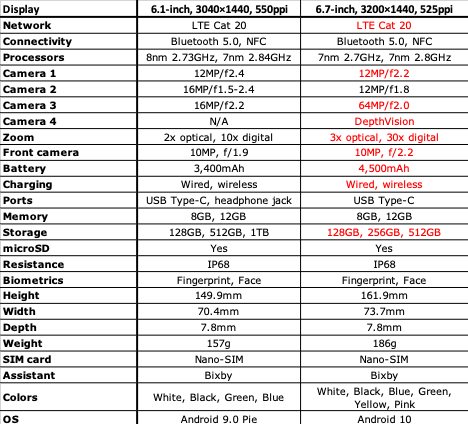 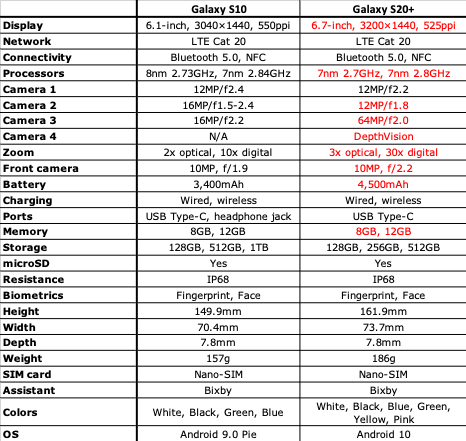 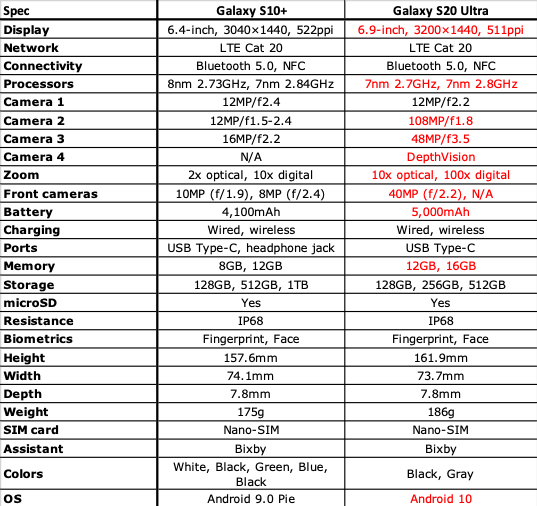 In all three cases, the phones are bigger, heavier, with a larger screen, no longer come with a headphone jack and cost more. There are more cameras, faster processors, and more RAM and the batteries have more capacity.
​
Figure 3: Galaxy S20 Pricing vs. S10 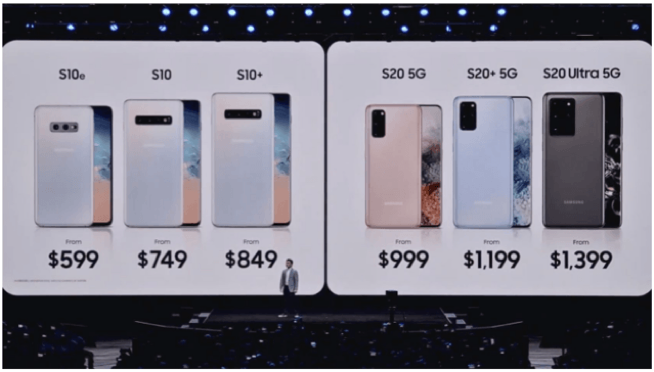