Sony revealed the Xperia 5 II, a second-generation version of its “premium mainstream” phone. The Xperia 5 II follows last year’s Xperia 5 and sits below the Xperia 1 II in the Sony family tree. The Sony Xperia 5 II is Sony’s second take on an affordable flagship. The company revealed the original Xperia 5 in September 2019 and this sequel arrives right on time for the 2020 holiday shopping season.
Sony says the Xperia 5 II was “built for speed” and “made compact.” More specifically, it was built for gaming speed, imaging speed, and performance speed, and made for “perfect hand and pocket fit.” In order to meet these marketing milestones, Sony gave the phone a top processor and specs. It cut very few corners and made every effort to make the phone a totable tower of power. 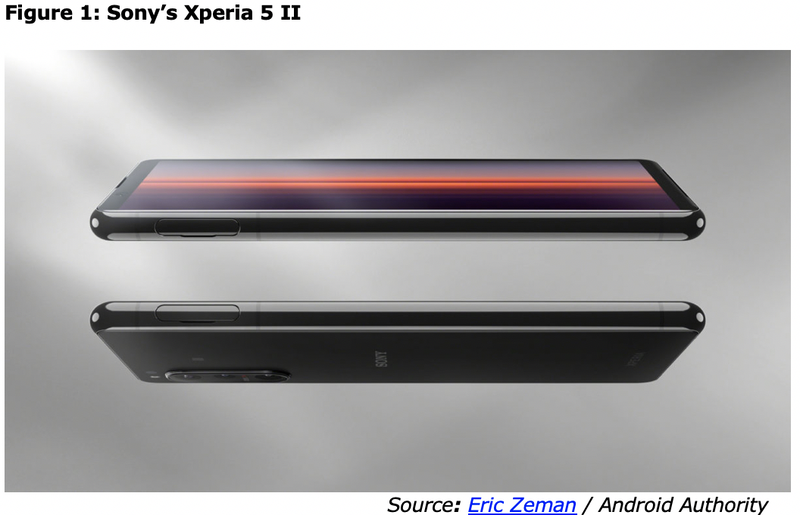 ​The Xperia 5 II design targets imaging, gaming, and performance. The 5 II is a Gorilla Glass 6 and aluminum sandwich that carries an IP68 rating, offers a headphone jack, and supports expandable microSD storage. It has a dedicated camera and Google Assistant buttons, as well as a USB-C port, stereo speakers, and a pleasing piano black finish. The Xperia 5 II has a triple 12MP system for its standard, wide, and telephoto lenses. The focal lengths mimic those of certain types of lenses, such as a 16mm wide-angle, 24mm standard, and 70mm telephoto. They all rely on Zeiss lenses with real-time eye autofocus for both humans and animals. The sensor is much bigger than last year’s phone at f/1.7, which allows it to perform better in low light. The camera relies on Sony’s Bionz engine and has the ability to shoot bursts at 20fps with continuous autofocus tracking. The phone can shoot in RAW+JPEG mode for the ultimate in editing flexibility.

Sony paired with CineAlta so the phone can shoot at the 21:9 cinema ratio with advanced color reproduction. Moreover, it can handle 4K video capture at speeds up to 120fps for ultra-smooth slow motion. New USB tethering allows owners of the Sony A7S III camera to send files via USB-C to the phone for FTP upload.
​
What about gaming? Well, let’s start with the display. The screen measures 6.1 inches across the diagonal and has a 21:9 aspect ratio — something Sony pioneered with last year’s Xperia 1, 10, and 5 phones. Sony has upped the game (pun intended) by jumping to a 120Hz refresh rate with 240Hz sampling rate. That means scrolling and other on-screen action will be smooth, while the screen will be more responsive to touch input. The screen is available in two modes: standard mode for gaming and media consumption, and creator mode for photography and videography. The latter mode is more accurate with respect to color so creators can see exactly what their content will look like as a finished product. The phone ships with the Qualcomm Snapdragon 865 processor, the standard version of the chip, not the “plus” variant that has higher clock speeds and has 8GB of RAM, which is a bit less than phones at this price point, but 128GB and 256GB variants are available. There’s a much bigger battery inside the Xperia 5 II, which has improved from 3,180mAh in last year’s phone to 4,000mAh in this year’s phone. Sony says it was able to fit a 25% bigger battery in the same-size chassis by shrinking other components. Using an optional 21W charger will net a 50% charge in just 30 minutes. The included charger takes 35 minutes to reach the same 50% mark. No wireless charging, however, which is a shame. 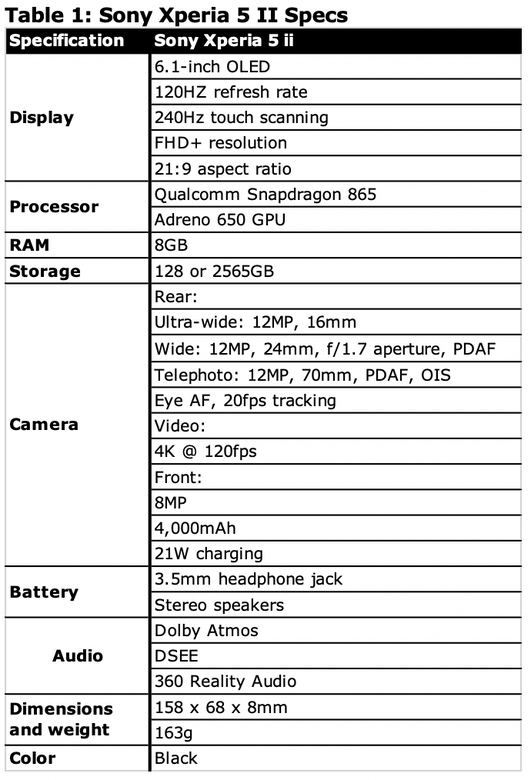 ​Competition in the sub-$1,000 space includes every major player, including Samsung, OnePlus, Google, and even Motorola.

Performance if several smartphones is shown in the next figure. The Xperia 5 II is expected to come in around 540,000. 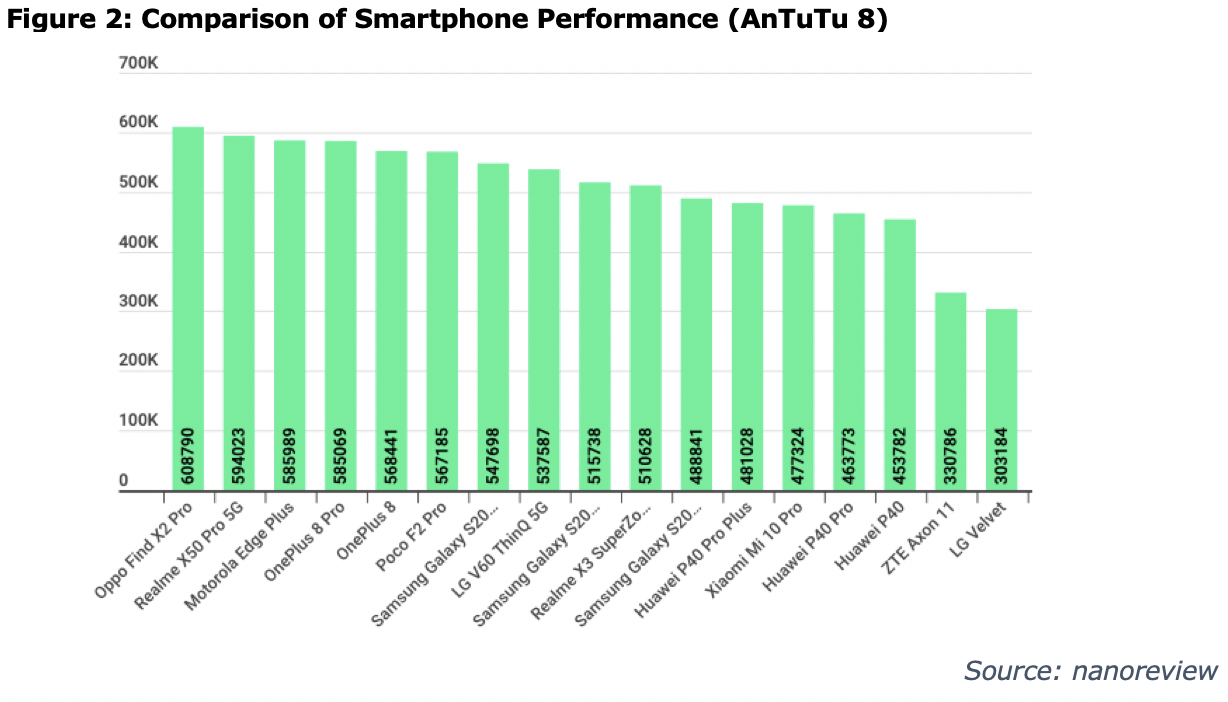