Sony’s soon to be released Xperia 5, like the Xperia 1 before it, has a 21:9 'CineWide' aspect ratio, which eliminates the black bars on either side of the screen, but it's a little pointless because it’s difficult to find a movie that uses a 21:9 aspect ratio first. The Xperia 5 delivered a near-perfect color gamut result of 95.7%. just below the Samsung Galaxy S10 and the Huawei P30 -. It has Bravia TV technology that's been used to produce cinema-quality in the home, and is also used in actual cinemas, with chains like Vue also using Sony's 4K digital projection technology.
Inside the 5 is a Snapdragon 855 processor coupled with 6GB of RAM - exactly the same as the Xperia 1 delivering 750 for single-core and 2,756 for multi-core in Geekbench 5. These are pretty much identical to the Xperia 1 and considerably more than the recently launched Google Pixel 4, but less than the  Huawei P30 or Samsung S10.  The Xperia 5 has a 3,140mAh battery. In a looped video test, the 5 lasted 17hrs 55 mins, which is not great. That time puts it next to the Google Pixel 4, which is slightly cheaper and has a few more features. 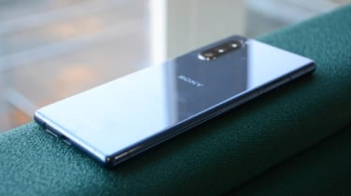 Source: Company
That 21:9 aspect ratio and narrow frame means that it looks odd in landscape mode - all the text is a bit squashed. Also, the dynamic vibration system doesn't fully switch off; anything slightly above the midway point on the volume switch still has a slight rumble.  The fingerprint sensor, which is not only inconsistent, it's on the side of the device, between volume and power buttons, making it a little awkward to use. Same with the NFC sensor; ten minutes in the pocket and it collects all manner of 'tags' that are not there. The screen can be between video and text, so the user can watch YouTube while composing a message - as foldable screens promised us. This is arguably the one feature that is really useful - real-world useful - but again, that already squished text is even harder to see. Other phones support this feature, such as Huawei's P30, P30 Pro and Samsung's Note 10The phone has three 12MP cameras starting with a standard RGB with a wide aperture of f/1.6. The other two are a wide-angle lens and a 2x telephoto zoom sensor. Huawei, Google, Samsung and all are well ahead of the curve and also on the verge of launching the next best thing in their respective areas. However, the co-development with Sony's Alpha camera team provides the first smartphone to introduce eye autofocus tracking and there's also advanced RAW noise reduction filtering tech. Not to mention, 10fps burst shooting. These extras help a rather low key set of lenses (by current smartphone standards) produce quality photos or video content.