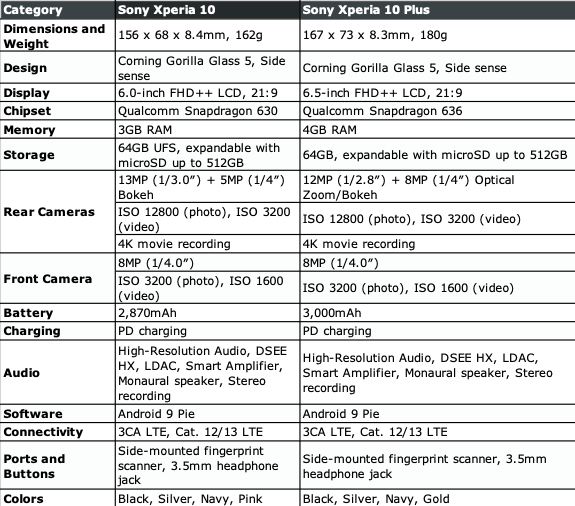 Source: Company
​
There are a lot of similarities between these two phones, and there is also a lot that is different. Both Xperia 10 devices feature 21:9 1080p LCD displays with Gorilla Glass 5 and 64GB of internal storage. They both feature a top-mounted headphone jack, SD card slot, single bottom firing speaker, USB-C, NFC, and side-mounted fingerprint sensor. They also both feature the same body style and build, making them near carbon copies externally, just in a different size. That body is poly-carbonate painted plastic that actually feels really good in your hand, except for the fact that they are outrageously slippery. Since the back of the phone flows around the side to be the frame, there is no solid grip point to make handling easier. The right-side mounted fingerprint sensors are in the perfect location unlike the one found on the Galaxy S10e. Unfortunately, it does not have any other special features like swiping down for a notification shade – something the Xperia XZ2 and XZ3 also lacked. Battery life for the Xperia 10 has less than average battery life and the Xperia 10 Plus coming in slightly above. 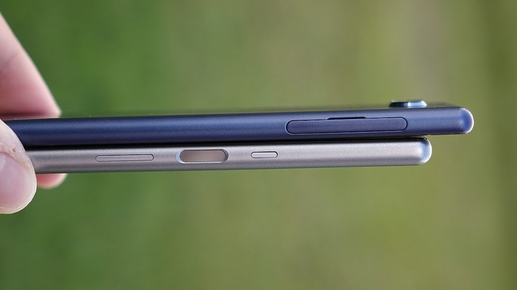 Source: Company
​
​The smaller Xperia 10, has a 6.0-inch 21:9 aspect ratio display mated to a Snapdragon 630 processor, 3GB of RAM (some Asian markets get 4GB), and a dual camera setup like OnePlus uses where you have a primary shooter and a secondary camera that serves little more purpose than being on the stat sheet – it serves for extra depth mapping. In hand, the Xperia 10 is surprisingly comfortable and comparing it to similarly sized devices like the Samsung Galaxy S10e and Pixel 3, it is both narrower and taller than each of those devices thanks to its extra tall display. Narrower devices are easier to hold than tall devices, but they come at the expense of ease of use when trying to pull down the notification shade. Sony placed the display at the extreme bottom of the device having a smaller chin than even the iPhone XS, making it difficult to handle things like a keyboard being cramped on the bottom of the physical device, it does have makes reaching to the top corner of the display slightly easier.


The Xperia 10 Plusfeatures a 21:9 6.5-inch display and taller and narrower aspect ratio than the One Plus 7. The Xperia 10 Plus has a Snapdragon 636 mated to 4GB of RAM, which delivers a better experience than the one that you get on the smaller Xperia 10’s Snapdragon 630, but not by a whole lot. Around back you have a true dual-camera layout both of which feature PDAF or Phase Detect Auto-focus. Unfortunately, the larger Xperia 10 Plus is nowhere near as comfortable to use as its smaller brother. The larger phone is the very definition of unwieldy with a massive unbalance to its design making the phone very top-heavy. I’ve felt phones that seem to want to flip out of your hand, but this is a phone that actually will and does. Compounding the issue is the smooth back to the frame with a rounded plastic corner and a finish that is incredibly flat and slippery. There is no grip on this phone and without a case, it slides right through the hand.

When it comes to performance, Sony failed to move forward and ships both of these at prices that could be competitive with higher performing competitors. The Xperia 10 and Xperia 10 Plus are priced at $349 and $449 The smaller Xperia 10 with its dismal 2017-era Snapdragon 630 delivers a lackluster experience with significant delays when unlocking, application opening, and general UI responsiveness. The phone ships with only 3GB of RAM which means most times 80% of RAM is utilized and makes most applications require redraws after only a few minutes of not being in the foreground. The Xperia 10 Plus ships with last year’s Snapdragon 636 which is a step up in performance. The biggest difference is the reduction of application redraws due to 4GB’s of RAM. Google recently launched the Pixel 3a and Pixel 3a XL, Google’s Pixel 3a and 3a Plus both ship with a flagship topping camera experience and Qualcomm Snapdragon 670. The two phones ship with differing camera setups with the larger Xperia 10 Plus having a true dual camera setup with a 12MP f1.8 27mm primary shooter and 8MP f2.4 53mm telephoto shooter. The smaller Xperia 10 also has a dual sensor but only shoots with one, using the other for extra depth data like OnePlus phones. That primary sensor is 13MP, f2.0 and also stands at 27mm, and the depth sensor is 5MP. The cameras aren’t comparable to other $349 and $429 phones and underperform compared to what other devices are capable of at this price, especially true with the Xperia 10 Plus.

Looking to the future, Sony is quietly preparing to release a foldable phone under the Xperia product line. This device is said to use Samsung’s flexible OLED technology. The device will be called Xperia F and it is believed to be followed by the release of the next-generation Xperia 2 that’ll continue the main smartphone line of Xperia series. The new phone has an aspect ratio of 21:9 which means this device with an aspect ratio of 21:18 is similar to having two Xperia 1 phones side-by-side. The only way for this design to work is if it is foldable. Sony hopes to use the delay in the Fold as an opportunity to market its Xperia 2 well and establish a strong presence in the foldable display market. the Xperia 2 5G will launch in 2020 alongside the PlayStation 5 (PS5). There is speculation that its arrival alongside the next-gen Sony console may mean it will have some gaming features. Sony no longer sells Xperia phones outside its major target markets in Europe, Japan, Taiwan and Mexico. If the new Sony foldable device is truly an Xperia device, interested consumers in the U.S. will have to obtain the device from these countries.