Sony continues its commitment to hi-res music and the 3.5mm jack with its all-new Xperia 1 III and Xperia 5 III, which is  full refresh of its Xperia phone range, headed up by the Xperia 1 III and the Xperia 5 III (the follow-up to the five-star Xperia 5 II). The new third-generation Xperia handsets are virtually identical with almost matching features and specs, but the main difference lies in their screens. The Xperia 1 III sports a 6.5in 4K OLED display – designed for those who like a big screen device – while the 6.1in Full HD+ Xperia 5 III is a little more hand and pocket friendly. The big draw for both gamers and film fans on-the-go will doubtless be the flagship Xperia 1 III, which according to Sony has the world's first 120Hz 4K OLED screen, built by Samsung, which produces a record 678 ppi. It has a 21:9 aspect ratio for full width cinema and gameplay, and that refresh rate can be set to 60Hz if you want to save on battery life. Plus, there's even space to throw in extra frames for Sony's 240Hz motion processing tech which should smooth out any blur. The OLED on each of these phones is individually factory calibrated with what Sony says is a highly accurate white point to mirror the color reproduction of the company's film industry monitors. They also benefit from a mobile version of Sony's X1 Bravia TV engine for HDR processing. 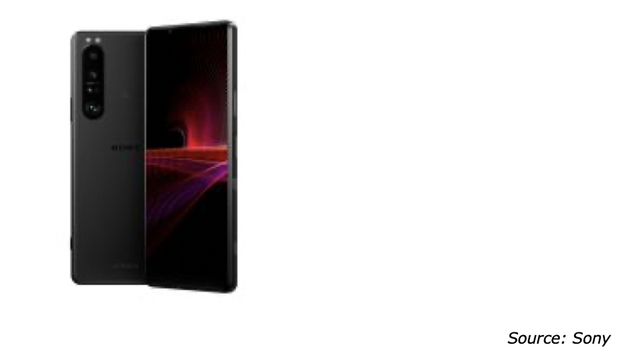 Sony has continued its commitment to quality sound not only with its support of a 3.5mm headphones socket but also its offering of hi-res audio over wired or wireless headphones. They feature newly optimized audio circuitry aimed at improving loudness by 40 per cent while reducing distortion. Most interesting of all, though, is that it can up-mix your local and streamed two-channel music tracks into 360 Spatial Sound in real-time. That should offer some very interesting insight into Sony's emerging immerse format. Both handsets are Dolby Atmos-enabled and have front-facing stereo speakers that Sony promises will have enriched bass and a build to reduce vibration. You'll also be able to appreciate your tracks in 360 Spatial Sound through the speaker as well as headphones. They are powered by Qualcomm's Snapdragon 888 chip and boast a 4500mAh battery that Sony says will remain in top health for a minimum of three years. They come with 12GB RAM and the option of either 128GB or 256GB of storage space. The Xperia III family is replete with the kind of Zeiss photography smarts to make most compact cameras blush. Both the Xperia 1 III and Xperia 5 III come with a 12MP triple lens camera that can handle four focal lengths (16, 24, 70 and 105mm) thanks to what Sony says is the world's first dual-position telephoto sensor. The company has made advances with its AF tracking, its AI detailing for digital zoom and has added burst shooting of 20fps with autofocus and auto exposure. There is no support for 8K video shooting, but the phones can capture 4K video at up to 60fps as well as at 120fps for slow motion. There's also the option of plugging your Xperia into a Sony Alpha camera to use the mobile as a large viewfinder monitor for stills and video. Pricing isn't currently available, but both phones will launch at the same time in early summer this year along with Sony's mid-price phone, the Xperia 10 III. It's a 5G handset, like the others, and it still gets the 4500mAh battery – a considerable improvement on the 3600mAh unit from the previous model. It has a 6in, 21:9, HDR OLED display, coated in Gorilla Glass, and at 154 x 68 x 8.3mm is marginally smaller than the Xperia 10 II. There's no 360 Spatial Sound but there's plenty of decent audio specs with support for hi-res audio (wired and wireless), LDAC and a 3.5mm socket. Under the hood is a slightly lowered powered set-up of the Snapdragon 690 processor, 6GB RAM and 128GB of storage space. It has an 8MP front-facing camera, an 8MP 16mm ultra-wide lens, a 12MP 27mm wide and an 8MP 54mm lens for portraits.  All of the Xperia phones will ship with Android 11. The Sony Xperia 1 III will cost 99,990 rubles (~$1,308), with a set of XM3s thrown in, and a scheduled launch date of July 20, 2021.