Smartphones on the Edge
February 02, 2020
​
In 2015 Samsung introduced the Galaxy S6 Edge that allowed icons to be set on the right edge of the smartphone display as noted below. The idea was ahead of its time but was riddled with problems and Samsung later dropped the feature. 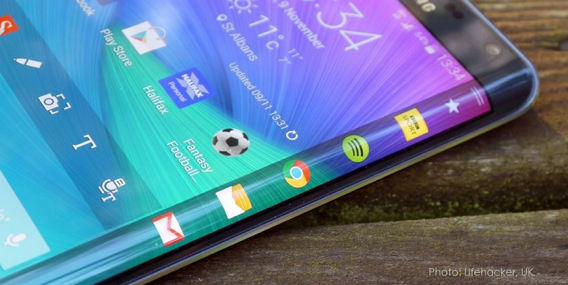 Source: Lifehacker, UK
Last year Huawei introduced dual-sided controls with the Mate P30 Pro. While consumers liked the feature, it was treated more as an afterthought by Huawei fans who were more interested the P30's camera.

Source: Company
​
Samsung thinks it's a feature that they may want to match or challenge Huawei with sometime in the future. Huawei was smart to bring this feature to market because it eliminated the up and down volume buttons which improves the phone’s water resistance

Samsung recently filed a patent that offers a mix of their old side icon idea with Huawei's volume slide bar which Samsung identifies below in the patent figures as "squeeze bars."

Initially, the user interface includes a menu and the first action may be one of a click, a drag, or a scroll for executing an action associated with an item of the menu.
As Samsung works to stay ahead of Huawei and remain the number one volume smartphone maker, every new feature introduced by Huawei is seen as a potential threat. Regarding Apple, they have a long standing patent dating back to 2011 as a patent application for a secondary side display for icons and controls. Apple has been granted seven patents for this invention since that time starting with one in 2014 and ending with their most recent granted patent being issued by the U.S. Patent and Trademark Office on December 31, 2019.

Source: Patently Mobile
Apple also has an alternative granted patent for an iPhone with a flexible display with bent edges like Huawei's P30 Pro. This design may or may not support icons but could supply a Huawei-like feature where the user taps the side of the display to pull-up the volume button controls. Once again, eliminating their current physical buttons would make the iPhone more waterproof. So, there's a distinct advantage to this concept.

Samsung's U.S. patent application was filed in Q3 2019 which is clearly a Samsung idea reinvented. It's not a part of their 2015 feature. The U.S. Patent and Trademark Office published Samsung's patent filing earlier this month.  In June 2018, OPPO unveiled the Find X — the first device to feature a slider mechanism and a bezel-less design. Late last year OPPO was prepping up to launch its successor — the OPPO Find X2 — featuring a Snapdragon 865, Sony’s latest Image Sensor, and a better display. Now, an NBTC certification filing has revealed that the Find X2 will be accompanied by a more premium OPPO Find X2 Pro. Both the OPPO Find X2 and Find X2 Pro were recently spotted in a certification listing on Thailand’s NBTC website. As per a recent report from Mysmartprice, the listing reveals that the OPPO Find X2 Pro, with the model number CPH2025, will also be launched this year. A recent tweet from Ice Universe suggests that the regular Find X2 will feature a WQHD (1440p) display with a 120Hz refresh rate. The tweet further adds that the OPPO Find X2 will include support for 65-watt SuperVOOC fast charging which will be able to charge up the device to full in just 35 minutes similar to the Lamborghini variant of the OPPO Find X.