Apple is using of LIDAR in the two high-end iPhone 12 models, similar to the system it used in the iPad Pro as did Samsung in the Galaxy Note, S10, and S20, smartphones last year. However, Samsung did not include TOF in the more recent Note 20 flagship phone, and there are rumors that TOF might not appear in the upcoming Samsung Galaxy S21 family, due out in January 2021.

One of the reasons that Samsung apparently discontinued the use of TOF sensors in the most recent Galaxy Note was the underperformance compared to Sony’s chip used by Apple. Sony and Samsung took different approaches to TOF sensors, and while that might not account for all of Samsung’s frustration with Sony, the tradeoffs are indicated below. 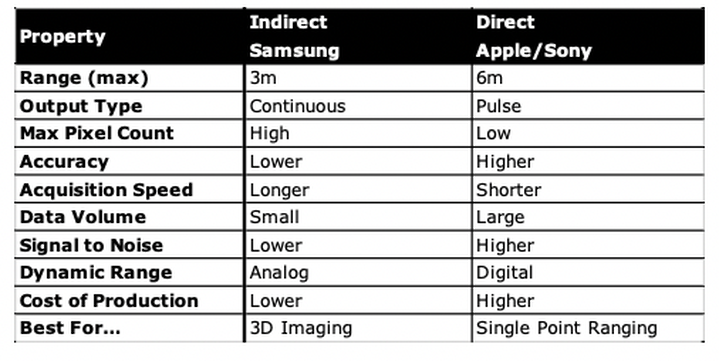 Source: SCMR, 3D-ai.mediaum.com, ams
​
Samsung has not produced the TOF sensor used in previous models, but Samsung announced the ISOCELL Vision 33D, the company’s first TOF sensor, the ISOCELL Vision 33D. Samsung claims the device has a distance range of 0.2m to 5.0m with a depth accuracy of between 10% (indoor) and 20% outdoor, supports a frame rate of 120fps, and draws 160mW (400mW including illuminator. If the Samsung ISOCELL Vision 33D specs turn out to be comparable to those of the Apple/Sony TOF sensors, then expect to see Samsung return to using TOF sensors in its high-end smartphones and migrating the technology relatively quickly into lower priced models. Sony, the leader in the image sensor market (~50% share) has the most to lose but Samsung is still far behind at ~20%.  Samsung has the ability to maintain a strong share even without substantial outside customers. In the TOF space, Samsung is expected to offer the new TOF to other smartphone brands and compete directly with Sony in that segment for the first time with commercial customers.SK Hynix showed a prototype TOF last week and both Infineon and ST Micro are expected to release their own TOF sensors next year, ending Sony’s domination of the market and likely lowering prices, which we expect will stimulate the proliferation of TOF in mobile devices. 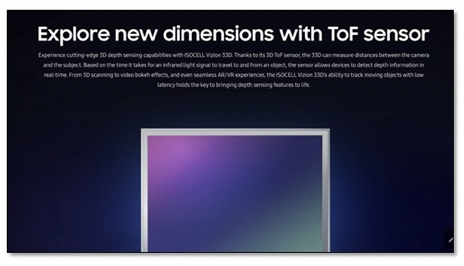 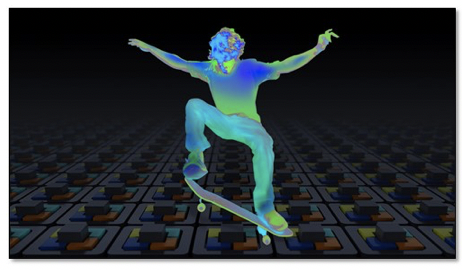