Google is working on smart contact lenses to measure the glucose level of a person’s tears — and perhaps help reduce the damage caused by diabetes. “It’s still early days for this technology, but we’ve completed multiple clinical research studies, which are helping to refine our prototype,” wrote Google’s Brian Otis and Babak Parviz back in 2014. Seven years later, Verily’s smart contact lenses are nowhere to be seen; the side project of Google parent Alphabet was officially abandoned in 2018. Nonetheless, there have been many efforts to advance contact lenses, of course. Acuvue sells Oasys with Transitions lenses that automatically darken in sunlight, like tiny sunglasses for your pupils, and researchers have been working for years on smart lenses that zoom on demand, measure chemical levels in your body, and administer drugs (notably antihistamines). Smart ones never really made it to market.

InWith Corp. is about to change that. At CES 2021, the company unveiled a method to place augmented vision display chips into the soft hydrogel contact lenses that millions of people wear daily. Smart contact lenses! In early 2020, the company announced a partnership with Bausch + Lomb, showing flexible electronic circuitry embedded directly into lenses and they’re clearly almost here — and not just from InWith. “It’s closer than you’d think, but it’s not tomorrow,” Steve Sinclair, senior vice president of product at Mojo Vision, said. We featured a story on Mojo Vision in May ’20 about lenses embedded with an array of proprietary technology, including a MicroLED display under half a millimeter in size tiny inertial sensors such as accelerometers and gyroscopes, a super-efficient image sensor to gauge the world around you, adorably tiny batteries, and more. 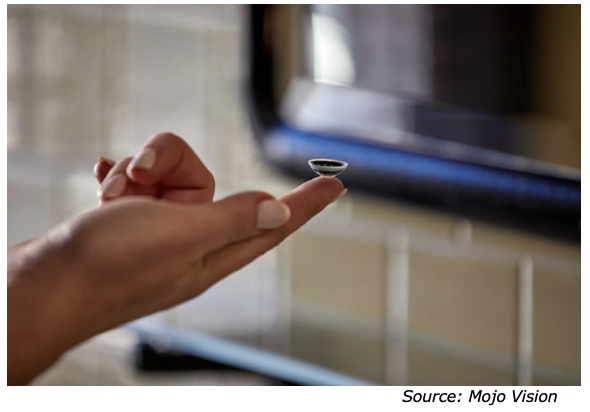 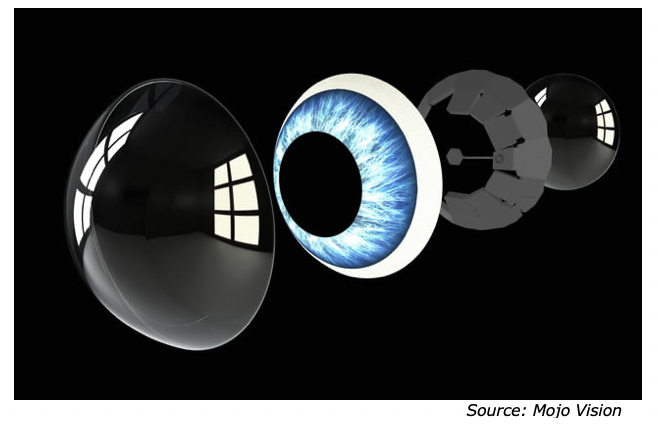 Similar to InWith’s lenses, Mojo’s are “just around the corner,” according to Sinclair. A dozen people in his company have worn the latest prototypes, and a new model out this summer promises even more advancements. They are targeting AR with direction overlays that guide the wearer through unfamiliar city streets, information about the people and buildings nearby. Sinclair offers different use cases: things like the text of a big speech, notes for a presentation, a checklist for a major repair project, and so on. Today’s runners have a world of metrics on their wrists, but who wants to navigate a menu while sprinting at top speed? Imagine the power of biometric data directly in the field of view.

Smart lenses hold huge immediate promise for people with low vision — glaucoma, macular degeneration, and so on. Mojo’s chips will be able to take in the scene before a person and in real time add edges to buildings, boost the contrast around signs and people, and help those with dim vision navigate the world around them. This could be a game changer — but it’s just the beginning.

Vision is a complex dance between your hardware (meaning your retina, lens, the tiny rods and cones tucked away in there, and so on) and your brain, which interprets the electrical impulses sent from your eyes and translates them into images. Your brain accommodates for flaws in your hardware, to some extent. In the future, it may not have to.
Smart lenses could someday correct for an imperfect lens, or even replace it entirely, fixing those electrical impulses before your brain receives them for interpretation. Smart lenses could also interject different data before your lenses, giving you super-binocular vision, or infrared vision. Heck, researchers have already scienced up supermice with infrared vision. Why not you? The potential powers you could receive with a fresh pair of contacts is limitless, once the tech is perfected.
“We’re just on the very precipice of figuring out what some of those things are,” Sinclair told me. “The sky’s the limit on what we can do with the information and the platform we’ve built.”
“It’s like talking to Siri 15.0.”
​
Peer further down the road, into the post-smartphone era, and lenses like this could replace our very eyes. Futurist Gary Bengier, a former Silicon Valley technologist, writer, and philosopher, envisions a world 140 years from now, where displays aren’t just worn in contact lenses but are actually part of you, thanks to a chip inserted behind your ear and connected to a corneal implant. In his new book Unfettered Journey, he describes how artificial intelligence and mind-machine interfaces combine with retinal implants to essentially build Wikipedia directly into your body:
“He picked out the distinctive towers of an occasional fusion plant. Joe hadn’t taken a long flight since grad school. The scene below him awakened his scientific curiosity. He let the keyword search fill his head, opening the NEST corneal connection, and images and words filled the viewer occupying the corner of his eye.”

“You basically use this to connect to the cloud, the net, whatever. It’s like talking to Siri 15.0,” Bengier told me recently. In the not-too-distant future, he believes, smarter artificial intelligence will combine with data about where you are and sensors that pick up on your every whim. You’ll be able to simply think about pizza and you’ll see a little map on your cornea showing where you can buy one. 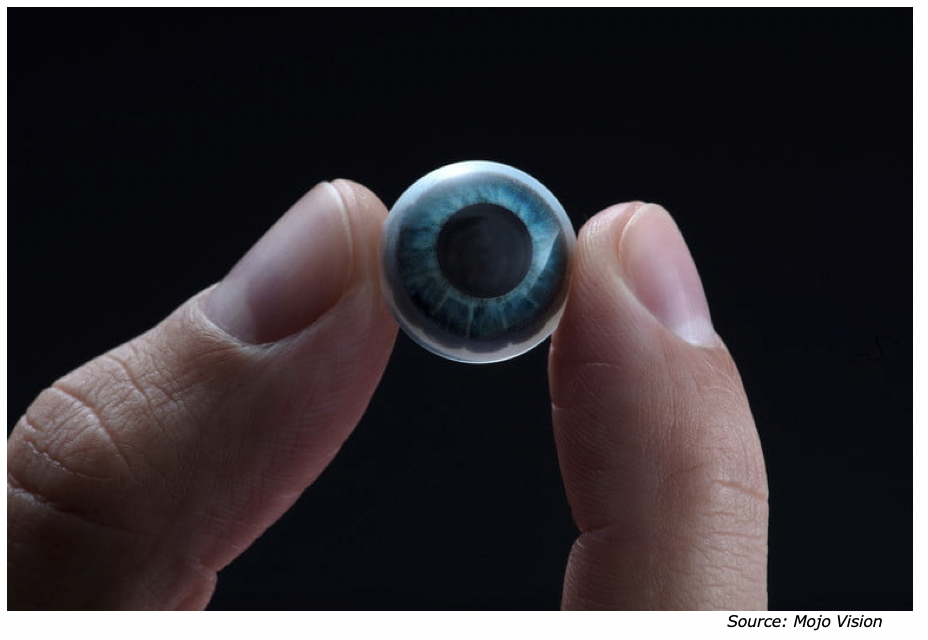