​One of the new features announced at Apple’s WWDC in June was sleep tracking. Sleep scientists believe getting into a bedtime routine, going to sleep and waking up at the same time throughout the week improves longevity. Instead of providing sleep scores or breaking down a night's sleep by different sleep stages like Fitbit does, Apple is going to calculate the amount of time slept. Apple's sleep tech tracks duration of sleep, movement disturbances and heart rate. The content of sleep isn't analyzed much at all. Instead, Apple's placed a big focus on the time to go to bed and what to do while winding down.

Apple's VP of Technology, Kevin Lynch says that sleep has been part of the plan since the watch debuted five years ago. The company's been researching sleep tech for years, running private sleep studies and using EEGs to measure sleep against what a device like the Apple Watch can record.

Apple's Wind Down feature on the iOS 14 is part of the Apple Watch's sleep experience, too. Originally provided on the iPhone it lets the wearer set bedtime and wake-up alarm times and then tracks whether the iPhone is used during the downtime. Wind Down expands on that feature, and it also connects to helpful apps that could be part of that routine. Apple sees the wind down and the bedtime routine as an important part of sleep quality. "Many sleep apps show information about REM cycles and other data like that," Lynch says. "And we've looked a lot into that."
But Apple's research has found something else is more important: the amount of time slept. "Even in our studies, we had people wear EEGs on their heads, so we got insight into the electrical activity of their brain, in addition to what we're able to sense on the wrist with Apple Watch," Lynch says. "And we've learned a lot about how the main thing here is really about duration." Lynch says that Apple decided not to show more complicated estimated sleep data because the company's sleep studies didn't show results that felt useful: "Movement of your arm is an input, but it's not a complete picture of what's going on inside your brain," he says. Third-party apps can show deeper estimated sleep analysis, but Apple believes "that it can be overwhelming and stressful to look at that data," Lynch says. "You can't really coach yourself to have more or less REM stages," he says. "We felt like that wasn't the best way to add value here on sleep. We focused on the transition to the bed, which we think is way more actionable, and will result in people getting a better night's sleep, which then has secondary effects of perhaps your REM stages sorting themselves." 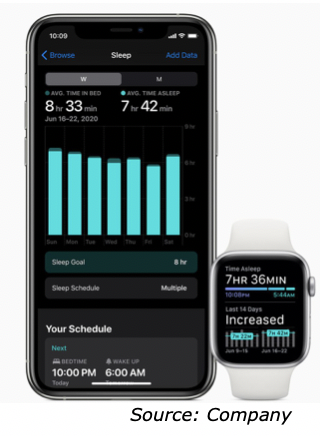 Sleep patterns can be tracked in Apple's Health app, but there's a conscious move away from pinging people to fix bad habits or alerting them to nights with suboptimal sleep. Instead, notifications and reinforcements are all positive, similar to what Apple has done previously in the Health and Activity apps. If a sleep goal is met or beaten, there's positive feedback. If the goal isn't met, the app will aim not to flag it. "There could be anxiety that people have about going to sleep, and that anxiety itself can actually cause more problems in terms of going to sleep," Lynch says. "Many people are already well aware that they haven't been getting enough sleep, and so we're not adding to that, but we are positively acknowledging when you have achieved your goals."

Companies like Fitbit have used anonymized user data for years to study demographic sleep patterns and improve observations on sleep, but Apple doesn't plan to do that. Apple has been building its machine learning models from data collected through internal studies. "And that takes a long time. So, we've been working on this for a while," Lynch says. "We treat the data that's being collected on a user's device with a high level of sensitivity around privacy. …  Apple is not seeing the watch sleep data." Like other sensitive information collected by Apple devices, stats about sleep stay on your device.

Apple has public health studies for areas like heart health, hearing and women's health, which are enabled through separate opt-in research apps, it has no public sleep studies yet. Instead, "has been doing our sleep studies internally with thousands of people," Lynch says. Apple could eventually open a public sleep study, if the company intends to study deeper links to conditions like sleep apnea.
​
Fitbit has enabled blood oxygen measurement on its recent trackers with the aim to provide deeper sleep analysis or sleep apnea detection, although no FDA-cleared results have taken place yet. The connection between fitness trackers and accurate sleep analysis has been fuzzy.

Existing Apple Watches will need at least 30% battery life on a charge before tracking sleep at night. If the battery level's lower, the watch will request a charge-up. The Apple Watch 5's battery lasts about 18 hours, and can be charged to 80% in 1.5 hours and 100% in 2.5 hours. Apple's sleep tracking dims the display and reduces background activity, showing a basic watch face and the date or alarm if a button is pressed.

Most, including me, charge the Apple Watch every night, leaving wearers to decide whether to top off in the morning, charge a bit more at night, or just skip sleep tracking. Apple removed pressure-sensitive 3D Touch from the iPhone 11 Pro and gained considerable battery life in return. Perhaps the Apple Watch 6 will include this fall and help sleep tracking be less awkward.

Musing’s take: Most people, don’t obsess over sleep, so this app will have limited use especially of it requires a change in the charging pattern. However, for people who think they might have sleep APNEA, a condition where a person stops breathing for short periods of time, it could save an overnight stay in a sleep disorder studio, where the condition is diagnosed. Killer app – Don’t think so
​