Vertical Divider
Skin Displays Will Give Wearables Their Independence
​
Yoshiaki Tsutsui University of Tokyo has developed stretchy, thin, bright, water-resistant displays that stick to skin without adhesives are going to start appearing in coming years. They'll be on the hands and arms of the elderly and those of athletes, travelers, hipsters, and early adopters. They're going to unobtrusively update runners and cyclists on heart rate and hydration needs, ultraviolet exposure, and even show maps of the route ahead. They'll be used to send secret messages between friends and lovers. The fashion-forward will undoubtedly flash messages and vital stats at each other at parties and festivals. Such a display might even share emotional cues with observers, suggesting that you are interested, anxious, available, or excited. Depending on the setting, it might foster friendship, deeper communication, or splendid isolation. For the elderly or infirm, these displays could show electrocardiogram waveforms, collecting the data from wireless electrodes placed elsewhere on the body. They could also alert someone who is hard of hearing to an incoming phone call or a knock on the door. 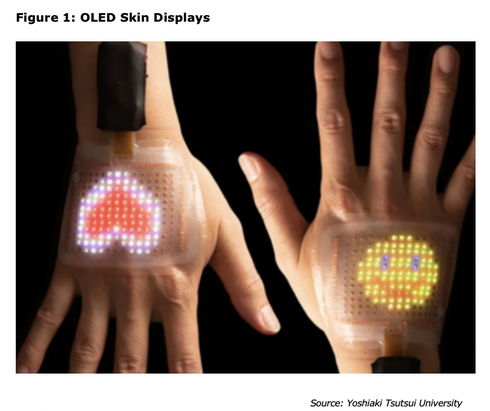 ​While the first applications of wearable displays will likely communicate health and wellness information, the possibilities are endless. The locations where we place these thin, flexible, stretchable displays won't be limited to skin; the displays will be equally easy to apply to the curved surfaces of clothes and other objects. Their color, brightness, or patterns could change in response to an activity or in reaction to the environment.

The emergence of thin and flexible circuitry capable of twisting, bending, and stretching, is allowing the affixing semiconductor circuits to their skin, wrapping them around the curved surfaces of a hand, an arm, a calf, or a torso. The first generation of these stretchy wearables are sensors that are measuring vital signs in hospitals and elsewhere. And Gatorade, the sports-drink company, released a flexible sweat-monitoring patch earlier this year. To get useful information from these sensors, users still have to take out their smartphones or consult a nearby computer. Smartwatches aim to make getting this information less cumbersome, but some people find them clunky, and the tiny displays can be hard to read. 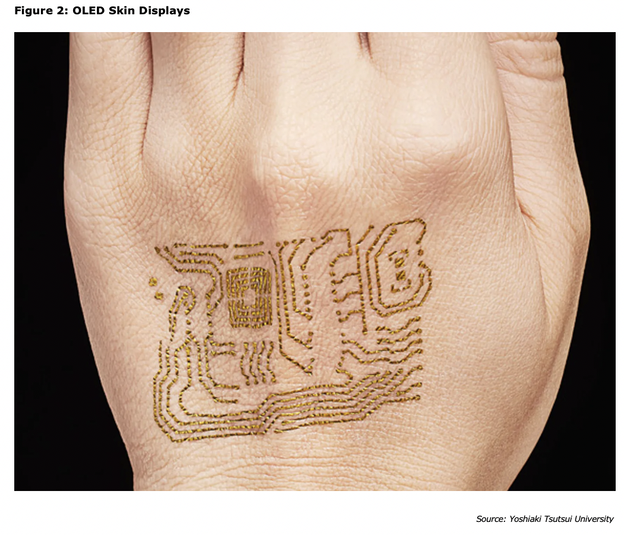 ​The University of Tokyo's Organic Transistor Lab at the school of engineering. Finds conventional display technology difficult to make flexible. While televisions that roll up and smartphones that fold are finally available, they're really expensive. And they can roll or fold in only one direction; they can't twist or stretch. Now, truly flexible, bright displays are close to fruition, poised to feed us the information we need, no phone required. The research group has developed and demonstrated several versions of such a skin display. And Dai Nippon Printing Co. is working to bring our skin-display technology to market, likely getting there within the next three years.
Displays based on OLEDs are printable onto thin, flexible substrates. Today's rollable displays take advantage of that capability. To date, however, no one has yet commercialized an OLED display that can stretch and bend in multiple directions, although Samsung has reportedly been working on one. The group produced a prototype low-resolution OLED display. It will take researchers a considerable amount of time to develop a stretchy, long-lasting material that can also be used to protect devices against oxygen and water vapor.