Sharp and Japan Display (JDI) disclosed a plan for the transfer of ownership of the Hakusan fab (D3, G6: LTPS, with a production capacity of 25K/month). Sharp gets a 6th Gen fab, a majority of Apple’s iPhone (LCD) business at no cash cost and JDI fulfills its obligation to repay Apple for the prepayment of panel orders not received.

The key elements of the deal include:


Apple is supporting both JDI and Sharp and the deal looks positive for them both. Apple wants to recover prepayments from JDI and also requires the restart of D3 operation for the LCD versions of the iPhone, but JDI does not have the capacity to do this, so Apple asked Sharp to help.

Sharp is doubling down on its small/medium panel production at Kameyama 1 (G6: LTPS), Kameyama 2 plant (G8: IGZO) while it will G4 (A-Si) and G4.5 (LTPS) plants that have been in operation for 15 years or more. Sharp will produce panels for auto and other applications at the Kameyama 1 plant, which presently makes iPhone panels. Securing the D3 plant frees up capacity at Kameyama 1 for non- Apple production in addition using the Apple’s advance payment to JDI ($390m) frees Sharp from make a cash expenditure, because it will lease the production equipment from Apple and use the iPhone panel sales to repay the advance. The LCD panel share for the iPhone is expected to rise from about 35% in 2020 to 60%-70% after 2021. Becoming involved in the plant operation also provides the benefit of acquiring expertise and the accompanying TFT (Array) and cell production processes of JDI. In addition, Sharp may expand the share of its current panel production panels for the iPad (estimated at 30%) and the MacBook (just over 10%) given its policy of concentrating the Kameyama 2 plant on panels for IT devices, such as tablets, notebooks, and monitors. Moving to strengthen ties to Apple is a desirable. The D3 plant was originally designed for a standard output of 50K/month, so has considerable room for expansion. As also noted in the Nikkei article, Sharp could invest together with Apple in new displays, including μLEDs, in the future.
D3 is JDI's state-of-the-art plant with all of its best technology. JDI was forced to sell because of the management crisis of the past few years. Benefits include the booking of profits on the sale, an improvement in the company's financial position as it repays advances, and the elimination of D3 operating costs (at least ¥500m a month). JDI will continue producing iPhone panels at the Mobara fab but its market share will from just under 50% to 30%-40%. LG Display is expected to halt LCD iPhone panel production leaving Sharp and JDI to split LCD production from 2021. From: Mizuho Securities 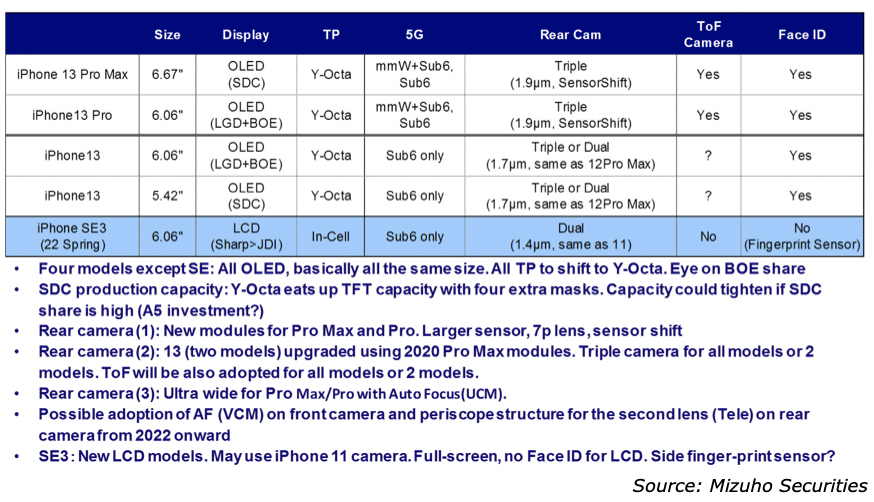