Vertical Divider
Sharp Considering Taking Controlling Interest in Sakai Gen 10 fab
July 29, 2019
​
Sharp, anticipating the growth of TV panel sizes built a Gen 10 fab (2880x3130) with an ultimate capacity of 72,000 substrates/month in 2009 assuming that as panel sizes increased, Gen 8.5 fabs would be less competitive. .  Sharp was correct in their assumption about TV panel size growth, but a few years too early, and the fab, which at the time was considered a manufacturing marvel, was actually too small. The most efficient size for 55” panels is the Gen 8.5, which can produce 6 55”panels/substrate and for 65 and 75” panels, the Gen 10.5 is most efficient, leaving the Gen 10 somewhere in the inefficient middle. 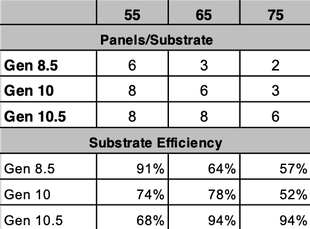 Source: OLED-A
​In 2012, Terry Gou, the founder and Chairman of Hon Hai saw potential in the fab and became a 53% stake in the facility.  Sharp itself remained a major shareholder, and currently has a 26.7% stake, but the purchase included a stipulation that Sharp would purchase ~50% of the Sakai fab’s output over a period of time.  SDP (Sakai Display Products) has had its ups and downs since the Hon Hai purchase, losing money in 2016, making money in 2017, and losing again in 2018, but at least the industry began to catch up to the idea of Gen 10 fabs, with two Gen 10 fabs beginning production currently and two more in earlier stages.  In 2016, as losses mounted, Sharp was purchased by Hon Hai for $3.8b, a relative fraction of Sharp’s value just a few years earlier, but the Sakai plant remained under Gou’s personal ownership.  Now that Mr. Gou has retired from Hon Hai the Sakai assets could again change hands.  Sharp wants the Sakai fab back is interested in building its stake in the Sakai fab so it can operate as a subsidiary of Sharp Corp, which would entail purchasing at least 23% of the outstanding shares.  While tacitly the fab will still be under the broadly defined control of Hon Hai because of its Sharp stake, Sharp would have greater control over how the fab is run and would absorb its financial results as a subsidiary. Despite the off size of the fab, Sharp sees better times ahead for the fab due to the popularity of ultra-large TVs such as 65” and 70”. By the time 2022 rolls around Gen 10 fabs will represent over 15% of overall LCD capacity, which means the competitive situation for ultra-large panels will be even more fierce than today.