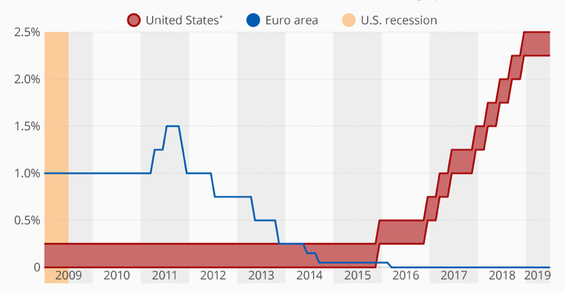 Source: U.S. FED, ECB
​
Is the GDP growth of 2.1% a positive or negative indicator of the economy” It depends on who’s in power, With Obama as president, attacks came from the right and with Trump they come from the left. The latest debate is over real (inflation-adjusted) GDP, some say it showed soft spots from the trade war and weak business investment. Net exports (exports minus imports) trimmed the Q2 real GDP growth rate by 0.65 percentage points. But that follows the Q1 boost to growth of 0.73 points. In the past year, trade has subtracted an average of 0.58 points each quarter. There were larger drags from net exports in 2010, 2014, and 2015, all years without "trade wars." One conclusion net export difference is statistical noise. Real business fixed investment, declined at a 0.6% annual rate in Q2, the first drop since 2016.  But the Q2 decline was almost entirely due to a drop-in brick and mortar investment (what economists call "structures"). In the age of the Internet, software and computers are replacing brick and mortar. As a result, investment in structures has slowed in recent years while investments in technology and equipment have continued to rise. Strip out structures, and real fixed investment rose at a 1.9% annual rate in Q2 2019. More importantly, business investment ex-structures have clearly picked up under the Trump Administration compared to Obama's second term.

​Real business investment, excluding structures, grew at a 3.8% annualized rate between Q4 2012 and Q4 2016, but accelerated to a 5.9% annualized rate since Trump took office. Real Investment in software and R&D grew at a 5.5% annualized rate in the final four years of the Obama Administration versus 7.5% since the start of 2017. Tax cuts and deregulation have indeed boosted "animal spirits." Core GDP – combining personal consumption, business investment, and home building – grew at a very solid 3.2% annual rate in Q2. Meanwhile, profit reports are widely beating expectations. The economy is much stronger than conventional wisdom thinks and has been since 2009. From: Finimize