Vertical Divider
Semiconductor Shortage – Minor Impact on Smartphones
​
Strains in the semiconductor supply chain have worsened in some areas as trends such as remote working combine with an industrial recovery from last year's pandemic slump to drive chip demand, the head of Germany's Infineon said.
The ability of chipmakers to add capacity is limited, while some in Asia face further production constraints as they seek to contain COVID-19 outbreaks in their workforces, CEO Reinhard Ploss told Reuters.

Infineon, the leading supplier of power semiconductors to the automotive industry, relies heavily on contract chip manufacturers such as TSMC with which it is in a "deep dialogue" on meeting customer needs, said Ploss. The chip supply crunch has provoked debate in Europe about whether to invest in new production capacity to reduce its dependence on imports from the Asian manufacturers that dominate the industry. Ploss questioned the goal set by Brussels of building a state-of-the-art 2 nanometer plant. Ploss points to the dearth of computer and smartphone producers in Europe to explain why Europe doesn’t need a 2nm semiconductor fab. The same argument could be made for the US as Apple, HP, Dell and others assemble their products in Asia.

Even the highly publicized shortages in the smartphone market are having only a minor impact. Mizuho Securities, recently updated their smartphone forecast and dropped the 2021 volume by <3% or 40m phones to account for the shortage. Mizuho points to the following to justify their forecast: 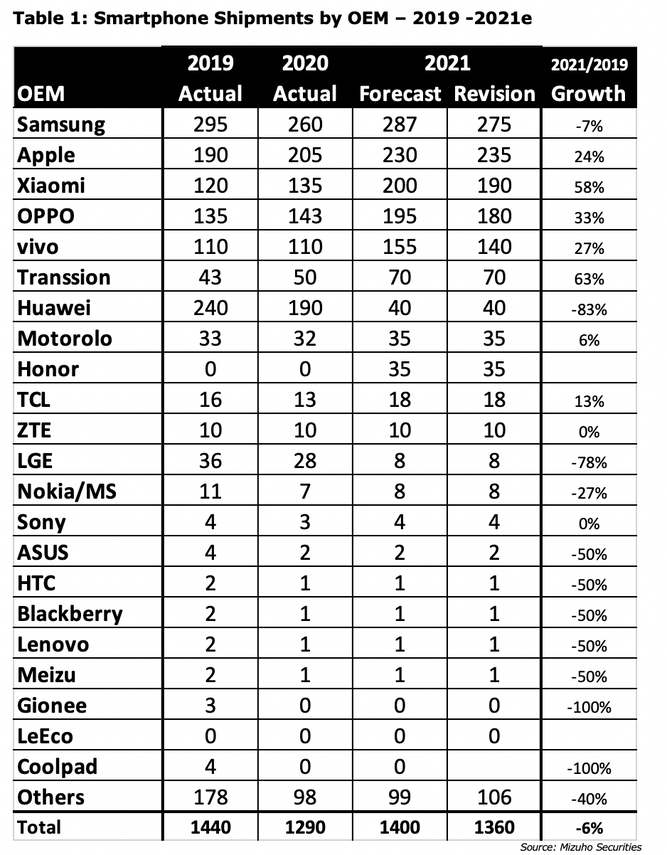