Samsung Display published a teaser video for its new OLED panels that will be used in some laptops going forward. “The expanded OLED lineup will feature panel sizes that include 13.4-inch, 14-inch, and 16-inch screens,” the company added. “These laptop displays will follow in the footsteps of the 13.3-inch and 15.6-inch UHD (4K) OLED models launched in late 2019, as well as the 13.3 FHD (1080p) and the 13.5 QHD (1440p) OLED models that rolled out last year.” “We expect the 2021 sales of OLED panels for notebooks to quintuple from a year ago,” the company said. “As more firms are introducing OLED display-equipped laptops, we will secure more clients to expand the market.” According to market researcher TrendForce, global notebook shipments for 2021 are projected to reach 217 million units, up 8.6 percent from a year ago. Currently, OLED displays are found on premium laptops that start at $1,500 and can easily scale up to over $3,000. The displays are produced on the A2 line that uses rigid substrates, but the OLEDE formulation s the same as panels used in the Galaxy S21 and iPhone 12.

The short, 90-second video highlights some of the advantages of an OLED panel compared to a traditional LCD screen, including higher contrast ratio (1,000,000:1) and darker blacks (0.0005 nits), support 120% DCI-P3 color gamut (compared to LCD screens that offers 74-percent DCI-P3 coverage and 85% HDR coverage. The OLED panels would also work better in direct sunlight, so they can be used outside without having to worry about glare. The latest Galaxy S21 panels have a max luminance o0f 1,600 nits.

The notebook demoed in this video certainly looks appealing. It’s ultra-thin and features a screen with almost imperceptible bezels. Samsung Display is pitching these screens to laptop makers, which means they might not be featured on a Samsung laptop.  The price of OLED laptops is the biggest concern. Screen durability, including burn-in risks, might be another. Samsung will likely address these matters during its upcoming display-centric press conference.

The company said its OLED panels will be produced under the brand of “Samsung OLED” to better promote its products. 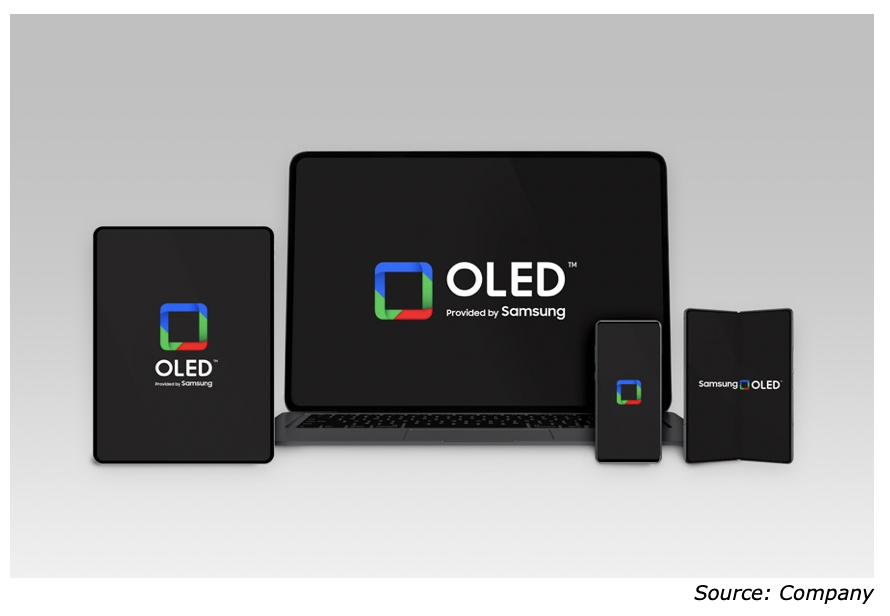 ​The first OLED based laptop was released in 2019 based on a Samsung Display OLED 15.6” screen but have been limited to high-end models due to the higher cost of production vs. LCD displays.  25 models were released in 2019/2020 or about to be released this year, many of which are oriented toward gaming, where the higher price ranging from ~$700 to ~$3,300, is a given.  SDC has accounted for almost all OLED notebook displays produced in 2020, although EverDisplay is also producing small quantities and BOE was expected to introduce a few OLED notebook panels last year, having shown a 14” OLED prototype in August, but has yet to enter full scale production.  LG Display has produced a 13.3” foldable OLED display for Lenovo, but it seems that Samsung Display will continue to dominate the space in 2021.

While the OLED notebook market is relatively small, likely under 2m in 2020, every 13” OLED notebook panel, which is the smallest size for a laptop, uses ~72 in2 of panel capacity relative to a 9:19 6” smartphone that uses 13.9 in2, or 1/5th the capacity.  If Samsung Display is able to generate sufficient volume with the new models in 2021, it can increase its rigid OLED utilization and increase its value/in2.  SDC competes with a number of smartphone OLED panel producers, and while they are dominant in the flexible OLED display market, the rigid OLED display market is increasingly more price competitive as Chinese panel makers increase their yields and higher margin products from those lines will help to increase overall OLED display margins across all of the SDC OLED fabs.