As reported last week, Samsung Display upped its target for OLED notebook panel production by between 37.5% and 50% for this year as overall notebook demand has been higher than expected. Samsung Display is undergoing a number of capacity shifts, particularly its OLED (A4E) line that seems to be ahead of schedule,.  Given the potential for additional production and the notebook/gaming demand, SDC seems more comfortable with higher targets. Samsung Display’s previous target for OLED notebook/tablet  panels had been 4m units but based on its expected shipment schedule, which currently accounts for between 4.2m and 4.6m units, the company believes they will be able to push that to between 5.5m and 6m units.  These are aggressive targets although estimates that over 37% (Y/Y) more OLED notebook panels were shipped in 1Q, has likely given SDC a bit more confidence in the new targets. The good news for notebook brands is that OLED notebooks represent less than 2% of units for most brands, while OLED notebook penetration for Asus and Samsung Electronics are expected higher than average this year, leaving lots of room for growth, with most estimates for OLED notebook unit volume below SDC’s new target.

The table below gives a sampling of OLED based notebooks recently announced. 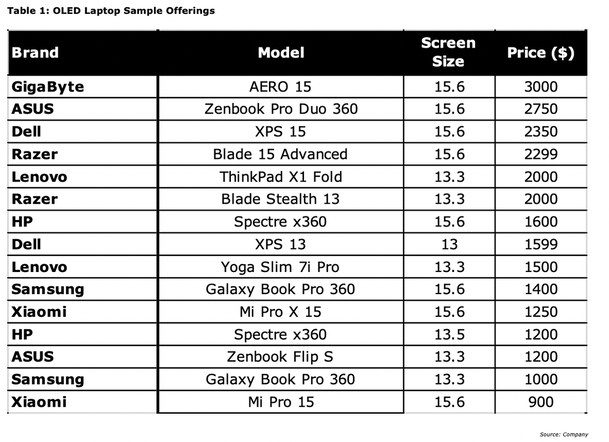