Samsung sells two types of foldable phones and both of them have a single hinge. However, there have been reports in the past regarding a tri-fold Galaxy tablet. According to our source, such a device is indeed in development and may launch as soon as next year.

GizmoChina reports that this device will launch as Galaxy Z Fold Tab in Q1 2022.
The previous leak about this product suggested that it will be releasing in 2021. Unfortunately, that will not be the case. However, we may or may not see a teaser for it during the Galaxy Z Fold3 and Galaxy Z Flip3 launch event, which could take place in early August. This is still being debated by Samsung’s marketing team.
Further, the main highlight of the Galaxy Z Fold Tab apart from its tri-folding capability will be support for hybrid S Pen. This stylus will make its debut alongside the Galaxy Z Fold3 in a few months from now. Unfortunately, we do not have any information about this Bluetooth-enabled stylus except that it will be different from the older S Pens. Lastly, the forthcoming tri-fold tablet will also sport a better UTG (ultra-thin glass) than the current generation. This new thickened reinforced glass will be introduced in the Galaxy Z Fold2 successor. Essentially, the Galaxy Z Fold3 will be a testbed for Samsung’s first folding tablet. Various statements have been leaked about the tri-fold tablet including:
Figure 1: Tri-Fold Design in Action 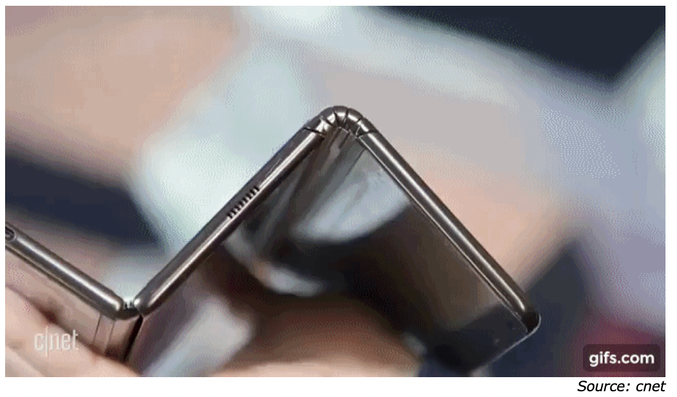 ​
Samsung Electronics has recently received approval for a design patent from the USPTO for the development of the tri-fold tablet. The patent contains information on the hinge of a tablet PC and its overall design. Unlike the Galaxy Z Fold smartphones, the tablet does not have an external display that is revealed when its screen is folded. The hinge part where the screen folds is rather thick and gets thinner as it approaches the border. The overall bezel is slim, but the hinge bezel is pushed a little more inside the screen, creating two notches (one at the top and the other at the bottom). On the side border of the notch is a power button, stereo speakers, a USB-C terminal, cameras and various sensors. Instead, the foldable tablet does not have a display punch hole camera or rear camera like the Galaxy Z Fold. Industry insiders say that Samsung Electronics is likely to introduce foldable tablet PCs to expand the foldable device market currently limited to smartphones. Thus far, tablet PCs have been losing ground as smartphone screens have become larger since foldable phones were introduced. Tablet PCs which people have used to enjoy videos on large screens rather than on small smartphone screens have lost its attractiveness due to foldable phone.
Market research firm DSCC predicted in its 2020 Market Research Report that the foldable display market will expand from smartphones to cover medium and large device markets of tablet PCs and laptops, continuing its average annual growth of 131 percent over the next four years. Lenovo introduced the ThinkPad X1 Fold, the world's first foldable laptop, at the end of 2020. MS is expected to release similar products during the second half of 2021. Dell unveiled a prototype of a foldable tablet PC at the Consumer Electronics Show 2020 held in Las Vegas. "Although existing tablet PCs overlap with smartphones in terms of applications, foldable tablet PCs with displays 13 inches or larger will compete with laptops," said Choi Pil-sik, an IT expert and power blogger.