Mr. Jong-Hee Han, Head of Visual Display Business & President at Samsung Electronics Co., Ltd was seen visiting its new production complex in Vietnam, last month. He was checking on the progress at Ho Chi Min City factory’s change from a manufacturing facility to an ‘export processing enterprise’, which gives it greater tax incentives and reduced import and export duties. In order to qualify for the change, Samsung would have to generate 90% of its revenue from exports sales, which it hopes to do this year, making the Vietnam production complex among Samsung’s largest. While this is just one piece of Samsung’s vast supply chain, Samsung is also spending ~$36m to build out 50 mini-LED production lines in the complex.  The Visual Display division has recently changed its position on mini LCD backlights from a mild interest to a strong commitment after seeing the performance of some Chinese built TVs with Mini LED backlights that also incorporated QD color change films. They believe that these devices can compete with OLEDs and as a result have notified Samsung Display that they will not be participating in the sales of QD-OLED TVs. Since SDC’s only commitment to date for the QD-OLED panels has been Sony, SDC delayed mass production until Q321. This schedule change had been previously reported, but SDC never provided the rationale. Now it is clear. Moreover, the Visual Display division, which is also responsible for monitors and notebooks has agreed to sell QD-OLED high end monitors in the 33” to 35” range, almost as a way of expressing some corporate loyalty. SDC has also changed the design of the panel stack and has shifted from a 3-tandem blue stack to a 4-tandem blue stack.  Apparently using 3 layers did not provide the luminance difference with WRGB that Samsung believes is required to differentiate its product.

The QD-OLED configuration now consists of 4 tandem blue layers and associated common layers, thin film encapsulation and the Ink Jet Printed QDs, designed as red and green subpixels with a clear layer for blue.  However, the QDs must be protected from the ambient light. To block the photons from ambient light that is ~30nm below the emission wavelength:


The following figure compares light loss  of color filters and with the QD blue light suppression. 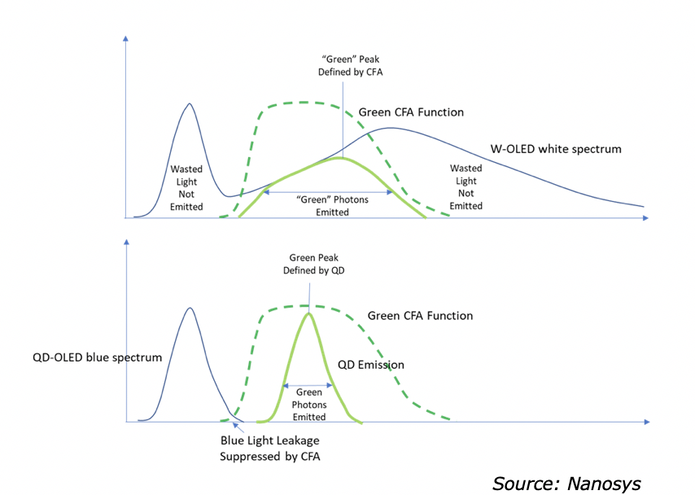 Light loss through the QDs has been improved significantly and according to Nanosys includes:


The total loss is around 15%, which compares to a 66.7% for the color filter used in the WRGB design. The next table compares the light production in terms of cd/A in the white point. The WRGB design produces 71 cd/A and the QD-OLED produces 97 cd/A in raw luminance.  But displays are compared at the white point for which red contributes 30%, green 60% and blue 10%.  When adjusted for the white point consideration, RGBW delivers 69 cd/A and QD-OLED 31 cd/A.

Two other light impacting components are difficult to measure: QD-OLEDs are top emission and use a higher aperture ratio, while RGBW has a white subpixel that is used as a substitute for some colors that would normally require the uses of 2 or 3 primary colors, which improves the efficiency of the device at the cost of additional power to driver 4 subpixels instead of 3.

Another reason that the Visual Display Division was reluctant to sell QD-OLEDs was the value add that they could provide using LCDs. Samsung Visual Display pioneered the concept of buying “open panels”, so they could provide the electronics including the drivers and the backlight.  This process effectively shifts net revenue from the panel maker to the TV maker and is not really possible with OLEDs that have no backlight. The QD-OLED Fab uses an amorphous backplane (IGZO) with ~ 8-10 masks, close to double what the more mature LG RGBW fab uses, increasing the cost differential between the two processes

Samsung Visual Display is expected to introduce at least one or two mini-LED product over the next few months.  With eight factories and an R&D center in Vietnam, Samsung should have no problem finding room to expand its mini-LED assembly capacity if it proves successful with consumers.

Samsung has in recent weeks trademarked 'QLED Neo', 'QLED Platinum', 'QLED+', 'QLED Z' and 'Quantum Matrix', potentially hinting at its plans for 2021 TVs. And even 'Samsung QNED'. Last year, they trademarked 'Dual LED', 'Zero Bezel' and 'Infinity Screen'. The company launched its almost bezel-less "Infinity" Q950TS 8K TVs just two months later at CES 2020 – and started using Dual LED in its mid-range models. Samsung has now trademarked 'QLED Neo', 'QLED Platinum', 'QLED+', and 'QLED Z' ahead of the launch of its 2021 TVs. German site 4KFilme first reported on the QLED+ and Z trademarks but the company has filed trademarks for other variations too, discovered by FlatpanelsHD, in various regions. All filed as trademarks related to televisions. The company has also trademarked 'Quantum Matrix', which most likely refers to the LED backlight in an LCD TV – perhaps the miniLED-type mentioned before. It has even trademarked 'Samsung micro LED' and 'Samsung QNED', where QNED refers to Quantum Nano(rod) Emitting Diode. Lastly, it has trademarked 'Wireless Rear Speaker Compatible' under the categories 'Televisions; Audio speakers', perhaps suggesting that buyers will be able to wirelessly connect optional rear speakers to their TV.

Separately, DSCC in a report on Micro LEDs concluded that even by 2026 the technology will be constrained by high costs to a small segment of the TV market. At CES 2020, Samsung announced microLED TVs for a third time,promising to bring "home-ready" 75 to 150-inch models to the market this year. MicroLED TVs, pursued by Samsung Visual Display are looking to the consumer market but Samsung's plan for 2020 was unsuccessful even as Jong-Hee Han made a commitment to the Samsung Chairman’s office. Samsung Electronics, which houses both divisions, is now a microcosm of the TV industry, where the battle for TV display supremacy looms between micro LEDs, OLEDs and QD’s.

The DSCC’s report moderates the short-term prospects for microLED TVs, pointing to high costs, fierce competition and the challenge of going to 8K resolution, which would quadruple the number of microLEDs from 25m for 4K to 100m. They estimate sales growing from ~$30m in 2020 to $225m by 2026.  The basis of the projection is Samsung’s “Wall TV”, which can be configured in sizes ranging from 146 inches to 292 inches diagonally and boasts 1,600 nits of brightness. Resellers are listing the modules for $16 to $23 thousand dollars each. These individual modules measure 31.75 x 17.86 inches, but have an individual resolution of 960 x 540 pixels. It takes 16 of these module, to set up in a 4 x 4 configuration that measures 146 inches diagonally. DSCC put the average price at $300,000. Based on these figures the number of TVs shipped in 2020 comes to 116 and DSCC presumably forecasted 1200 by 2026 as shown in the next figure.

​DSCC said, "It will be a huge challenge to compete, even in the premium TV category. OLED and quantum dot LCD are already well established in this space. Several TV manufacturers are also introducing LCD with miniLED backlights, with much improved contrast. Dual Cell LCD is another possible contender. Meanwhile, Samsung Display is preparing to mass produce QD-OLED panels that will compete with LG Display’s White OLED …MicroLED TVs will occupy a niche in the very large TV market, where LCD panels are no longer cost efficient. They will be popular amongst home theater enthusiasts but will not become mainstream. DSCC forecasts that microLED displays will likely find more success in other applications, such as AR/VR and Wearables."

A report by IHS Markit, previously projected, that microLED TVs will take the first step into mass-market territory in 2026, capturing a 0.4% market share. (~1m units)

The work being performed by Aledia and NA nanotech, which we have written about, to develop nano size RGB emitters on a single wafer could mitigate the cost issues in TV production, but these solutions are still in the development phase. Aledia plans to use MOCVD equipment with a single 12’ Si wafer and their costs for LED production are quite attractive. Our assumptions regarding the costs of Micro LEDs, are based on:


While Samsung Visual Division was unable to deliver on their consumer based µLED
TV in 2020, they seem to have substantial capex budget to solve the transport problem.