​TOF (Time-of-Flight) sensors provide information about the objects that are within a field of view, in relation to cameras and autonomous vehicles.  Since their adoption in smartphones, which dates back to the June 2014 release of LG’s G3 smartphone, TOF sensors have become more sophisticated and important to smartphone camera systems. TOF systems do have limitations and there are alternative methods of performing similar functions, primarily stereo optical and structured light (see below), each of which have their advantages and disadvantages.  TOF systems have a number of characteristics that make them ideal for smartphones, particularly their cost and processing requirements, which are critical to smartphone design.  Additionally, as they are used for AR/VR, their ability to be accurate over ~15’ and their small physical size gives them advantages over other modalities.

​While there are several smartphones of different brands that have adopted TOF sensors, Samsung is one of the strongest proponents, not only using the TOF sensor as a camera adjunct, but also as a tool for enabling the overlaying of objects on visual images, essentially augmented reality or AR. Samsung’s is using TOF in a number of its high-end smartphones and its pushing the technology down to the mid-tier Galaxy A20, but not in the Galaxy Note 20, even as the Galaxy Note 10+ had a TOF sensor. The lack of TOF in Samsung’s flagship Galaxy Note line is not a technical issue or a lack of desire but a function of  Sony’s success with the technology creating in essence a backorder condition. Sony began to ramp up production a bit over a year ago which has kept supply tight.

​What seems to have made an even bigger difference is the adoption of TOF by Apple on its iPad Pro, causing speculation that TOF will be used on the upcoming iPhone 12 due out next month and that created demand , which was greater than expected by Sony. Samsung was forced into a potential supply shortfall for the Note line as Sony refocused on Apple’s demand. Samsung does not usually face being a 2nd place customer, but Apple has a tendency to pay a premium to its high specification suppliers and Samsung tends to squeeze its suppliers.  Perhaps in this case the Samsung philosophy did not sit well with Sony. Samsung filed a trademark known as ISOCELL Vizion, categorized as “Time-of-flight (TOF) optical sensors for smartphones, mobile telephones, tablet computers, consumer electronics and automobiles; facial recognition system comprising Time-of-flight (TOF) optical sensors, digital graphic scanners…”, indicating that Samsung, which uses the ISOCELL brand name for camera sensors will release its own TOF sensor. 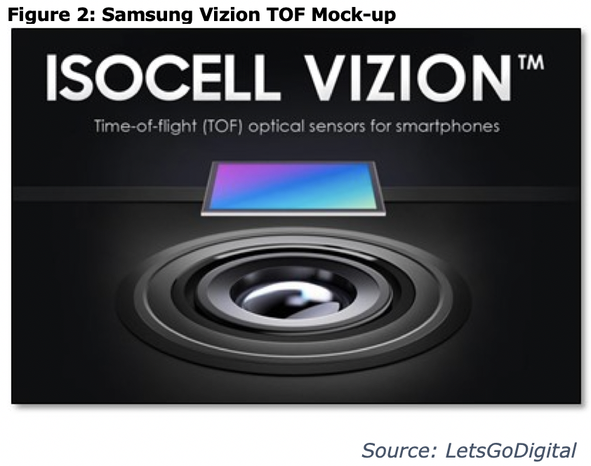