Samsung’s Unpacked 2000 redo  announced a number of new products featuring the Galaxy A42 5G as an affordable 5G-enabled smartphone in the Galaxy A series. Succeeding the Galaxy A41 that launched in May this year, the A42 5G will feature a 6.6-inch OLED display with a waterdrop notch. The phone will have a quad-camera setup on the back; however, the company didn’t reveal much about the exact hardware. Consequently, details about the SoC, battery size, charging speed, software, etc. also remain under the wraps for now. Samsung says the Galaxy A42 5G will be made official later this year, but it didn’t share an exact timeline.

The new Galaxy Tab A7 is the latest affordable offering in Samsung’s tablet portfolio. The leaked renders of the tablet jus surfaced, In terms of specification, the Samsung Galaxy Tab A7 offers fairly modest internals. On the front, you have a 10.4-inch LCD display with 2000 x 1200 resolution, an unspecified octa-core processor on the inside, 3GB of RAM with either 32GB or 64GB flash storage, an 8MP rear and 5MP front cameras, and a 7,040 mAh battery running the show. The tablet also packs four Dolby Atmos speakers, a 3.5mm audio jack, and a USB Type-C port. You can view the rest of the specs here. Details about the pricing and availability remain unknown for now. 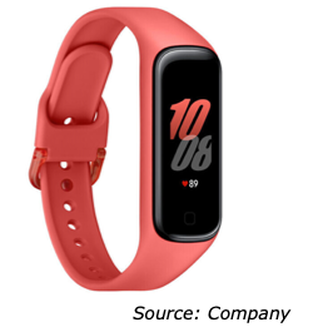 ​The Galaxy Fit 2 is a brand new entry in Samsung’s fitness tracker portfolio and is a successor to the last year’s Galaxy Fit with many improvement and a sleeker body, improved battery life, and an increased set of fitness features. The Galaxy Fit 2 sports a 1.1-inch color OLED display and has a virtual button at the bottom. The band has up to 70 different watch faces to choose from and features a larger 159 mAh battery, which lasts up to 15 days, according to Samsung. Just like other fitness trackers, the Galaxy Fit 2 can also measure your heart rate, your sleep quality, track footsteps, and count calories burned. Samsung hasn’t yet revealed any details about the pricing and availability of the Galaxy Fit 2.

The Galaxy Z Fold 2 solves almost every issue (except for perhaps water resistance) that reviewers/consumers had with the original Fold. The outside “cover screen” is much larger; the inside screen got rid of the unsightly notch, and the hinge is s more sturdy. There are also improvements in multitasking, closer partnerships with Google and Microsoft to optimize the experience, and further enhancements to the whole experience. 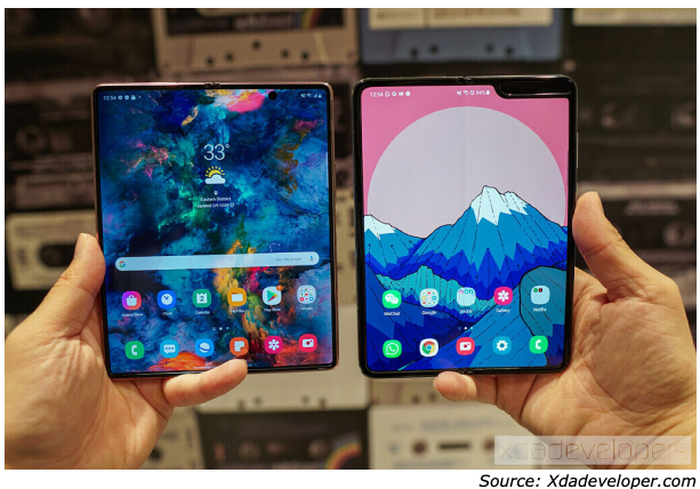 ​That most crucial change is the 6.2-inch cover screen, up from 4.5” because it feels much closer to a typical phone screen size, makes it easier to use, and reduces the need to unfold the device every time it’s used.  But the inside screen is a stunning 7.6” OLED panel with all the vivid colors and vibrant contrast expected from a Samsung flagship. The internal screen has 1768 x 2208 resolution and 120Hz refresh rate, while the external cover display features 816 x 2260 pixels resolution and 60Hz refresh rate. 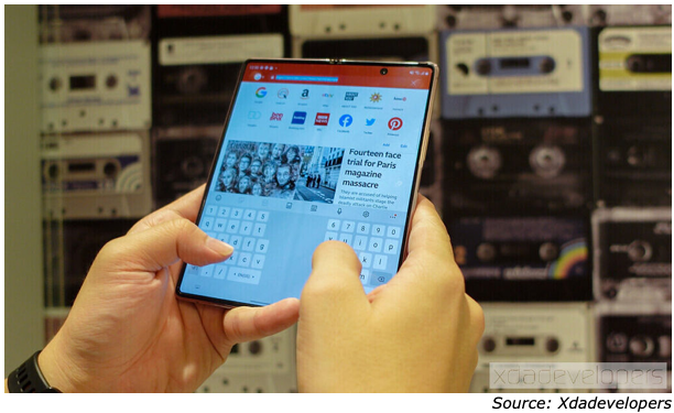 ​The same multitasking system from the first Fold returns, but everything feels more fluid and zippy. It runs up to three apps on the screen at once in split-view, and the orientation can be adjusted on the fly: for example, have two apps show vertically side-by-side or horizontally on top of each other. It supports drag and drop files and photos between native Samsung apps and Microsoft apps, for example, a photo from the gallery to Microsoft Outlook or Samsung’s messaging app. 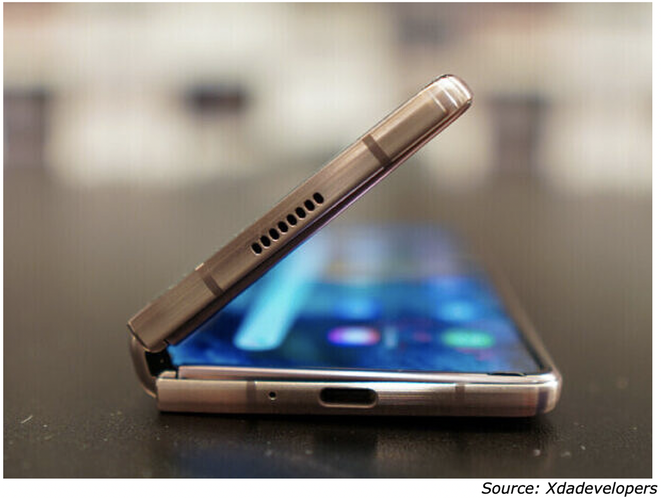 ​Another significant upgrade is the improved hinge, which, just like on the Z Flip, can keep a partially folded angle. Samsung calls this “Flex Mode,” and it brings several new use cases, such as hands-free video calls or photo taking. Unlike the first Galaxy Fold, the hinge is more refined and reliable, and the differences between the first and second generation Folds are immediately noticeable. 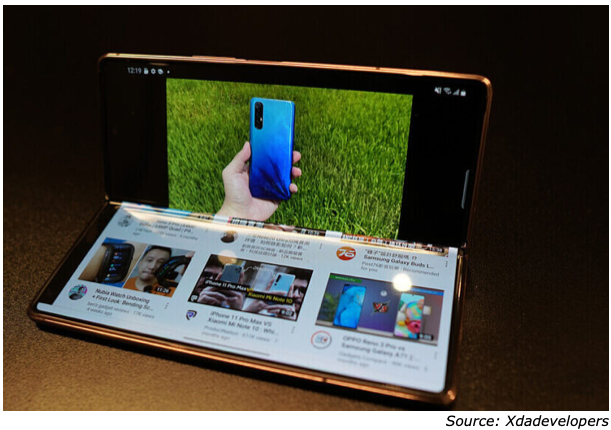 ​Samsung developed some new UI tricks to accommodate this new Flex Mode; certain apps will jump into a split view as soon as it’s partially folded. For example, in the YouTube app, a full-screen video appears when the device is opened all the way. But fold the device slightly, and the video jumps to the top half of the screen, with the bottom half showing video comments; other suggested videos, etc. While a marked improvement on the Galaxy Fold, it’s not 100% perfect as more apps need to be optimized to take full advantage of the real estate. For example, the Kindle app doesn’t allow you to display the pages in two individual columns split across the screen; instead, it’s full-screen only). Another takes selfies using the primary camera system, with the cover screen as a camera viewfinder. Borrowed from the Galaxy Z Flip, it’s an improvement to have, especially as the dual selfie camera on the inside has been replaced with a single pinhole camera. 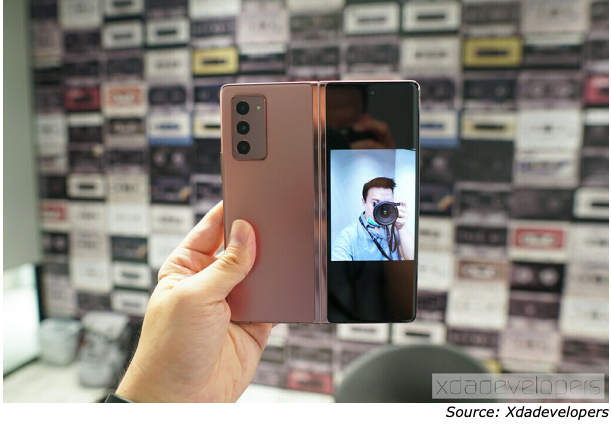 ​The main camera system consists of a trio of 12-megapixel sensors, offering the usual wide, ultrawide, telephoto focal lengths. The latter camera can only do 2X optical zoom as opposed to 3X and 5X of the Note 20 and Ultra, respectively.
Unlike last year when some regions got 5G, and others got 4G, this year, all devices support 5G. It has a  Snapdragon 865 Plus processor and there’s no Snapdragon-Exynos split like on previous Samsung smartphones. There’s 12GB of RAM and either 256GB or 512 of storage, which is half the base storage of the Galaxy Fold. 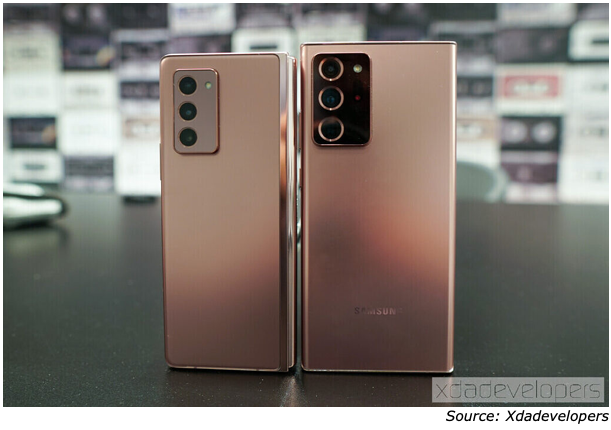 ​Samsung delivered the changes that were needed most. It’s one of the most expensive devices of the year, but at $1,999, it’s only $20 more than the original Galaxy Fold despite the vast number of improvements it brings.