Two years ago, Samsung bought Harman, a tier one supplier to the automotive industry, and now we see one of the first fruits of the merger, which combines Samsung Electronics technologies ranging from components to end-products with HARMAN’s know-how on automotive electronics The 2019 Digital Cockpit has a total of six displays delivering tailored infotainment to all passengers. For instance, passengers in the back seat will also be able to enjoy tailored content from their own screens. “All of the displays provide high resolution videos” said Wonhee Jo, hardware circuit designer. “Not only that, the back-seat screens can be folded conveniently into the seats when they are not in use.” 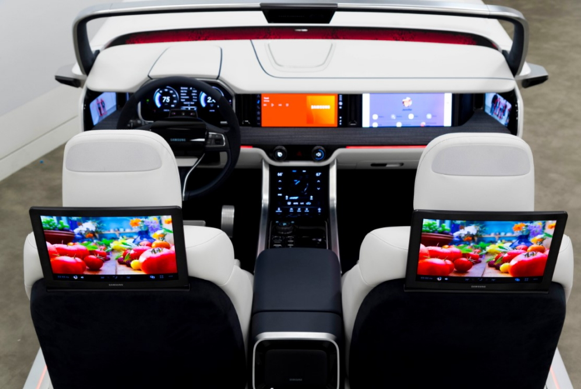 Source: Company
Safety features include identification of possible danger by scanning moving objects and preventing possible accidents if the driver dozes off while driving.When the driver’s hands are on the wheel to control, a voice command can be the best alternative for interacting with the car. Bixby, Samsung’s AI platform, has been integrated into the Digital Cockpit undergoing a transformation in order to fit into the vehicle environment. “We conducted voice command tuning and adjusted it to the vehicle environment by enhancing the icon and font size so that a driver can see them well while they are driving,” said Jonghee Choi, user interface developer. Nine Cameras Cover Every Direction, Ensuring Safety on the Road. In order to support safe driving, the Digital Cockpit 2019 is equipped with a total of nine cameras. To prevent driver loss of concentration, the Digital Cockpit 2019 provides additional alerts. “We’ve added a vibration alert by using the Samsung Galaxy Watch on your wrist,” said Oh. 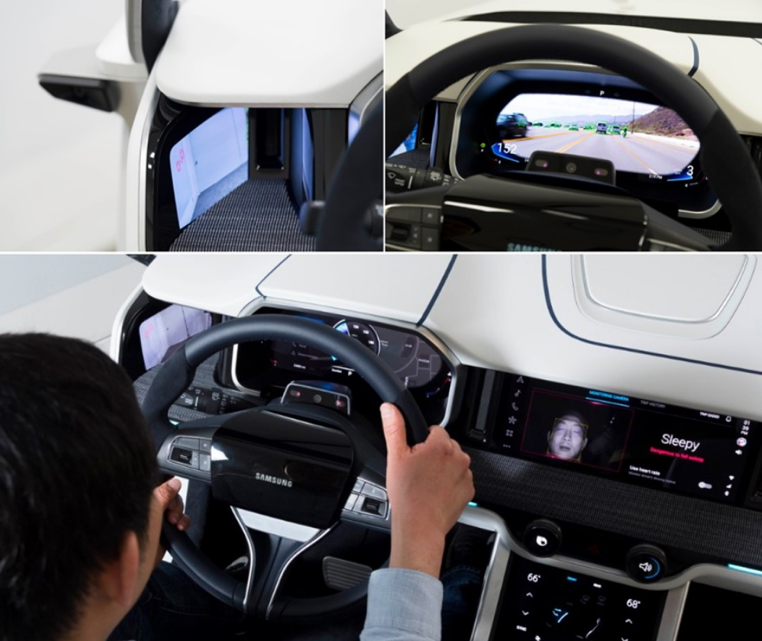 Source: Company
​The Digital Cockpit features a ‘Mirror Replacement Vision System (MRVS)’ that replaces side-view mirrors in conventional cars. The system consists of two displays on both sides and it helps safer driving by detecting moving objects in the rear when the driver checks behind them. By utilizing the camera technology, Digital Cockpit 2019 ensures safer driving with a wider viewing angle. The Digital Cockpit also monitors the driver’s condition through a system that tracks the driver’s pupils to detect drowsy eyes or careless driving. “The Driver Monitoring System is an essential technology for autonomous driving in the near future,” said Seungwon Oh, camera system developer.

A feature called ‘Home to Car’ is an example of the innovation featured in the Digital Cockpit. The function allows customers to control their cars at home through the SmartThings app. “One of the biggest advantages the connected vehicle offers is that there are no spatial constraints,” said Junhong Kim, software developer. “You can start the car, check the gas level and more, regardless of your distance from the vehicle. We are ready for the next generation of mobility.” The concept originally showed sparingly at CES 2018 was fully display at CES 2019 and has new features, such as starting the car and adjust the temperature via Galaxy Home. Once everyone gets in, the car uses face recognition technology to play tailored content for each passenger. It will even check what’s inside the home refrigerator via the car system, in order to prepare for the evening’s dinner.“If your destination is a soccer field, the car transforms itself into the soccer field by playing soccer game content while you are on the go,” said JH Yun, digital circuit designer from the Samsung Digital Cockpit Lab.

Since the screens recognize a face wherever and suggest content based on the preferences of pre-registered passengers the in-vehicle experience operates seamlessly for each seat,” said Seungwoo Shin, user experience designer. “Each passenger can enjoy different content, or they can just sync all of the screens to enjoy the same content, as if they were watching it from the living room of their homes.” “The experience of each passenger can be managed for each seat,” said Daesoo Choi, human interface developer. “The passengers can make detailed adjustments such as the height, angle and temperature of each seat or the screen’s brightness.”
Figure 3: Back Seat Screen Sync 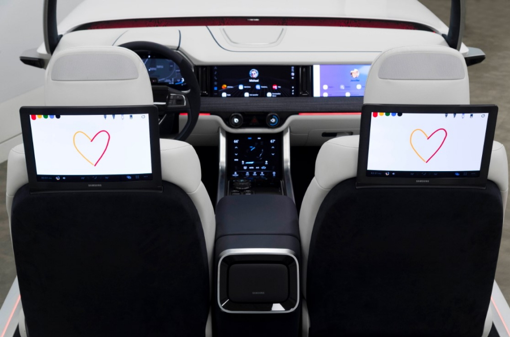 Source: Company
​One of the design challenges was the number of buttons. Not only were the least used buttons taking up space, they were also ineffective. So, the team solved the problem with a knob. “We got a hint from a knob on the Samsung Galaxy Watch when we were thinking about ways to fuse analog nostalgia with the digital world. And we solved the problem with a single knob that can serve as the functions of various buttons,” said JH Yun, digital circuit designer. “This year’s Digital Cockpit will also have knobs in the back seat that can be activated according to the user’s preference.”

Source: Company
The feature that allows drivers to adjust the temperature in the back seats was inspired by parents that look over to see their sleeping child from the driver’s seat. The feature that seamlessly presents documents from a smartphone on larger screens in the car via ‘Samsung DeX’ was an idea that came from another observation. “My ideas came from paying close attention to other people when I was traveling with a friend or driving with other people,” said Wooseok Hwang, user experience designer.

“The Digital Cockpit is not the concept of a finished car. It is more about technologies that enables the car,” said Wonhee Jo, hardware circuit designer. “The purpose of the Digital Cockpit is to unleash the potential to the world that Samsung has in the automotive electronics industry”.  “There is no set direction. As industries evolve, perspectives on cars tend to change as well. Our work is to take one step ahead of such trends and stay committed to integrate both Samsung and HARMAN’s infrastructure and technologies to keep the engine running to lead the ever-changing industry.” From: Samsung Newsroom, OLED-A
​