Vertical Divider
The price is expected to be $1,980. The chipset, GPU, and CPU for the Fold are Qualcomm’sand the battery (actually two so it can fold) is Lithium Polymer, which uses an electrolyte gel rather than a liquid as in Li-ion batteries that are typically used for mobile devices.

Despite the Galaxy Fold's 68 official images,Samsung went to painstaking lengths to avoid talking about the issues facing all folding phones: the fold gap and the phone’s thickness. One image (below) looks like the hinge creates an extra gap on one side of the phone. The gap appears to be a hair wider than the two "phone" parts are thick -- perhaps it's about 10mm -- which might not sound a lot, but it makes the Fold an even stranger device than it first appears. It seems like the two phone parts sit at around an 85-degree angle from the hinge. That means the screen side is going to sit around 10 degrees away from "flat" when laid down on a surface, folded.

The use of 2 batteries causes the device when folded to be as thick as 2 displays put together, not allowing the designers to take advantage of the thinness of the display. Samsung did not provide physical spec, so the thickness was left undefined. Despite the design criticisms, the product is impressive, especially the Fold's hinge, which looks durable, attractive and is the best solution to this problem. Future devices will probably utilize a deeper hinge that can house the bend without creasing it or a display technology that can get close to a flat fold. ​
Figure 1: Galaxy Fold with Hinge Articulated 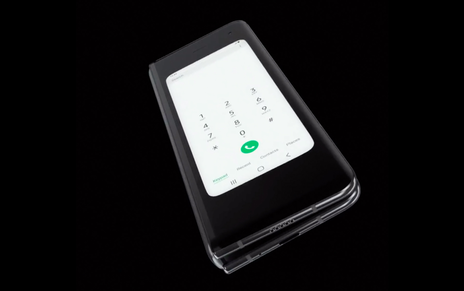 Source: Company
​The other criticism was the lack of Apps that have adapted to the new UI developed by Google, which is essentially how an application transfers between the smaller screen and the larger.  Samsung has developed a system (“Display Continuity”) that allows an application to move seamlessly from the folded display to the unfolded display without any user intervention, and has created a window-like system that allows the user to open up to three applications at once.  This is different from typical smartphones where multiple applications can be open, but only one on screen at a time.

The Fold divides the screen into a large segment (at least half of the display and two smaller segments, and each application that is open can be placed or moved to any of the three so a user can watch a movie, while answering a call and viewing a text message without having to hide or close any applications, but those applications had to be modified to comply with the multi-window and screen transfer system protocol.  Questions were raised about the user interface and user experience of foldable phones and last year, a report revealed that Samsung delayed the release of the Galaxy Fold because it wanted to nail the software, but there hasn't been much else since. The entire S10 line (excluding the Fold) have the ability to charge wirelessly, but can also charge other wireless devices, albeit one that will reduce the phone’s usable time in the field. A new feature to the Galaxy S family is the fingerprint sensor, which is placed under the display and uses ultrasonic sound waves to 3D map a fingerprint.  The S10e (less expensive variant) and the Fold use a side-mounted fingerprint sensor, which is the first Samsung smartphone using ultrasonic ID sensing. On the positive side, it should be faster to recognize a user and it can penetrate the display itself, which gives it the ability to be under the display and not influence the image, but it might be difficult to use with some screen protectors that add another layer over the display.  It could set a trend toward other brands using ultrasonic ID verification. The S10 series are the first phones in the world to support HDR10+, the third-most-popular high dynamic range format, and one championed primarily by Samsung itself. Standard HDR10 and Dolby Vision are more widely available, while HDR10+ is currently only available from Amazon Prime video, namely its original series. In my comparisons on TVs it's been tough to differentiate between the three in many cases.
On paper and based on Samsung's previous phone displays, the S10 could indeed be the best yet.
The 5G model will have two Time-of-Flight (TOF) sensors, one on the main cam and one on the selfie cam, which will give more depth detail by bouncing light (usually a laser pulse) off the subject and measuring the time it takes each pulse to be reflected.  While this provides significant depth data, it is not being used for identification, as is the case in Apple’s iPhone Face ID technology.   The Fold and the S10+ also have depth sensor as part of the Selfie camera system, but the technology behind these depth sensors was not specified.  The number of cameras, a highly competitive feature, ranges from three for the S10e to six for the 5G model if you count the TOFs as cameras. The OLED display sizes range from 5.8” (S10e) to 6.7” for the S10 5G, with the fold (open) being 7.3” or 4.6” when closed, now called “Infinity OLED” (also “Dynamic OLED” to indicate HDR10+ support) rather than “Super OLED”, which use a small laser-cut hole for the front-facing cameras, rather than a notch or bar that blocks the display.  The Screen-to-body ratio reaches 89.4% for the S10 5G, among the highest currently available.

The 128GB versions of the three main S10 variants run from $800 (S10e) to $1,000 (S10+).  Below is a summary of the significant metrics of the new S10 line.  The table is not all-inclusive, as many features, such as additional sensors or network protocols have been omitted to save space. 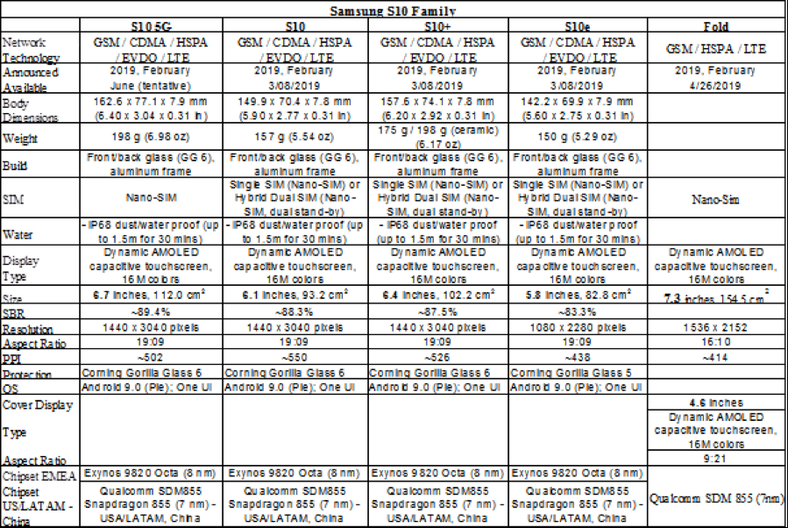 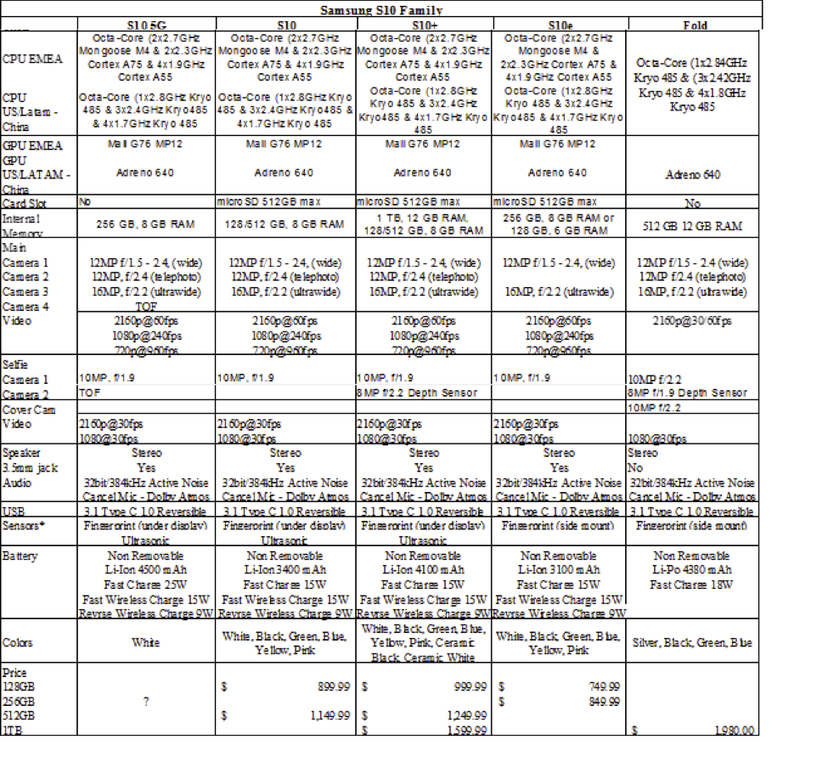 Source: SCMR, LLC, Company
​
​A few caveats regarding early use of 5G – except for a few cities, there will be a two to three year wait for use across the U.S., which is how long it took to get 4G to the majority of American cities, and by that point you'll want to upgrade the phone anyway. In Korea, the first 5G tests are under way, with consumer rollouts beginning in the next month, and in two- or three-years’ time, 5G won't be an optional extra; it'll be the default in most handsets worth buying. Buying the S10 5G right now is almost pointless. 5G isn't so much about adding more capability to the cellular network as correcting 4G's technical flaws -- issues like high latency and low bandwidth, which make the service progressively worse the more users there are in an area. OpenSignal claims that LTE download speeds can drop by up to 20 Mbps during periods of heavy demand. 5G's selling point is "the speeds you should have been getting all along!" 5G's benefits aren't for just noodling on their phones on a daily basis anyway. The capacity of the 5G network will be great enough that mobile companies can offer home broadband with fiber-like speeds. And it's hoped that since carriers won't need to run expensive wires to individual properties, it'll cut costs. And if companies aren't capable of getting self-driving cars to operate autonomously locally, 5G will be essential there. After all, if a vehicle needs to know when to stop to avoid a hazard and that information comes from a server, low latency and high speed is key. That's why the promise of one millisecond latency is attractive to automotive engineers, if speeds get to that point. Mobile handset manufacturer can a 5G handset, but there is no obligation to buy one. Samsung’s Drew Blackard even said that the 5G revolution "won't happen overnight," especially since the number of compatible devices is so small. AT&T's 5G rollout, for instance, is currently only compatible with select mobile hotspots -- and we previously have detailed the issues of the company's faux 5G either. By the time 5G is a practical reality, and available across the US, there will likely have been 1 or 2 iterations of the smartphone.