Vertical Divider
Samsung Mounts a Penta Camera on Galaxy A72

According The Elec, Samsung Electronics plans to mount a penta camera on the back of the Galaxy A72, a mid-priced smartphone scheduled to be released in the first half 2021. This is the first time that a penta camera has been applied among Samsung smartphones. The mid-range smartphone will feature five rear cameras, with a 64MP primary lens, a 12MP ultra wide-angle lens, an 8MP telephoto lens with 3x zoom, a 5MP “bokeh” lens, and a 5MP macro lens. The device will also reportedly feature a 32MP front-facing shooter. Last year, Samsung introduced the Galaxy A71, which featured a quad-camera arrangement. The successor will feature a nearly identical setup, with an added 8MP telephoto lens. Samsung was pleased with the Galaxy A71’s camera performance, enough that it’s ready to take the next step in its evolution by adding an additional lens to the sequel. Samsung has used its mid-range lineup to pilot new camera features in the past. As Android Authority points out, the Galaxy A80 featured a flip-up camera, while the Galaxy A7 and Galaxy A9 were the first from the company to introduce triple and quad-camera setups, respectively. 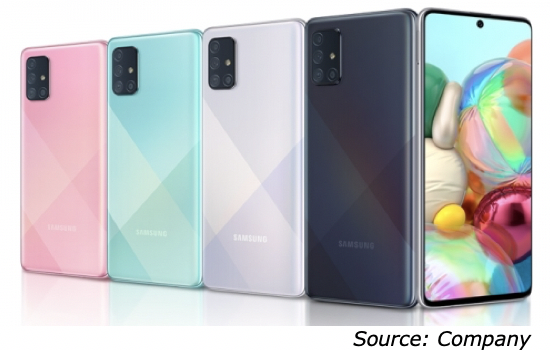