Samsung’s Mobile division President TM Roh confirmed that the company will announce five “power devices during the virtual presentation. The star of the show is the Galaxy Note 20 series, the latest generation of Samsung’s pen-toting flagship phone. It’s expected to have a 6.7-inch and 6.9-inch Plus/Ultra variants, jettisoning the curved edges of the Note 10 family as well as prominent camera bumps. These camera arrays include a 108MP main sensor on the Plus and Ultra, a 12MP ultra-wide sensor, and (at least on the Ultra) a 13MP periscope cam for long-range shots. Also prominent will be some Galaxy S20 range, features including the Snapdragon 865 chip, 12GB or more of RAM, and an in-display fingerprint reader.  There will also be larger batteries (4,300mAh for the base model) and a minimum 256GB of built-in storage. Samsung’s plans beyond the Note lineup could be more exciting. The company has already teased the Galaxy Z Fold 2, for the event. It’s a subtle evolution of the original with a much larger 6.2-inch external display, a 120Hz 7.7-inch internal display, and camera technology that may be shared with the Note 20.

Also part of the announcement will be the Galaxy Buds Live, the next generation of Samsung’s wireless earbuds with a “bean” design, active noise cancelation and built-in fitness tracking. The Galaxy Watch 3, will update Samsung’s top-end smartwatch with a slightly smaller case than the original watch (with comparable displays) and features borrowed from the Watch Active 2 plus blood pressure monitoring and ECG functions in addition to GPS and heart rate features.

According to Etnews,  the Galaxy Fold 2‘s store price is pegged at $1,990, ~$10 more than the Galaxy Fold‘s US price. Samsung was rumored to drop the Galaxy Note 20 price by ~$40 in South Korea as a response to falling demand amid the coronavirus pandemic, but the allure of foldable devices may stave a similar price decrease. Sales projections suggest that Samsung’s expecting higher demand for foldables. The Galaxy Fold 2 could sell six-times more devices annually than its predecessor. The original Fold sold just under 500,000 units in its first year despite its rocky lead up to launch. Etnews reports that Samsung won’t bundle a pair of Galaxy Buds Plus with the bendy phone. The first Fold was sold with a pair of Galaxy Buds, worth ~$108. Buyers will still be getting a charger with the device. The Galaxy Z Flip 5G will reportedly arrive at $1,370, the same price as the original LTE model. An “economic version” of the Galaxy Fold could launch before the end of the year. The Galaxy Fold’s Cover display might not be its main attraction, but it is the component that actually makes the device usable as a phone. Unfortunately, it had even fewer capabilities than a regular smartphone screen, something that was actually hobbled by software rather than any hardware limitation. Fortunately, that might be changing with the Galaxy Z Fold 2. XDA’s Max Weinbach discovered traces of new features in the Galaxy Z Flip’s firmware that hints that the cover display will function as a viewfinder for the rear camera even when the device is unfolded, in which case the larger main display is turned off, which makes it easier to use the more powerful main camera for taking selfies. 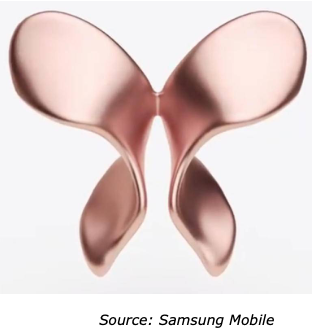