Samsung had little or no reference point for pricing MiniLED TVs at the time of their release only Chinese brand TCL, a notorious low baller, had a MiniLED TV on the market and those sets had limited availability on a global basis.  As a result, Samsung has been ‘adjusting’ the prices on its MiniLED/QD TVs and even their LED QD TVs frequently since the March release often, some in reaction to the recent release of its own Mini-LED/QD TVs by rival LG Electronics, which has less on the line. Samsung is searching to find a price point somewhere between QLED TVs and OLED TVs. The data suggests that Samsung hit the lowest aggregate price point for their Mini-LED/QD line between June 2 and June 25 and has been maintaining or raising prices on the majority of sets ever since.  Of the 15 models in the Mini-LED/QD TV line, only two models remain at their original prices, with the remaining 13 models are still lower than their initial prices, despite the recent set price increases.  The average price decline from initial prices for the Mini-LED/QD models is now 10.0%, with the range from 0% to -19.2%.  Among Samsung’s ‘plain’ quantum dot TVs, meaning those with QDs but no Mini-LEDs,  only one of the 18 models in that category has a higher price than at release, while 11 have seen no change.  The average decline is 3.9% for this category.  The table below shows the current status of the new lines and indicates both recent changes and changes from original pricing. 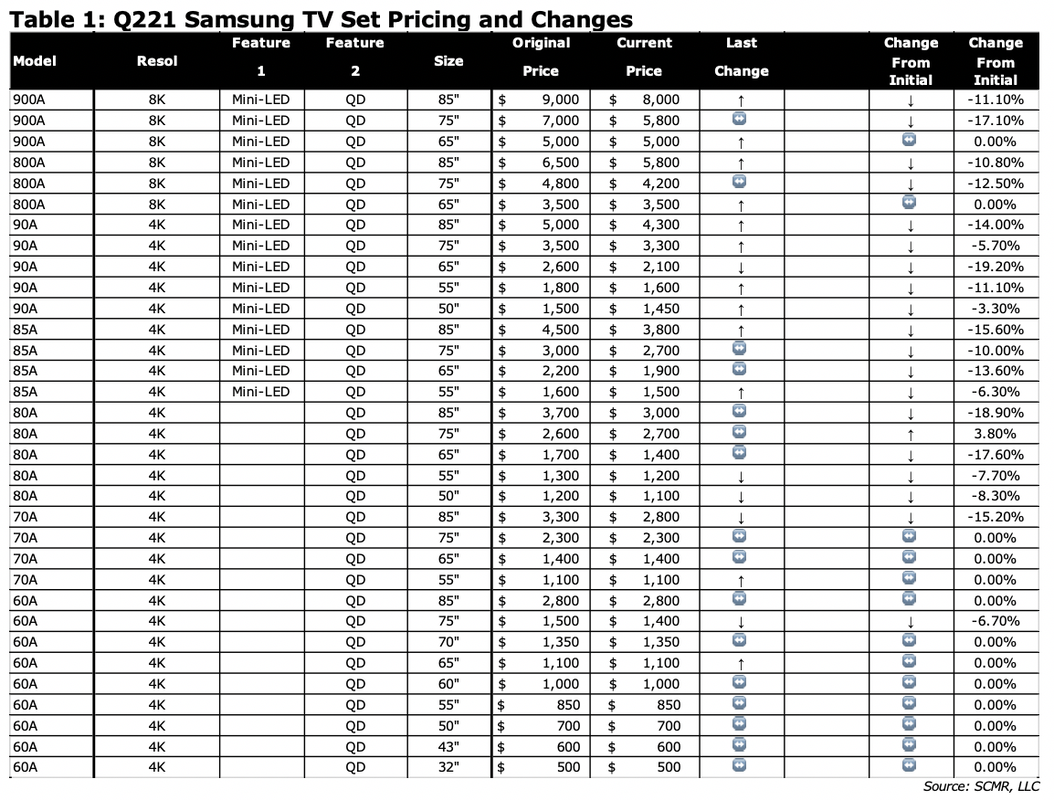 Personal computer shipments in China saw a mild year-on-year drop in the second quarter of 2021, according to an industry report.
Total PC shipments in the country reached 19.4 million units in the April-June period, down 3 percent year-on-year, data by technology market-research firm Canalys shows.

However, the shipment of PCs was 13 percent higher quarter on quarter, considering the weak shipment in the first quarter, read the report. Desktop and mobile workstation shipments went up 77 percent year-on-year, with 270,000 units shipped in the second quarter. Standard desktop shipments recovered, hitting 5 million units during the period, while notebook shipments edged up 1.4 percent year-on-year to reach 8.6 million units. Tablets, bucking the trend, plummeted by 24 percent in the second quarter from a year ago, data from the report shows.

Chinese mainland remains one of the few markets where desktop demand remains high, and the category continues to see positive year-on-year growth, Xu added. Global PC giant Lenovo was the top vendor by shipments in the second quarter. It has shipped 5.6 million units of PCs during the period, up 31 percent year-on-year. Dell followed with its shipments growing 32 percent year-on-year to reach 1.9 million units during the period, the Canalys data showed.