The Fold 3 is the only pocketable phone that converts into a tablet available outside of China. The original Fold was fragile and unaffordable for most. Samsung addressed the fragility with the Z Fold 2, but not the cost. This year the Galaxy Z Fold 3 Samsung made strides in both areas with SDC’s more robust folding screen and a lower entry price. The Galaxy Z Fold 3 is the standard for what a folding phone can and should do, leaving rivals far behind. Huawei is the only real challenger, though its folding phones are strictly limited in availability giving Samsung a lock on the market.

The Galaxy Z Fold 3 is one of the most expensive smartphones in the market. Samsung is shipping the phone with the minimum in the way of in-box goodies. There’s no charger, no headphones, and no case, just a USB-C cable, and a SIM ejector tool ala Apple). The S Pen is sold separately. There are two options, the S Pen Fold ($49), which is only compatible with the Z Fold 3, or the S Pen Pro ($99), which is much bigger and adds Bluetooth and compatibility with many older Samsung phones and tablets. The smaller external display shares its dimensions and shape with the Z Fold 2, but it adds more pixels and boosts the refresh rate from 60Hz to 120Hz.  The Z Fold 3’s outer screen is Samsung’s typically saturated Samsung style that is bright, colorful, and easy to use outdoors under the sun.  The boosted 120Hz refresh rate does make a difference. Thanks to the outer screen’s narrow shape, it’s a natural place process an inbox or scroll through Twitter or other social feeds. The 120Hz rating, which dynamically adjusts depending on the task at hand, improves the smoothness of scrolling in a big way.

The Z Fold 3 under-panel camera (UPC) design, which puts pixels from the display cover and mostly obscure the inner panel selfie camera lens. The camera can be seen with the naked eye, but the pixels contribute to a more edge-to-edge seamless screen experience. The uninterrupted look of the Z Fold 3 screen is an improvement over other OEM solutions. The crease in the middle of the screen is still there. It’s not as obvious to the eye or the finger as it was on previous Fold devices, but it clearly exists. It disappears from time to time depending on the display content but by and large, it’s there. 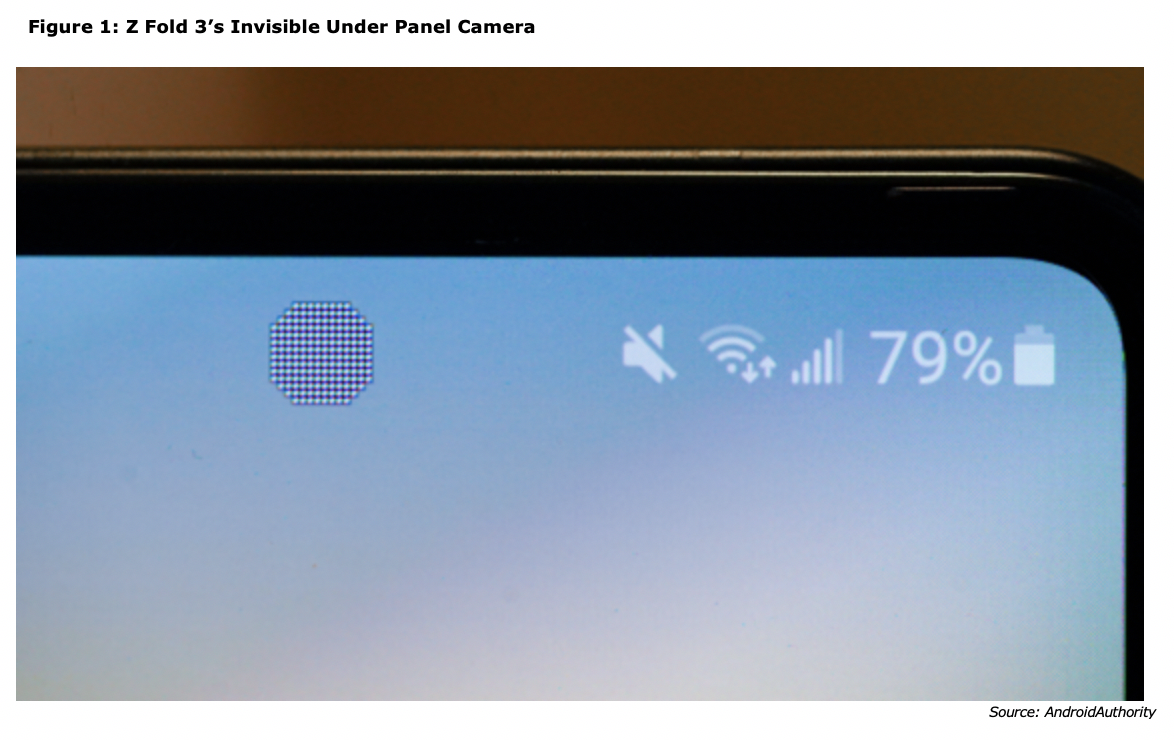 ​Samsung nipped and tucked the design to boost the Z Fold 3’s appeal when compared to its predecessors.

These changes are more robust and more comfortable in the hand. The device is also fractionally thinner and lighter. The squarish shape is awkward to use when open because it’s hard to grip one-handed, although owners will likely get used to over time. The hinge is covered by a thick aluminum spine that runs the entire length of the phone. All the mechanics are hidden within, leaving the end-user with a seamless experience when opening and closing the device. The action of the hinge is smooth and fluid, and it holds the Z Fold 3 at any angle so the phone can be used in a multitude of ways and the spine disappears when the phone is opened.

The foldable screen is the most advanced tech available to consumers with a new outer protective layer that Samsung claims is 80% stronger than that of the Z Fold 2. The resolution is the same as last year’s phone, which means a better-than-full-HD experience that’s excellent but not mindboggling. The 374ppi is below the 525ppi number seen on some standard flagships. Contrast, color, and brightness are all top-notch, especially considering that this screen bends in half. Full HD content from Netflix and other video purveyors looks excellent, though the odd aspect ratio of the panel produces thicker black bars above and below the content. The improved screen protector is less flimsy to help ready the screen for S Pen stylus support. Samsung also minimized the gaps at the top and bottom of the display where it covers the hinge. The fit and finish of the panel as it moves within the chassis are second to none.  But the battery when compared to the Z Fold 2, is  smaller by 100mAh.

The Samsung Galaxy Z Fold 3 has five cameras with an array that is smoother, smaller and rounder three-lens strip.


Samsung carried over the main three cameras from last year’s phone, The Fold series hasn’t traditionally served as Samsung’s top imaging device, while defunct Note series always stood for top-class imaging. With the Galaxy Z Fold 3 effectively standing in for the Note series, its carry-over camera configuration is a disappointment. The Galaxy Note is dead. Samsung may bring the much-coveted Note line back in 2022, but for now, the Galaxy Note has been all but replaced by the Galaxy Z Fold 3.

The controls and functional elements that are built into the edges around the frame are identical to last year’s phone. The fingerprint reader is quick and accurate once trained and the dedicated biometrics well. The Galaxy Z Fold 3's most significant improvement is an IPX8 rating for protection against water. An IP rating is twofold:
The IPX8 rating means the Z Fold 3 can sit in up to 1.5m of fresh water for up to 30 minutes without a problem.  The S Pens have a special retracting point that is meant to protect the Z Fold 3’s folding display from damage. 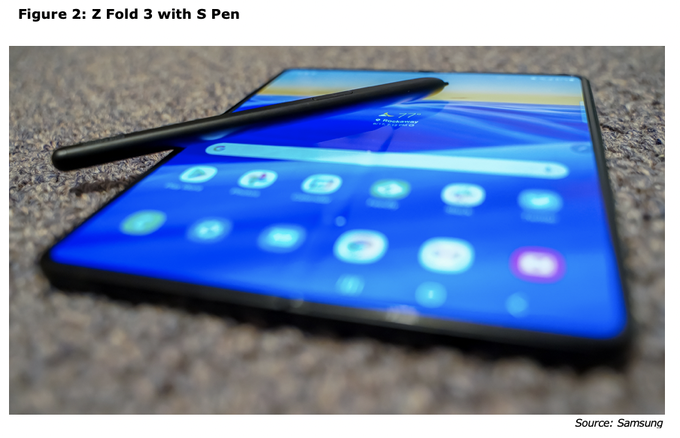