Vertical Divider
Samsung Galaxy A01 Released on the “Quiet”
December 22, 2019
​
Samsung’s A-series has traditionally been for mid-range to low-end phones with some features that make them stand out from other “cheap” devices. Recently, Samsung quietly announced another A-series device: the Galaxy A01. The Galaxy A01 features a 5.7-inch rigid OLED 720p display with a waterdrop “Infinity-V” notch. The notch houses the 5MP front-facing camera, with two on the back: a 13MP main camera and a 2MP depth sensor. Inside the Galaxy A01 is an octa-core Quad 1.95 GHz + Quad 1.45GHz processor with 6/8GB of RAM and 128GB of storage. That’s a really nice amount of storage for a low-end phone, plus it’s expandable with a microSD card. The battery is 3,000 mAh and it does not seem to have a fingerprint scanner. Samsung did not share pricing or release date information, 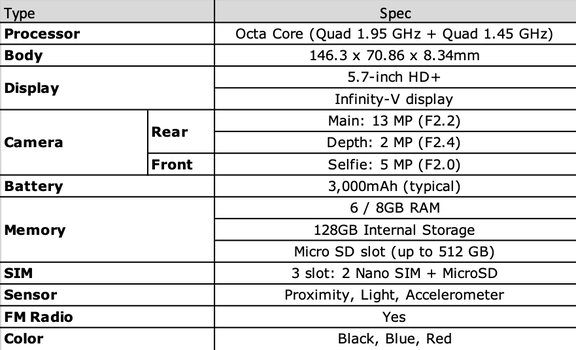 Source: xdadevelopers
​
Samsung Galaxy Note 10 Lite renders show familiar camera design and S Pen. With the Galaxy S11 series on the horizon, there are a couple of other interesting Samsung devices showing up. The Samsung Galaxy S10 Lite (or Galaxy A91) was confirmed by an FCC listing. There was also a rumor about a Galaxy Note 10 Lite back in October, and now there’s a first look at that device. Similar to the Galaxy S10 Lite/A91, this device is also going by two names now. @OnLeaks has shared renders of a device that could be called the Galaxy A81 or Galaxy Note 10 Lite. There are only two renders of the device and not a lot of details are visible. 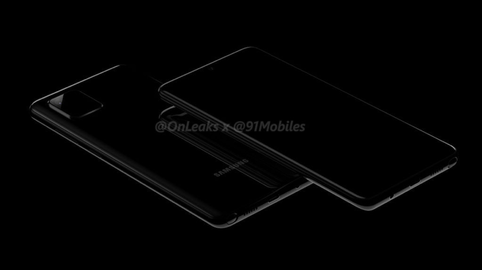 Source: @OnLeaks
The camera arrangement looks to the Galaxy S11 series and the Galaxy S10 Lite. According to rumors from Ishan Agarwal, the square housing will contain 3 cameras and a flash, though there’s no word on MP sizes. Speaking of cameras, it seems to have a single centered hole-punch camera on the front. The second important feature is the S Pen. There is a 3.5mm headphone jack, speaker grill, and the S Pen docked in the bottom edge. It will be useful for drawing on the 6.5-6.7-inch mostly flat display. There may also be a fingerprint sensor underneath the display.
There aren’t many other specifications to go on right now. Some rumors claim it will be powered by 2018’s Exynos 9810, which was in the Galaxy Note 9 series. That would be a definite step down from the flagship Galaxy Note 10 and reason for the “Lite” name tag. It may also launch with 6GB of RAM and Android 10.

Counterpoint reported that overall global handset profits declined 11% Y/Y to $12b in Q3 2019 due to an increased mix of entry to mid-tier products and a fall in revenues for key smartphone OEMs. Samsung and Huawei managed to increase their revenue on an annual basis. Additionally, as previously reported, the replacement cycle for premium smartphones has lengthened. Apple dominated global handset profits with a 66% share, despite falling smartphone volume. Samsung, the volume leader was a distant # 2 at 17%. The loyal premium user base in the major markets like the USA, EU and Japan is one of the reasons that Apple can still operate at a profit level that its competitors can only wish for. Now with a strong service strategy, Apple’s overall ecosystem is strong enough to guarantee it a steady inflow of revenue in the coming years. In the immediate future, we believe that Apple’s profit for the holiday season will increase with the new line up of iPhones gaining good traction. 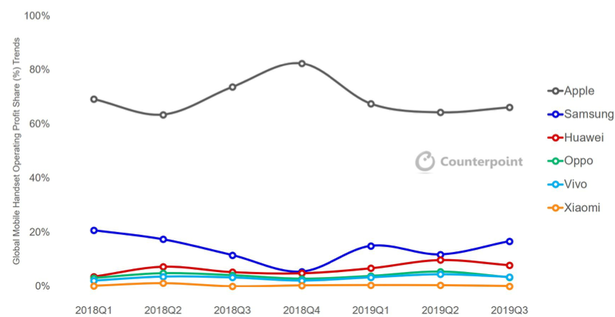 Source: Counterpoint ​
Chinese smartphone brands operate at low-profit margins, but better than in previous years, even though they are expanding outside China and also penetrating high-tier price bands. Chinese brands offer attractive propositions to mature smartphone users with new feature-packed flagships at affordable prices. Some of these Chinese brands are also now looking at monetizing their userbase by launching services like financial services, IoT products and others. However, it is becoming a challenge for Chinese brands to increase their smartphone ASPs and margins due to a combination of longer consumer holding periods and Apple lowering pricing on some key SKUs, which has limited the headroom that Chinese vendors had used to increase their ASPs. In coming quarters, the adoption of 5G will drive some upgrades. This will likely lead to revenue growth for OEMs which are already preparing themselves ahead of full 5G commercialization. For example in China- Huawei, OPPO, vivo and Xiaomi will gain from aggressive 5G push and use this opportunity to increase their ASP.