Samsung Electronics and LG Electronics are employing different TV launch strategies for the second half of 2020, in which they are expected to release ultra-high-priced TV products worth hundreds of millions of won. The two Korean TV giants have been waging a TV war since 2019. Samsung Electronics, the global No. 1 TV producer, is considering releasing a home micro LED TV to the market this September as planned. Despite the COVID-19 pandemic, Samsung Electronics is determined to go ahead with its sales strategy premium products without any changes.
The company plans to launch 90- to 100-inch micro LED TV models which are suitable for home installation. Earlier, Han Jong-hee, president of Samsung Electronics' video display division, announced at CES in January that Samsung Electronics will release micro LED products ranging from the 75-, 88-, 93- and 110-inch household models to 150- and 292-inch models in the second half of 2020.
Micro LED TV models are loaded with next-generation displays that do not have limitations in terms of bezel, size, aspect ratio, and resolution. They offer a high image quality of 8K or higher. A 148-inch micro LED TV retails for 400 million won to 500 million won. LG Electronics is more cautious about launching the industry’s first rollable OLED TV, which it developed in 2018. It initially planned to launch the new model in the third quarter of this year. Yet in light of the collapse of the distribution channels due to the spread of COVID-19, the company is considering delaying the launch of the model after the fourth quarter of 2020.

Samsung Display Co. and LG Display Co. are exiting the  LCD business to concentrate fully on OLED or QD-OLED displays to maintain a technology lead over Chinese rivals. Samsung Display will phase out its LCD production by the end of 2021 to back proprietary QD 1.0 (QD-OLED) technology as its mainstay TV panel. 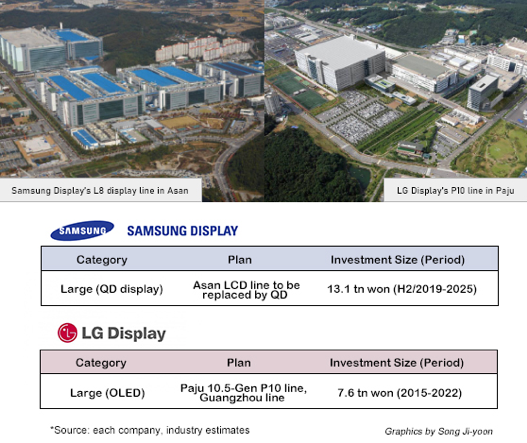 Source: Companies
In October last year, the company unveiled a plan to invest total 13.1 trillion won ($10.7 billion) on QD-OLED display plants and R&D projects through 2025.  The company currently is converting its existing LCD lines to make large-sized QD-OLED displays. Its first QD-OLED plant in Asan, south of Seoul, is scheduled to start operation in the first half of next year to produce 30,000 sheets of 8.5-generation display panel per month for 65-inch screens.

Source: Pulsenews
LG Display will stop producing LCD panels for TVs in Korea by the end of 2020. The lines will turn out smaller LCD panels for automobiles, monitors and laptops. The company expects to generate more than 50 percent of its revenue from OLED business from next year, when the OLED plant in Guangzhou, China becomes fully operational. The company recently carried out massive restructuring including layoffs for its LCD business. Also, its management reportedly is negotiating with labor union on changing work hours to cut production costs. The migration has gained speed after Chinese display panel makers began to jump in the OLED market. China Star Optoelectronics Technology, subsidiary of Chinese electronics maker TCL Technology, is building a factory to produce large-sized OLED panels for TVs. HKC is also expected to make large-sized OLED panels with a target to start mass production next year. From: Pulsenews