The Galaxy S21 models that launched in early 2021 will not be followed by a corresponding Note series. The current chip shortage served as a convenient pretext to canceling the Note refresh this year. The only remaining signature feature of the Note series is also fading away, as Samsung started adding S Pen support to other phones, including the Galaxy S21 Ultra. Foldable phones like the Fold 3 and Flip 3 are the best option to replace the Note, with particular emphasis on the former. The Fold phones offer buyers a tablet-like foldable screen, and the Fold 3 is getting its own stylus. Samsung is expected to unveil the new foldables in early August and start selling them a few weeks later. Leaker Jon Prosser claims Samsung, claiming that the two handsets might be unveiled during an August 3rd launch event that Samsung has not yet announced.

Prosser is back with a new FrontPageTech report that says Samsung  started manufacturing the new Fold and Flip handsets a few days ago. The leaker claims that Samsung has ordered production to reach 50,000 to 70,000 units a day for each device. With under 50 days remaining until that rumored August 3rd event, Samsung might have up to 3.5 million Fold 3 units ready by the time the phone is released, and the same number of Flip 3 units. What’s different this year is that Samsung wants to significantly ramp up sales of foldable devices, which haven’t sold in large numbers in the past.

Last year, Samsung mass-produced a combined 2.5m units of Fold 2 and Flip handsets. A few days ago, Samsung’s US online store advised users that the Fold is out of stock. Samsung set a sales goal of 7m for the Fold 3 and Flip 3 handsets this year. The Fold 3 might cost around $1,500 instead of $2,000, while the Flip 3 could start at approximately $1,000 rather than $1,400.

Samsung has tested various programs to make its foldable phones more affordable this year, like increasing the trial period and launching phone subscription plans. Samsung is also expected to throw free credit or accessories into the mix for buyers who preorder the foldable phones ahead of release.

Huawei’s newest folding phone, the Mate X2 is sold officially only in mainland China at a retail price of 17,999 yuan ($2,78, more than three times the average salary of a young college-educated adult in China. But the Mate X2 is in short supply thanks to the chip crunch imposed by the U.S. government on Huawei. As a result, the phone’s price has been jacked up by scalpers and resellers to closer to an equivalent of $3,500. But the phone represents the very best in foldable hardware.
​Huawei’s Mate X2 folds completely flat with no gap. Xiaomi’s and Samsung’s phones, do not fold all the way closed, leaving a bit of space between. Samsung’s Galaxy Z Fold 2 hinge feels sturdiest of the three, and it can stay in place mid-fold (which allows it to serve as its own tripod), while Huawei’s and Xiaomi’s cannot.
​Finally, the third major upgrade Huawei brought to the foldable industry is it managed to cram a flagship level camera system into the phone, including a 10x Periscope zoom lens. The latter is relatively new technology that sees a camera module placed sideways inside the phone to allow light information to travel through a series of magnifying lenses before hitting the ISP (image signal processor), it’s a trick that allows the camera to pull off significantly sharper zoom photos than traditional cameras. 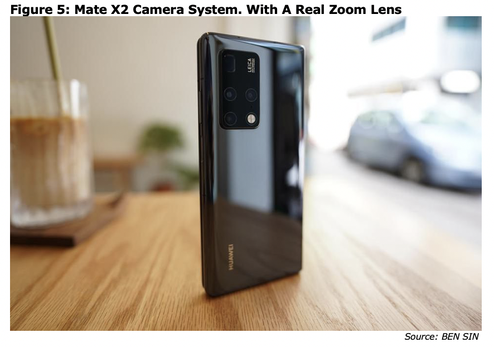 ​That Huawei managed to fit a thicker, complicated camera system into a device that folds in half is a flex in Huawei’s hardware prowess, because neither Samsung nor Xiaomi managed to pull it off—the Z Fold 2 and Mi Mix Fold have compromised camera systems that are a step below each company’s slab flagships. The 10x Periscope zoom lens works really well. Huawei was the pioneer of this technology back in 2019, and it’s keeping the lead here. The Mate X2 can capture almost lossless 10x zoom images, and even photos up to 30x look sharp enough for Instagram. Elsewhere, the main camera of the Mate X2 is the same 50-megapixel, large sensor camera with an RYYB array seen in the Huawei P40 Pro, and that phone’s camera was a step ahead of the competition at the time of release in 2020, and still holds up well today.