Samsung Electronics is planning to manufacture 311m Smartphones in 2020 up 3% Y/Y and about 60m will use Original Development Manufacturing (ODM), double the volume in 2019. Although 2020 Smartphone production volume in 2020 is similar t0 2019, the size of production of Smartphones by means of ODM in 2020 will be much higher than that of 2019. are also setting up their plans for 2020 according to Samsung Electronics’ plan. Approximately 500,000 Galaxy Fold smartphones have been sold since the model’s launch in September after delays lasting about five months due to display defects spotted by reviewers in April. Samsung plans to sell a total of 6 million foldable devices next year and 20 million by 2021, said the analyst.
LG Electronics is also expected to join the foldable market next year by announcing its first model.

Samsung is in a. position to exploit the European and Latin American markets no longer available to Huawei. To lower costs and better compete, Samsung will shift 60m units to joint development manufacturing (JDM), Wingtech, a current ODM for Huawei. Apple's current EMS providers are Foxconn, Pegatron, and Wistron); Foxconn and Wistron have factories in India. Huawei's smartphone production is 60% in-house and the rest is done by ODM and EMS providers such as Wingtech, Flextronics. Longcheer is believed to be an ODM provider for Xiaomi. Samsung's JDM models are expected to target the mid and low-end of the market, and the Vietnamese plant will be dedicated to the production of premium smartphones. If Huawei's smartphone exports fall by 50m units and should Samsung take more than 70% of the market, the impact of Samsung's JDM on Korean component makers could be smaller than expected.  Finding space for a large battery is difficult, just look at the Razr’s 2510mAh cell, which is supposed to power a 6.2-inch screen (when fully extended). As dazzling as a flip-phone is, upwards of $2000 for a device that needs to be charged twice a day is unrealistic.  If Samsung’s clam shell comes in under $1000 it will be a big problem for Motorola, which has enjoyed a mini comeback since the Razr was launched. It goes on sale at the end of December and will only have a two month lead on Samsung’s next launch in February.
Motorola isn’t standing still and has come up with a design that is striking in its contrast to the current Motorola Razr. Rather than keep everything centered around a folding screen that fits neatly in-pocket, Motorola is approaching the design direction of Razr with a focus on making the phone as useful to as many people as possible. Setting aside overall design, the phone isn't fundamentally different than the current Motorola Razr. It features a screen on the outside and another, flexible display, on the inside. But, when the device is folded, the apparent primary camera setup sits on its own modular partition at the top. The design includes front and back cameras as well as another on the top edge. The former two are fisheye style lenses, hinting at 360-degree photo taking. But that isn't part of the hinge. Motorola describes the component as modular, meaning that it can be swapped out for others as needed. When the device is opened up, the hinge folds out to reveal a tall aspect ratio display while the camera housing mod remains straight. That places it at a perpendicular angle to the now unfolded display panel. The housing can then serve as a stand to prop up the device or a grip while it's being used. The design modular Motorola Razr documentation also hints that those will be 12-megapixel sensors, likely 'quad pixel' sensors for better light and detail capture. An IR-based facial recognition sensor may be included as well, although these are still patents and not set in stone. 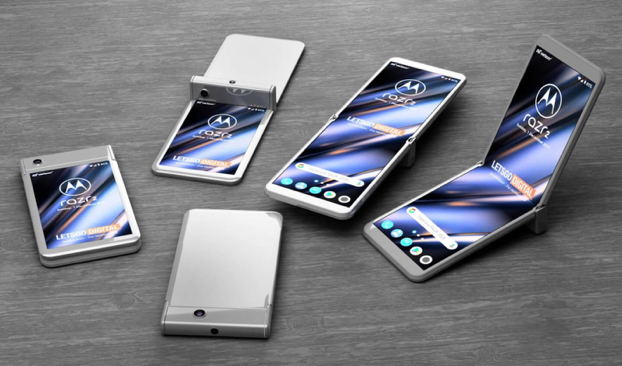 Source: LetsGoDigital
However, in terms of multitasking, horizontally folding smartphones are expected to be superior, and Samsung will likely unveil a new horizontally folding model in 2H20 with an enlarged external display. The Galaxy Fold provides the UX of both smartphones and tablets, and its display is expected to expand to more than 10 inches when unfolded, vs. the current 7.3 inches. Samsung will eventually fold the 10-inch model not just once but twice, through the development of folding technology. Meanwhile, out-folding models and twice-folding "Z-Fold" smartphones announced by Chinese OEMs have difficulty getting past the prototype stage. Huawei's Mate X reportedly sold out in China, but the quantity is still unknown. Xiaomi clam shell’s release date has not yet been set. Samsung will lead the foldable smartphone market by a wide margin for some time to come. 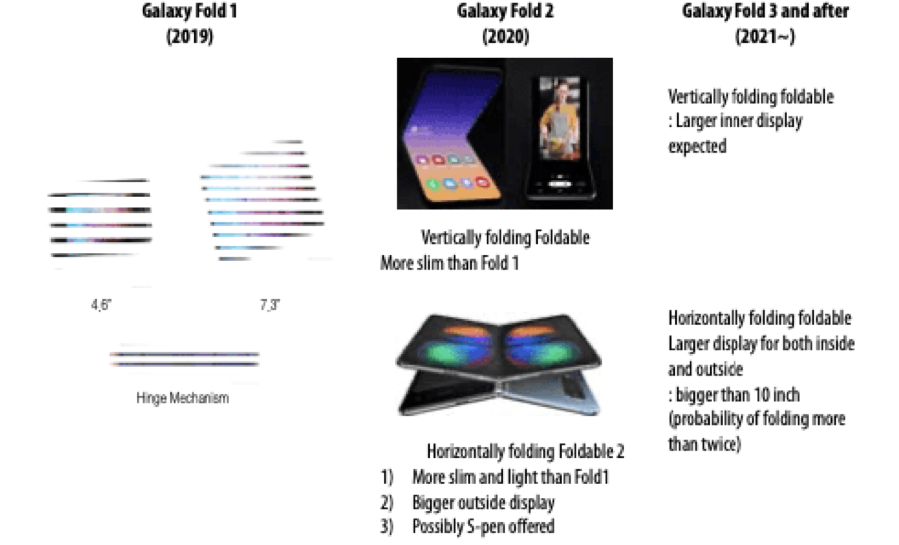