​Samsung, which has the largest share of smartphone shipments, has been losing share, since Q219 and continued in Q120 when Samsung shipped only 59.2m units, their lowest level since 2012. To rebuild share and to boost overall smartphone sales in 2020, Samsung is expected to release a new flagship smartphone in each month, starting in August.  First in line in August is the Galaxy Note 20 series, which is expected to have a number of variants including the Galaxy Note 20, with a display between 6.4” and 6.7”, the Note 20+, with a 6.9” display, the Galaxy Note 20 Ultra, with a screen over 7”, and the Galaxy Note 20+5G.  While specifics are still unconfirmed, at least one Note device is expected to have a 120Hz refresh rate, a feature demanded by gamers and will have a LTPO backplane.  Doubling the refresh rate drain the battery more quickly so the addition of LTPO (Low temperature poly oxide, which allows the display to only update sub-pixels that change, due to the low leakage current of the IGZO driver TFT.

In September Samsung is expected to release the Galaxy Fold 2 and could use UTG (ultra-thin glass) for the protective cover lens in the 7.7” display (the Fold has a 7.3” which should have better folding characteristics, along with a hinge system that has been redesigned to keep out contaminants. In October Samsung is expected to release the Galaxy S20 FE (fan edition). Samsung released its Note 10 in August of 2019 and followed up with the Note 10 Lite, a larger but slightly less capable version, which would have been the equivalent of a Note 10 fan edition, indicating to Samsung that these variants can increase volume.  The release of the S20 in March of this year has been disappointing, whether due to the device itself or the COVID-19 pandemic, so it would seem that Samsung is trying to bring back some S20 family momentum with the S20 FE before the refresh of the flagship Galaxy line in 1Q 2021.

Samsung is taking the offensive by increasing flagship variants to boost sagging smartphone sales with the personal backing of vice chairman Lee Jae-yong. Whether the variants are a zero-sum game or can generate incremental sales won’t be known until late 4Q, but credit them for taking the initiative to overcome the efforts of the Big 4 in China. Samsung has been consistent with its plan to push new technology down through its entire smartphone line, including mid and low priced models, which allows it to keep pace with smaller, innovative brands that can offer ‘almost as good’ devices at discounted prices.  The company can lead the industry as to OLED display technology and provide innovative features more quickly than others, but the question remains as to whether consumers are willing to pay for those features. 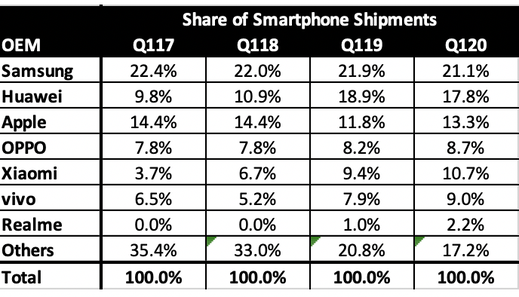 The Elec reported that Samsung Mobile lowered its mobile device and smartphone targets for this year and has been informing its supply chain of the reductions.  The mobile device shipment forecast for smartphones, feature phones, and tablets were reduced from 330m to 280m down 15.2% vs. Samsung’s original forecast and 18.4% Y/Y.  Individually, smartphones shipments were down 14.3% vs. the forecast and 17.2% Y/Y.