Samsung's 2020 line-up of TVs will be known as the 'T' range and the company is planning to launch new 4K models called Q95T, Q90T, Q80T, Q70T, and Q60T.
The top Q9xT will be more comparable to last year's Q80R. Samsung will be moving each model in its 2020 range one step up, reserving its most advanced LED zone-dimming for the new 8K TVs (Q800T and Q950T). The first 4K TV range for 2020 to be officially unveiled is the Q60T, which will replace last year's RU8 series as a mid-range 4K TV. It is also one of Samsung's first TVs with 'Dual LED'; "a system of dedicated warm and cool LED backlights enhance contrast details" as well as colors, the company said. This is not to be confused with zone dimming LED, which is reserved for the more expensive models. 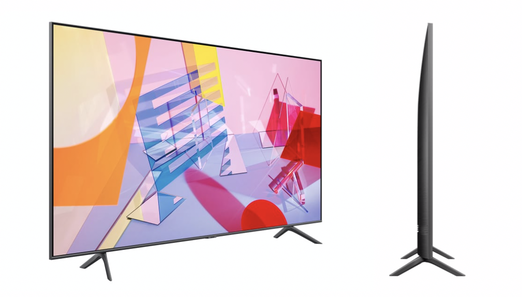 Source: Company
The design is similar to last year's models and the company's Tizen platform now has native support (an external device is no longer required) of Google Assistant and Amazon Alexa, in addition to Bixby. The latest version of Tizen also includes an expanded Picture-in-Picture mode. Samsung has no plans to provide update previous TVs with the latest version of Tizen. Samsung continues to ignore Dolby Atmos and Dolby Vision, but you will not get HDR pictures from the LCD panel in Q60T either way. With LCD TVs, HDR requires a least some form of zone dimming LED. Q60T will be available in up to 85 inches and be part of Samsung's "QLED" line-up to signal that it uses a quantum dot film behind the LCD panel to increase the color gamut. However, in practice only HDR content uses the expanded color gamut so there is little benefit over other mid-range LCD TVs without quantum dots. At CES, Samsung confirmed HDMI 2.1 only for its 8K TVs. The new audio features that Samsung announced at CES 2020 will not be supported in Q60T. 'Q Symphony' that allows you to use the TV speakers in combination with a connected soundbar will be available in Q80T and up, whereas 'Object Tracking Sound' (OTS) will be supported in the 8K models (Q800T and Q950T).