When unfolded, the FlexPai 2 is roughly the size of an iPad mini. The FlexPai 2 runs Royole’s WaterOS Android 10 skin. The FlexPai 2 is about the size of a passport when folded. It folds the opposite way to Samsung’s Galaxy Fold devices, where the main screen goes around the outside of the curve rather than the inside, so it remains exposed when the hinge is closed. It’s the same approach seen in the original Huawei’s Mate X folding phone. When folded, the FlexPai 2 is about the same size and shape as a passport, while the unfolded screen is comparable to an iPad mini.
​
The display is a 7.8-inch 1920 x 1440 4:3 panel which turns into a 5.5-inch 1440 x 900 16:10 panel or a 5.4-inch 1440 x 810 16.9 panel when folded, depending on which half you’re looking at. The reason it doesn’t fold evenly is because there’s a large bezel on one side of the screen that houses the phone’s quad cameras. Build quality is solid, although a slightly thicker plastic gasket on the opposite side of the screen to the cameras betrays the need for a little more durability protection than on your average smartphone. The phone feels great when unfolded, though, with a 6.8mm-thick slimline metal frame, and the hinge is smooth and torquey, without the awkward rubber concertina of the original FlexPai. One advantage of Royole’s new design over Samsung’s is that it can be folded tight without leaving a gap between the two halves of the screen. 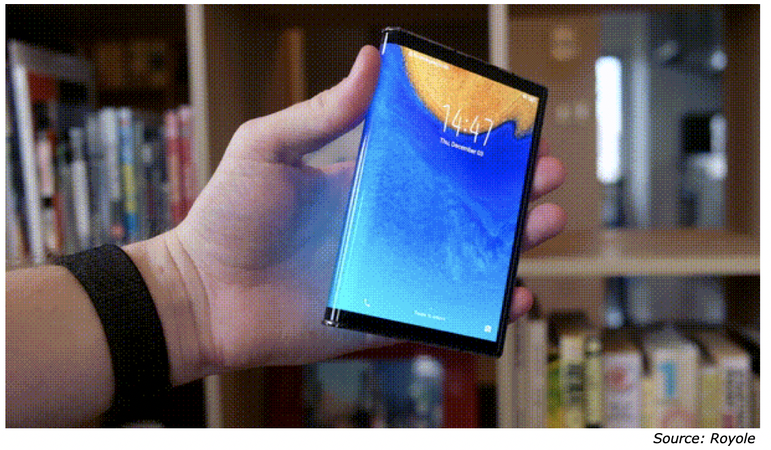 ​The OLED panel itself looks decent enough, with good contrast and brightness, but the pixel density is only 308 ppi,  because the screen has a larger bend radius than the Galaxy Fold’s, which folds at an acute angle on the inside, more of that crease is visible when the phone is unfolded. The crease is only really visible when light catches it the wrong way. But the hinge can be felt behind the screen whenever it’s swiped across the middle. Regarding the ULT-NSSP material used in the “Cicada Wing” display, a representative said it’s “composed of ~100 micro-nano materials.” They also said it’s “shatterproof and functional after close to two million folds.” The FlexPai 2 has high-end specs inside, with a Snapdragon 865 processor, up to 12GB of RAM, and a 4,450mAh battery. I found performance to be pretty good, with few of the software issues that plagued the original FlexPai whenever you wanted to switch up the orientation. At 9,998 yuan, or roughly $1,500, the FlexPai 2 is still not cheap. And Royole’s status as a newcomer to the mobile industry is another good reason to view the device with suspicion. Royole’s is trying to get its screen into phones from other companies; ZTE has been touted as an early partner.