​LG Display is having a material effect on the design of smart TVs. Those trusty rectangles that stream and display Netflix shows, Amazon movies, and PS4 games are entering a new stage in their evolution, and it has everything to do with their size. Long gone are the days when having a home television meant a boxy CRT with a 4:3 aspect ratio. Now we’ve come to expect super-slim flat screens to be flush against a wall, or massive 75-inch displays teetering on top of our media centers.
These new, larger form factors, though, are heralding a new design challenge for TV brands; namely, how to stop these ever-growing TV sizes from utterly dominating someone’s home. The new flagship size for televisions is 55 inches – with 65-inch TVs being the fastest-growing category beside that. Some, like the Samsung Q950TS 8K QLED, even come in an 82-inch size in the US  due to the abundance of large size rooms. Foldable smartphones, laptops and tablets are in process but TechRadar is looking for a foldable TV. Why? 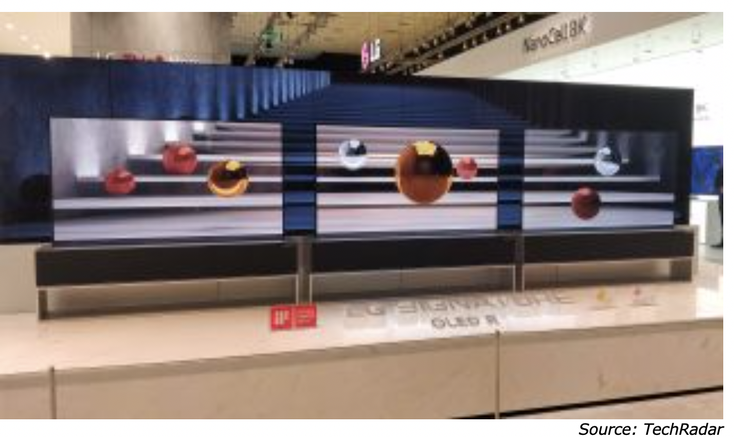 ​That’s a lot of screen space to pack into any living room, and seeing as the average home isn’t increasing in size along with the average television, the buck is falling to TV manufacturers to design innovate ways to better blend displays in with their surroundings, or hide them away entirely.

LG’s rollable OLED – the Signature Series OLED R – is expected to be released in 2020, after previously announced launch dates in 2018 and 2019.  This rollable OLED rolls up, almost like a carpet, and then unfurl again out of its base / TV stand. It can even unfurl to a third of its full height – at half-mast for showing the time or weather information. The rollable is such an incredible feat of engineering that makes use of OLED’s flexible properties, ensuring that those after an OLED TV have an option that can easily hide away when the TV isn’t being used. But LG hasn’t been able to get the yields up and if they do it has been rumored to be priced between $50,000 and $100,000