An international team including researchers from Osaka University reported a heavy-atom-free OLED that could compete in performance with phosphorescent material. TADF emitters are efficient but have not demonstrated the lifetime needed for display applications. Another type of heavy-atom-free emitter is room-temperature phosphorescence (RTP) emitters; however, the OLEDs using them show very low efficiencies of <1%, due to the quenching of long-lived triplet excitons in the device. The researchers therefore merged the mechanisms of TADF and RTP phenomena to produce a hybrid emitter that combines features of both systems. Their TADF/RTP material—called SiAz—contains only carbon, hydrogen, nitrogen, and silicon atoms, which are naturally abundant elements, making SiAz viable for widespread use.

"The energy level gaps in the excited states of an emitting material determine how the materials can behave upon the excitation and the emission they produce," study corresponding author Youhei Takeda explains. "Combining the two mechanisms meant that we could alter the way an excitonic molecule undergoes transition between the spin- and energetically-different states to produce the overall characteristics that we wanted. Specifically, by tuning energy levels, our material can utilize thermal upconversion system to produce RTP."
The researchers achieved a high degree of control over the energy levels through careful selection of the host material that the emitter molecule was impregnated into—which allowed thermally activated transition of the energetically-lowest triplet excited state to the higher triplet state of the emitter molecules to irradiate pure RTP in an efficient way. The SiAz material was used in a device that achieved an external quantum efficiency of 4%, which is the best reported to date for a heavy-atom-free OLED based on RTP.

Figure 2: Illustrative summary of the photophysical processes of SiAz in different host matrices. 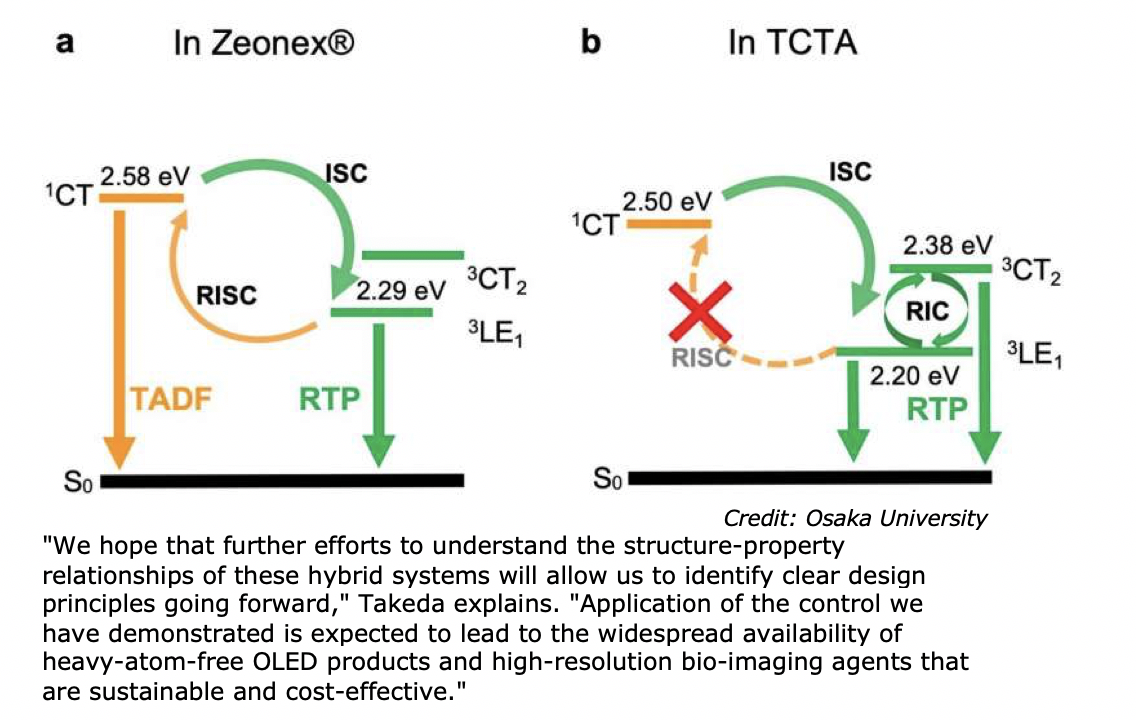