A research team from the Technical University of Dresden (TU Dresden) and the Weierstrass Institute Berlin (WIAS) has demonstrated experimentally that OLEDs will display regions of decreasing luminance with increasing driving current. The researchers showed that OLEDs not only saturate, but that certain regions in the OLED panel will “switch back” in brightness, getting darker in one area although the total applied current is increased. The term “switched-back” refers to the current density, which decreases locally in the OLED even as the total current continues to increase.
When LEDs and transistors are connected in parallel, even slight differences in resistance can lead to imbalanced current flow. If the devices heat up, this can lead to even greater imbalances.

This is especially true for OLEDs. A large-area OLED lighting panel is essentially a parallel connection composed of many individual OLEDs, and as a result, the panel can show nonhomogeneous light emission if it heats up. A saturation of brightness can occur even though the total applied current is increased continuously.
Proof of switched-back regions by detecting luminance changes in OLEDs: The bottom line of the figure presents the top-view sketches onto an OLED pixel at three different exemplary stages of total applied current. The top line estimates the luminance profiles across the indicated cross-section. While low-driving currents result in a homogenous luminance distribution (left column), elevated currents give rise to a gradually decreasing luminance profile (middle column). After exceeding a certain threshold current, the luminance will even reduce (“switch back”) in certain areas of the device (right column). 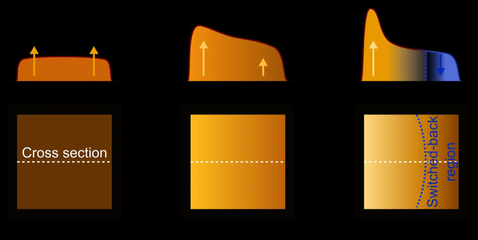 This so-called switched-back effect is related to the presence of the strong nonlinear electrothermal feedback in OLEDs that occurs when the OLED heats up. The heat induces negative differential resistance that makes the device prone to unstable operation.

The researchers knew that it would be difficult to measure the local current density, so they used a camera to detect the emission that corresponded to the local current flow. They surmised that if there were a decrease in brightness before the OLED degraded, it would be proof that switched-back regions in the OLED existed. The researchers observed a sudden decrease in luminance in the expected region of the active area very soon after the first negative differential resistance occurred.

“First, a region of negative differential resistance occurs and propagates through the device for increasing the supply current,” researcher Anton Kirch said. “At a certain point, they switch back regions that are distant to the electrodes and which do not have a sufficiently high power dissipation. One can imagine that these switched-back regions only ‘see’ the decreasing voltage of the OLED parts operating in the regime of negative differential resistance and do not ‘know’ that the externally applied voltage still increases.”

To confirm the experimental results, the researchers studied the interplay between current and heat flow in a nonlinear system, taking the different layers of the OLED into account. Mathematicians from WIAS created a simulation tool for solving the derived system of partial differential equations.

“We had to introduce an advanced path following [the] algorithm to capture the behavior of the device within the bistable regime, that is, when parts of the OLED operate in the regime of negative differential resistance,” researcher Matthias Liero said. After this was implemented, the numerical simulation was able to reproduce the experimental findings based on reasonable assumptions and parameters. “Frankly, we have been astonished about the qualitative and the quantitative agreement between simulation and experiment,” Liero said. “The shape and occurrence of the switched-back region were calculated as found in the experiment.”

The results of the experiment could affect the understanding and use of OLEDs in applications that require a high degree of brightness and long-term stability, such as applications found in the automotive sector. A better understanding of the OLED as a complex electrothermal system could help forecast device breakdown and lead to development of new strategies for better brightness uniformity and device stability. In the future, novel applications with ultrahigh light intensity, such as organic lasers, could also benefit from more complete knowledge about the effects of self-heating.

The researchers from TU Dresden and WIAS hope to continue their joint work on electrothermal feedback. The group is looking for additional partners from science and industry to help it transfer its results from lab-scale OLEDs to larger thin-film lighting panels and more complicated geometries. Its next challenge will be to create new strategies to prevent switched-back regions, to homogenize OLED luminance even with self-heating OLEDs.