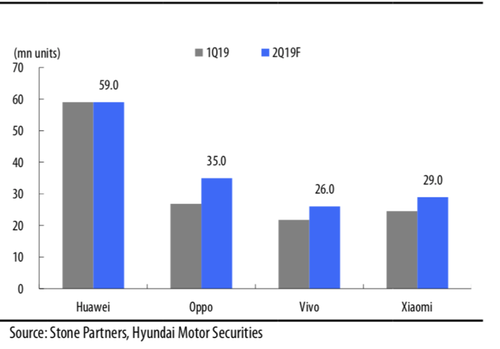 Huawei smartphones’ sales volume is estimated at 130mn units in China and 120mn units outside of China. The lift of the Huawei ban and resulting increase in smartphone parts orders is positive for memory semiconductor demand. Huawei plans to strengthen its marketing based on a two-pronged strategy. First, it plans to pick up promotions for 5G smartphones. Its high-end smartphones to come out at the end of this year will all be equipped with a 5G baseband chip and next year, it will make 5G available even for the smartphones with a modest price tag of CNY2,000. Second, it plans to raise the portion of smartphones with flexible OLED displays from 11% in 2019 to 25.8% in 2020. As such, flexible OLED displays, currently only featured in the P Series Pro and Mate Series Pro, will be introduced to the P Series and Mate Series as well, and several models of the Nova and Honor Series will also have flexible OLEDs. We believe BOE will become a major beneficiary of this move, and the companies in the BOE flexible OLED supply chain stand to benefit. 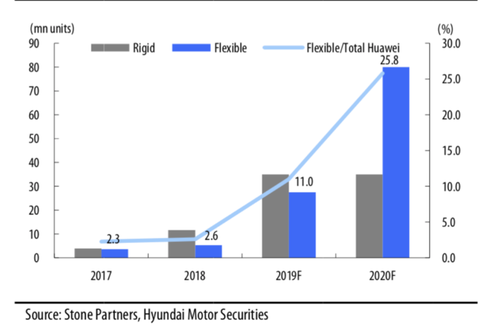 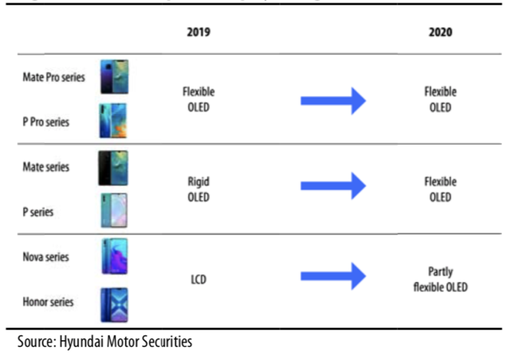 The next five weeks could prove to be a period of reckoning for Huawei Technologies’ smartphone business as the company prepares for the overseas launch of its next flagship device: the Mate 30. Huawei could launch the smartphone in Germany around mid-to-late September. But a successful launch would depend on a host of factors, chief among them whether the Chinese firm will receive approval to use Google’s Android operating system. Huawei is currently blocked from licensing Android from Google because of its inclusion on the US Department of Commerce’s Entity List, which bans American companies from doing business with Huawei without government approval. Company chairman Liang Hua, at a press conference on Tuesday, said supplies for less important products have recovered, but key components such as the Android OS are still blocked under the US trade ban. The latest Huawei smartphone on sale is the Mate 20 X, which still runs on Android because the license was granted before the US government put Huawei on its trade blacklist on May 16. Huawei could launch the Mate 30 and subsequent models without Android using its proprietary mobile operating system, which the South China Morning Postreported to have been under development since 2012.

Huawei could also postpone the Mate 30 launch while it works to regain the Android license, which would be a signal that the firm’s own OS is not yet ready for commercial use. Liang did not directly address a reporter’s question on whether the Mate 30 will be launched with Huawei’s own OS if it did not receive the go-ahead from Google. Maintaining a successful product rollout is crucial to Huawei because about 50% of its revenue is derived from its consumer business. The company said first-half revenue rose 23% to 401.3 billion yuan (US$58.3 billion). The firm also had the largest smartphone market share in China with 38% during the same period, up from 28% a year ago. Comparatively, other Chinese smartphone brands saw their market share decline. Following its inclusion in the Entity List, Huawei has targeted a significant increase in its share of China’s smartphone and telecoms network equipment market to help offset potential losses overseas because of the US action, the Post reported in late June. If Huawei has obtained the Android licenses for the upcoming Mate 30 series before May 16, then its use of that OS for the upcoming flagship models will not be affected, according to the person. Huawei declined to comment further on the details of its Mate 30 launch.

​The latest round of US-China trade negotiations began in Shanghai last Tuesday in extremely low-key fashion, with both sides seeking to play down expectations of a quick end to their trade dispute. Intel on Wednesday said it had begun selling products to Huawei again as the US begins to loosen the restrictions placed on the Chinese telecommunications giant in May. Intel was also seeking permission to sell "general purpose computing" chips to the company that he believes do not pose a national security risk. President Trump also met with leaders from Google, Cisco, Intel, Qualcomm, Micron, Broadcom, and Western Digital Corporation — all top producers of US technology equipment — to discuss national security restrictions against sales to Chinese telecommunications giant Huawei. Trump's meeting with prominent US chipmakers followed reports that Treasury Secretary Steven Mnuchin encouraged US suppliers to seek governmental approval to resume selling equipment to the embattled Chinese company in an attempt to uplift trade negotiations with China.  This week, Mnuchin and US Trade Representative Robert Lighthizer held a brief round of trade talks with their Chinese counterparts in Beijing after previous negotiations reached a deadlock in May and led to both countries announcing increasing tariffs on a wide array of imports.

Beijing said it considered this week's talks "constructive," according to CNBC, and agreed to reconvene talks with the US in September.

Trump initiated another round of American trade taxes on Chinese goods late last week. The first in-person trade talks since the US’s trade war truce with China last month were swiftly followed by the announcement of a 10% tariff on $300b of currently untaxed Chinese products. Unless a trade deal can be agreed by September, virtually all Chinese goods entering America will soon be subject to tariffs. China has allegedly failed to follow through on commitments to buy more American food and restrict the export of problematic opioids to the US. It responded on Friday by threatening to impose more of its own tariffs on US goods – and, if it exhausts those options, other penalties too. The price of a barrel of oil had its worst day in three years following the latest tariff tussle, falling 7%. US demand for oil has been on the decline, and a weaker Chinese economy would leave it needing less of the black stuff too. US oil production, meanwhile, increased 14% in May versus a year ago.

Two of the three major Japanese carriers announced that they would resume sales of Huawei smartphones, particularly the Huawei P30 Lite, one of Huawei’s more popular models in Japan that sells for ~$320.  KDDI indicated that Huawei’s product security had been upgraded and the US exception made for Google have satisfied its concerns while Softbank gave little detail on their reasoning behind the change.  NTT Docomo has yet to resume Huawei smartphone sales, but is expected to resume Huawei smartphone sales, as some smaller Japanese carriers did last month.