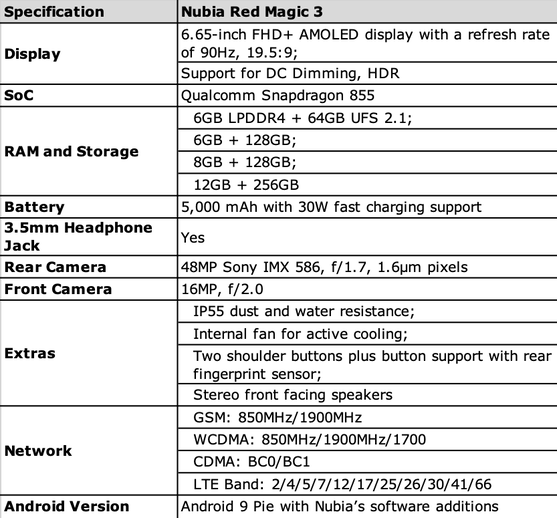 Source: xda-developers
​
Nubia seems to have missed the mark on the important phone parts, focusing specifically on the gaming aspect of the device. The Red Magic 3 is designed from the start as a gaming phone. Nubia took the classic “gamer aesthetic” of RGB and dark colors with red or green accents to heart. It has an aluminum body (though it feels like plastic) with red accents implanted into the corners. Going straight down the center is an RGB light. In the top fifth of the display, there is a 48MP camera and fan exhaust port. Right underneath that is the capacitive fingerprint scanner. 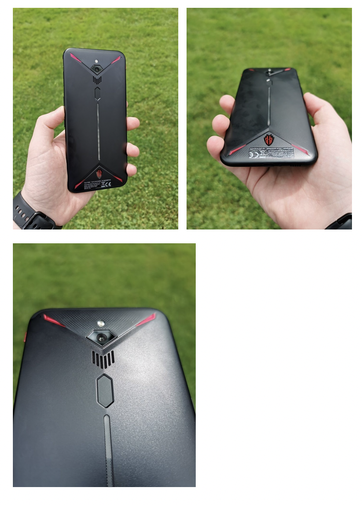 Source: xda-developers
​
​The left side of the device houses the SIM card tray and “Gaming Port.” This gaming port connects to the gaming dock (sold separately) and connects to a computer for game streaming. Above the SIM card tray is a “Game Space 2.0” switch, which enables the game mode controls. On the right side, we have two capacitive triggers. One is at the top of the phone, the other at the bottom. These are similar to what you would see on an Xbox controller but capacitive instead of mechanical. Right under the top trigger is another fan exhaust port. Below that is the volume rocker and power button. The top of the phone is simple with a 3.5mm headphone jack (yes, a real headphone jack in a 2019 flagship) and at the bottom the USB Type-C port. To the right of the Type-C port is a single speaker. At the top of the display is a speaker grill that is both an earpiece speaker and a top speaker, as the phone does have stereo speakers. 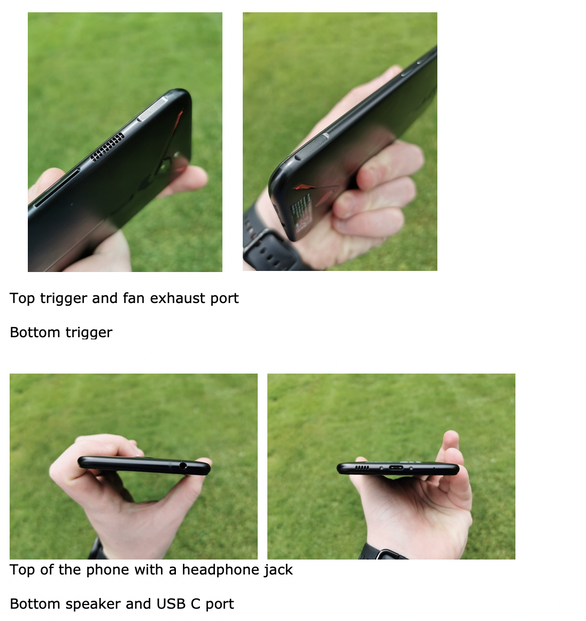 ​The display on the Red Magic 3 is not what I would call a bezel-less display by 2019 standards. It has slim bezels on the left and right side. The top and bottom bezel are by no means small or large. The top and bottom bezels are about 6.5mm. The top bezel has a single 16MP camera along with some sensors and an RGB notification light.
The Nubia Red Magic 3 has a 6.65-inch AMOLED display at 2340×1080 resolution (387.5ppi.) The Red Magic 3’s display is also one of the few to support a 90Hz refresh rate. Even though these specifications might not seem impressive, the very large display does a great job at providing immersion.

The 90Hz refresh rate of the display is super nice to have. It is always enabled and has no mode to turn it down to 60hz. That’s not an issue because the 5,000 mAh battery can push this thing for days even with 90Hz always on. The only thing is, however, few games support 90Hz. The 90Hz is only available in apps and in the SystemUI. You only notice it in scrolling and animations. That’s it. It feels like a waste to have such a high refresh rate display where the main selling point of the phone can’t support it. This is by no means a bad addition, but Nubia should have tried to work with game developers to get more 90Hz support in apps.

It does support HDR so the colors on the display are great. The Red Magic 3 has two display modes: Colorful mode and Natural mode. The natural mode uses sRGB which means the colors are almost the same on any other platform that uses sRGB. The Colorful mode supports wide color gamut.

The Nubia Red Magic 3 is powered by the Qualcomm Snapdragon 855 and Adreno 640 GPU. These are both the best of the best when it comes to mobile processors. As a gaming phone, it needs to be fast and fast it is. Below are some benchmarks I ran to try to figure out just how fast it is. Don’t buy the Nubia Red Magic 3 if camera performance is important. While, the phone uses the same Sony IMX 586 sensor as many other flagships with great cameras like the Honor 20 Pro, Xiaomi Mi 9, and OnePlus 7 Pro, the difference comes down to camera software. The tuning on the Red Magic 3 camera results in pictures with terrible HDR and no detail when zooming or cropping. As for the front-facing camera, there is no detail in the picture and there’s a sort of beauty filter. It also looks as though it has some sort of blur on the lens, distorting the focus. It is as though there is a fingerprint on the camera lens. Video has one very special feature: 8K video at 15fps.

The gaming mode has a panel that can be swiped out to show. This panel gives access to the fan settings, 4D shock, touch buttons, brightness, and a few other settings. It also shows the CPU temperature and battery percentage. This phone is all about gaming. From the design to the software to the internals, Nubia designed the Red Magic 3 with gaming in mind. That’s why it has the capacitive triggers on the side of the phone, an internal fan for cooling, and a 90Hz AMOLED display. Altogether, these components make the Nubia Red Magic 3 one of the best gaming devices you can buy. This phone is probably less of a phone and more of a gaming device. It’s lacking NFC and has mediocre speakers, but it has amazing battery life and the “gamer aesthetic.” The Nubia Red Magic 3 doesn’t feel like it’s designed to be a device for the masses, instead, it seems as though it’s designed to be a secondary device specifically for gaming. Buying a secondary device isn’t really practical for many. That makes the $479 price tag a bit steep, as it is advertised as a full-featured flagship phone. It does not have enough of what makes modern flagships worthwhile to be paying what is very close to flagship level prices.
Table 1: Nubia Red Magic 3 Specs