While Samsung, Huawei and Motorola pursue foldable smartphones OPPO and vivo are into fastest charging technologies. They will be introducing a 120W Super FlashCharge that’s ready for the public next month. 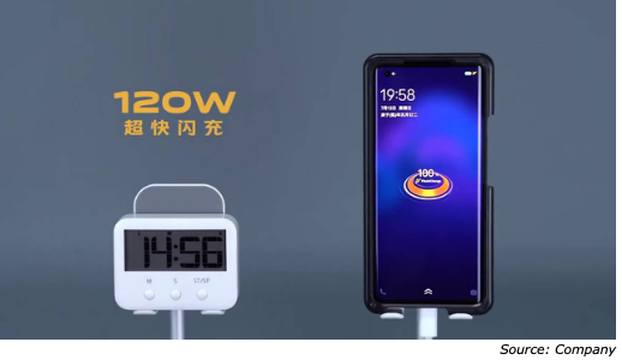 Xiaomi previously tried but withdrew when its 100Wcharger overheated.
Vivo sub, iQOO explained some of the non-proprietary technology that makes it work. It involves dialing down the voltage while increasing the amp as well as splitting the current between two charging circuits and two battery cells. It’s not unlike what OPPO already uses for its 65W charging, just with more power involved.
The result is that the 120W Super FlashCharge system can juice up a battery from zero to full in 15 minutes. Exactly the time that iQOO allotted for its press conference. It also contrasted it with another phone charging at 55W and barely reaching 50% within that same time frame. But there are times when topping up fast could be handy. And that’s the idea behind OPPO’s new 125W Flash Charge spec being unveiled today.
​