The Realme GT Neo will launch with the Dimensity 1200, which was unveiled by MediaTek in January. The Dimensity 1200 is fabricated on TSMC’s 6nm process and features an integrated 5G modem, which supports 5G NSA and SA modes, 5G carrier aggregation across FDD and TDD, and more. The chip also features an octa-core SoC with a prime Cortex-A78 clocked up to 3GHz, and the other three performance cores are Cortex-A78 cores clocked up to 2.6GHz. Realme said the GT Neo will be the first in a lineup of devices launching under its “dual platform + dual flagship” strategy in 2021. A device thought to be the GT Neo was spotted on TENAA. Some of the specs revealed by the filing included a 6.55-inch curved display, Android 11, and a 4,400mAh dual-cell battery. The device appears to feature a triple-camera setup, but the specs of that setup still remain unknown.
The device will be targeted at consumers in China, where it will be announced at 2:30 p.m. local time. The Realme GT was a high-end flagship equipped with a 120Hz AMOLED Display, Snapdragon 888 processor, and stainless steel VC cooling system. The GT Neo isn’t going to be as premium, which means it will likely be offered at a more affordable price. Despite the prices of top-tier smartphones rose a lot in the last years, you can still find amazing flagship killers with top-tier hardware departments at amazing prices. One of them is definitely the Realme GT 5G: its camera is the only compromise, but it has nothing to envy to the most expensive phones in the market in terms of hardware. 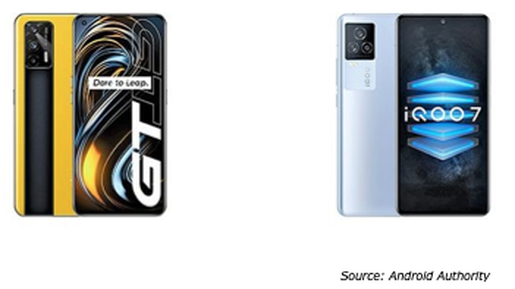 ​Realme GT 5G and iQOO 7 are two devices offering a premium design. The Realme The Realme GT 5G is a more compact phone than the iQOO 7: even though it packs a bigger battery, it is thinner and lighter. That is the reason why I prefer it to the Vivo iQOO 7. Realme GT 5G and Vivo iQOO 7 come with displays boasting very similar specifications. Both have the Full HD+ resolution with 1080 x 2400 pixels, the HDR10+ certification, and a 120 Hz refresh rate. With these AMOLED panels, you can get an outstanding image quality, despite they are not the best out there. The most important difference is the diagonal: 6.43 inches for the Realme GT 5G and 6.67 inches for the Vivo iQOO 7. Realme GT 5G and Vivo iQOO 7 sport the best hardware department you can expect from a 2021 flagship, including the Snapdragon 888 mobile platform (the best one released by Qualcomm until now), up to 12 GB of RAM, and up to 256 GB of UFS 3.1 native storage. Thanks to this hardware department, you can do everything with these handsets while keeping the maximum speed you can expect on an Android phone. They run Android 11 out of the box with a highly-customized user interface on top: the Realme GT 5G has the Realme UI 2.0 which is actually similar to ColorOS 11 by OPPO, while the Vivo iQOO 7 has the brand new OriginOS which replaces Funtouch OS. The best camera phone of this comparison is the Vivo iQOO 7: while the Realme GT 5G has midrange-class cameras, the Vivo iQOO 7 is closer to the high-end segment thanks to a 48 MP main sensor supporting optical stabilization and a 13 MP telephoto sensor with 2x optical zoom. It is not among the best camera phones, but it is way better than mid-rangers when it comes to photo quality. Alongside the main sensor and the telephoto lens, you get a 13 MP ultrawide sensor and a 16 MP selfie camera. Unfortunately, Realme GT 5G lacks a telephoto sensor and OIS, but it still comes with a pretty nice 64 MP main camera supported by an 8 MP ultrawide sensor and a 2 MP macro camera. Realme GT 5G offers a longer battery life thanks to its big 4500 mAh battery. The Vivo iQOO 7 has a 4000 mAh battery, below-average if we consider the other flagships released this year, but there is a reason for it: providing the fastest charging speeds. Indeed, the Vivo iQOO 7 supports 120W fast charging which is actually the faster commercial charging power.

Realme GT 5G went on sale in China with a €517/$618 starting price tag, while Vivo iQOO 7 starts from €480/$574. At the end of the day, if you do not care about the cameras, then Realme GT 5G is a better choice due to its bigger battery, stereo speakers, compact design. But if you do, then Vivo iQOO 7 is a better choice since its cameras provide way better performance. Further, 120W fast charging is a killer feature, especially at that price.