Quibi was bound to succeed; Streaming, Smartphones, Short, Meg Whitman, Jeffery Katzenberg … Quibi arrived amid a frenzy of streaming platform launches. For years, pioneers like Netflix, Amazon Prime Video, and YouTube dominated this sector. But in 2019 Apple Plus and Disney Plus, were launched followed in 2020 by NBC Universal’s Peacock and HBO Max.

But there are numerous reasons why Quibi’s mobile video platform has been a bust so far, launching during the pandemic causing the number of videos people watched on mobile to dropped 1% Y/Y in April and it continued to fall through June to -35% Y/Y. Adobe’s 2019 data made a Quibi-like service seem promising, but pandemic-driven lockdowns have reduced demand for the kind of bite-sized entertainment the company hoped to exploit.

Even though many observers raised this issue in the days leading up to the April launch, Quibi executives maintained a bullish outlook as other forms of video streaming surged during the initial weeks of coronavirus lockdowns. But while streaming overall did explode, video on mobile devices took a nosedive.
“When we looked at video starts across platforms, mobile was seeing growth in 2019, as well as the first few months of 2020,” the Adobe report reads. “It was an opportunity area for content providers. After COVID-19, shelter-in-place orders have shifted this significantly. While the Adobe Digital Economy Index shows growth in areas like mobile shopping, video consumption on mobile is not driving growth.”

Quibi, which was capitalized by VCs to the tune of $1.5b fell flat from the start. The app quickly dropped out of the top downloads in app stores, and by the end of May it only had 1.5 million active users, according to the Wall Street Journal. While the company had hoped to have 7.4 million subscribers by the end of 2020, it has now reduced that projection to 2 million. The Adobe report analyzed more than 24 billion video starts and 6.6 billion hours of video content viewed on OTT, desktop, and mobile phone platforms in the U.S. between January 2018 and July 2020. The findings echoed previous reports that video streaming has been booming. But while mobile video starts are down, desktop viewing has taken an even bigger hit, falling 21% year-over-year in April and dropping 40% in July.

LG Display’s transparent OLED panels have been installed on subway windows in Beijing and Shenzhen, China. The 55-inch OLED display shows various information, from news to a subway transit map, in real time on a moving train. The company expects to supply more transparent OLEDs to subway trains in major cities. 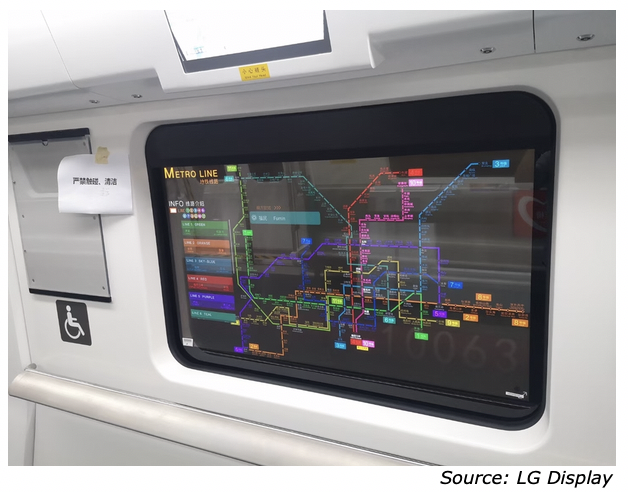 According to consulting firm Prescient & Strategic Intelligence, the global transparent display market is expected to grow to US$4.9 billion in 2024, with average annual growth of 46 percent.