Quest 2 replaces the original Quest. All current games are compatible, and it still supports Link mode for access to Rift & SteamVR. Quest 2 replaced the OLED panels with a higher resolution 90 Hz LCD, upgrades the processor to Qualcomm’s Snapdragon XR2, shaves off around 70 grams, and sports a simplified 3-step lens adjustment mechanism. The controllers have significantly longer battery life and improved ergonomics. The Quest 2 is priced cheaper than the original- $299 for the 64GB base model and $399 for a 256GB model. The original Quest used dual PenTile OLED panels with a resolution of 1440×1600 each. Quest 2 now uses a single LCD providing 1832×1920 per eye. Quest 2 has higher resolution than Valve’s Index- but just short of HP’s upcoming Reverb G2. 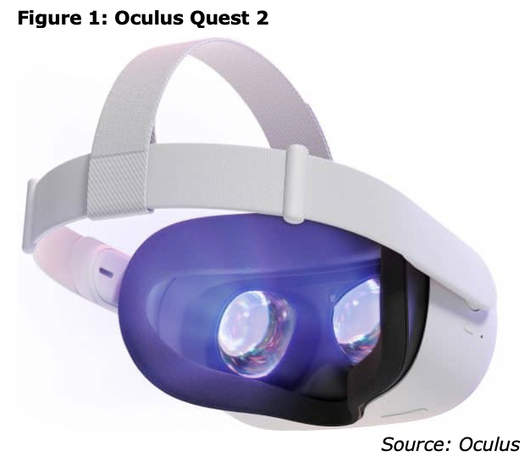 Most VR headsets, including the original Rift from 2016, have a refresh rate of 90Hz. The original Quest’s refresh rate was 72Hz, and this remains Quest 2’s default, but apps & games can support a new ‘experimental’ 90Hz mode for a smoother, more responsive experience. Link will get 90Hz support in a near future update.
​
The switch from OLED to LCD means Quest 2 has lower contrast, slower response time ad no deep black, but the display cost is probably lower. The original Quest shipped in mid 2019 but used the Snapdragon 835 – Qualcomm’s 2017 flagship.
Quest 2 sports the latest & greatest Snapdragon XR2, a variant of the 865 designed specifically for headsets. That’s a 3-generation jump delivered in a $100 cheaper headset. There’s also an extra 2GB RAM, for a total of 6GB.

​On paper, Quest 2 should have double the processing power of the original. However, the original’s Snapdragon 835 was actually overclocked, cooled by an internal fan that’s sometimes just barely audible. Facebook tells us Quest 2 uses an improved heat sink design but didn’t mention a fan, and we didn’t hear one. If true, the real-world performance gain likely won’t be quite double- but this decision may have contributed to the weight reduction. Games run at higher default resolution on Quest 2. And if a developer supports 90Hz mode- requiring 25% more frames per second- it’s not clear how much extra performance is left over for shader, lighting, and geometry improvements. Fixed Foveated Rendering, the feature which reduces resolution at the edge of the lenses when performance is tight – activates less often and less harshly.

Each person has a slightly different distance between their eyes- their interpupillary distance (IPD). If the VR lenses aren’t closely aligned with the eyes, the image can be blurry, and this can even cause eye strain. The original Quest featured a precise lens adjustment slider- slightly modified from the original 2016 Rift- allowing lens separation to be adjusted between 59mm and 71mm.

The lenses were fixed in place on Oculus Go and Rift S, likely to save on the cost & complexity of the granular adjustment mechanism. Quest 2’s lenses are moved by hand- just grip the cups. They click between 3 distinct separation positions: 58mm, 63mm, and 68mm. Facebook believes its lenses work “best” within +/- 2mm. If still true, Quest 2 should be “best” for IPDs between 56mm and 70mm.