Qualcomm’s Snapdragon 888 added incremental improvements to CPU and GPU performance, but massive improvements to image processing and AI. Although improvements in CPU and GPU will hardly be noticeable when upgrading from a two-year-old device, significant advancements have been made in mobile technology. Devices have higher refresh rate displays, more cameras with higher resolution image sensors, support for 5G connectivity, and much more these days. The massive gains in AI performance will go unnoticed by the average user, but the possibilities that have opened up with Qualcomm’s new chipset include, real-time AI video enhancements, multi-camera streams, and more are on the horizon next year.
Qualcomm isn’t the only company making improvements to its SoC lineup. Samsung’s upcoming Exynos 2100 for the Galaxy S21 is said to bring major performance improvements. There’s also Huawei’s new HiSilicon Kirin 9000 and MediaTek’s growing Dimensity line of mobile SoCs. Below is the table that Qualcomm provided summarizing the Snapdragon 888’s benchmark results: 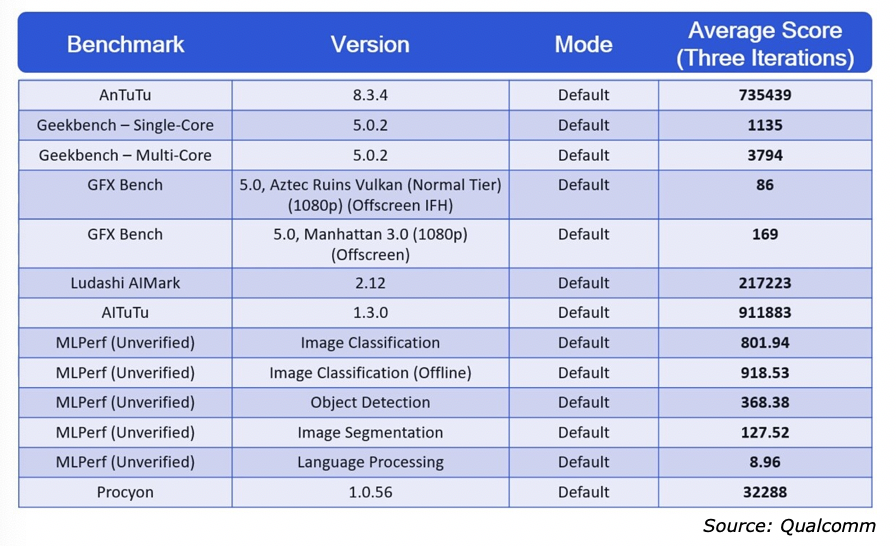 In December, Qualcomm invited journalists to a virtual Snapdragon Tech Summit where they announced the Snapdragon 888 mobile platform. Qualcomm’s latest 8-series SoC brings major improvements to image processing and machine learning but only incremental improvements to CPU and GPU performance. To find out just how much more powerful Qualcomm’s latest chipset is, we typically get the opportunity to run benchmarks on its reference hardware.  On the Snapdragon 888 reference device, Qualcomm ran one holistic benchmark (AnTuTu), a CPU-centric benchmark (Geekbench), a GPU-centric benchmark (GFXBench), and several AI/ML benchmarks (AIMark, AITuTu, MLPerf, and Procyon). 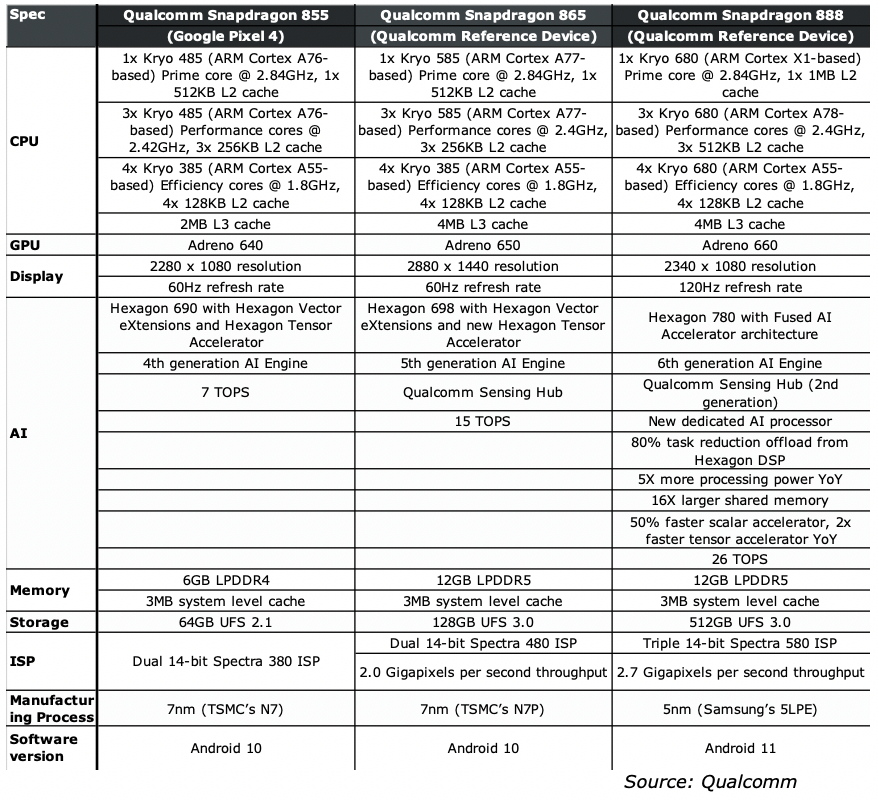 Each benchmark was run three times, so the company shared the average result across three iterations. In addition, the company says they ran each benchmark using the default settings on the Snapdragon 888 reference design, meaning they did not enable any high-performance mode. However, because the benchmark scores were provided for us, we can’t verify the results or testing conditions for ourselves. Once we get our hands on a commercial device with the Qualcomm Snapdragon 888, we’ll rerun these benchmarks. 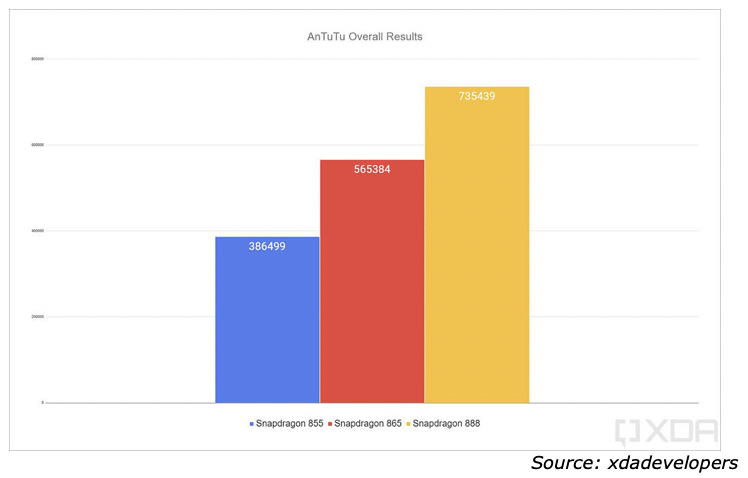 Geekbench Results
In Geekbench 5.0, the Qualcomm Snapdragon 888 performs 22.17% and 9.97% higher in the single-core and multi-core tests respectively compared to the Snapdragon 865. Compared to the Snapdragon 855, the 888 performs about 89.17% and 51.82% better respectively.
Qualcomm says the Snapdragon 888 provides a 25% boost in CPU performance over the Snapdragon 865. The CPU’s lone ARM Cortex-X1 Prime core is clocked at a conservative 2.84GHz — the same clock speed as the last-gen ARM Cortex-A77 Prime core — so it’s possible that we’ll see a 3+GHz clock speed for the inevitable mid-year Snapdragon 888 “Plus” refresh. If that’s the case, we can expect the CPU performance to improve even further, though right now, it’s fair to say the gains are solid, yet merely incremental.
Thus, if you’re upgrading from a two-year-old flagship, the 888 should bring major improvements in CPU performance. If you’re upgrading from a year-old flagship, those gains are much smaller. I’m personally excited to see how a Snapdragon 888 device handles console emulation. 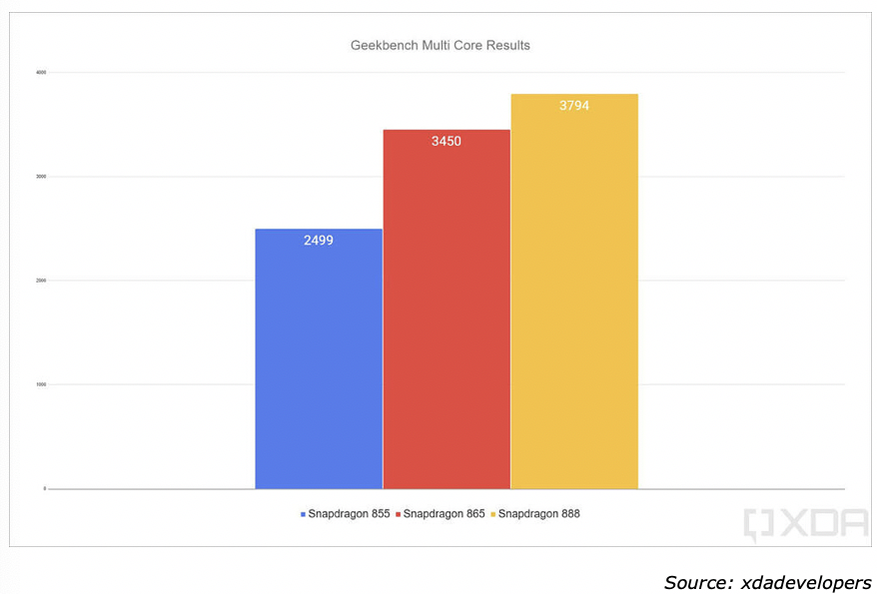 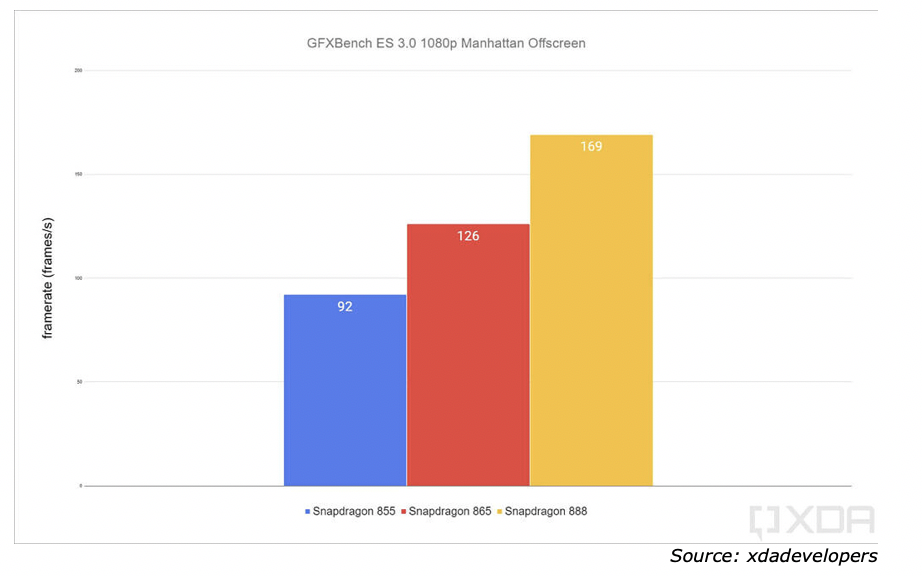 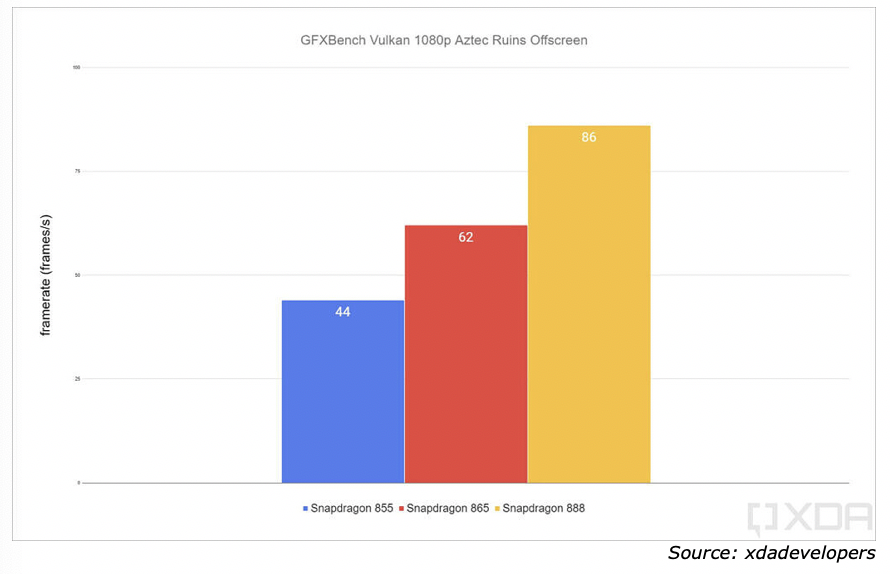 It is difficult for us to demonstrate just how significant this leap in performance actually is, however. The good news is that, since our discussions with Qualcomm execs, there have been significant advances in the field of AI benchmarks.
At the beginning of this article, we mentioned that Qualcomm ran 4 different AI benchmarks on the Snapdragon 888 reference device: AIMark, AITuTu, MLPerf, and UL’s Procyon. Perhaps the most promising of these benchmarks is MLPerf Mobile, which is a soon-to-be-released, open-source mobile AI benchmark backed by multiple SoC vendors, ML framework providers, and model producers. Its initial batch of mobile inferencing results is public, so we used those results to compare with the Snapdragon 888. The results only cover 3 devices: the MediaTek Dimensity 820-powered Xiaomi Redmi 10X 5G, the Qualcomm Snapdragon 865+-powered ASUS ROG Phone 3, and the Exynos 990-powered Samsung Galaxy Note 20 Ultra 5G. Qualcomm did not provide latency results — only throughput figures — so we did not plot the full results as submitted by the vendors for verification by MLCommons.
​
In these select computer vision and natural language processing inferencing benchmarks, we can see that the Qualcomm Snapdragon 888 reference device achieved the highest scores in all four tests. Of the 3 previous-generation chipsets, MediaTek’s Dimensity 820 outperformed the Snapdragon 865+ and Exynos 990 in object detection, while the Exynos 990 outperformed the Snapdragon 865+ and Dimensity 820 in NLP. Qualcomm’s Snapdragon 865+ was generally competitive, scoring on par with the Dimensity 820 in image segmentation and outperforming it in NLP. In these specific inferencing tests with these specific models and datasets, the Snapdragon 888 outperformed the 3 last-gen chipsets.

It will be interesting to see what applications and features developers and OEMs can create using the AI prowess of the Snapdragon 888. Computer vision will play an especially important role in the many AI-enhanced videography features we’ll likely see in 2021, while improved NLP performance can likewise affect video adjacent aspects like audio recording. 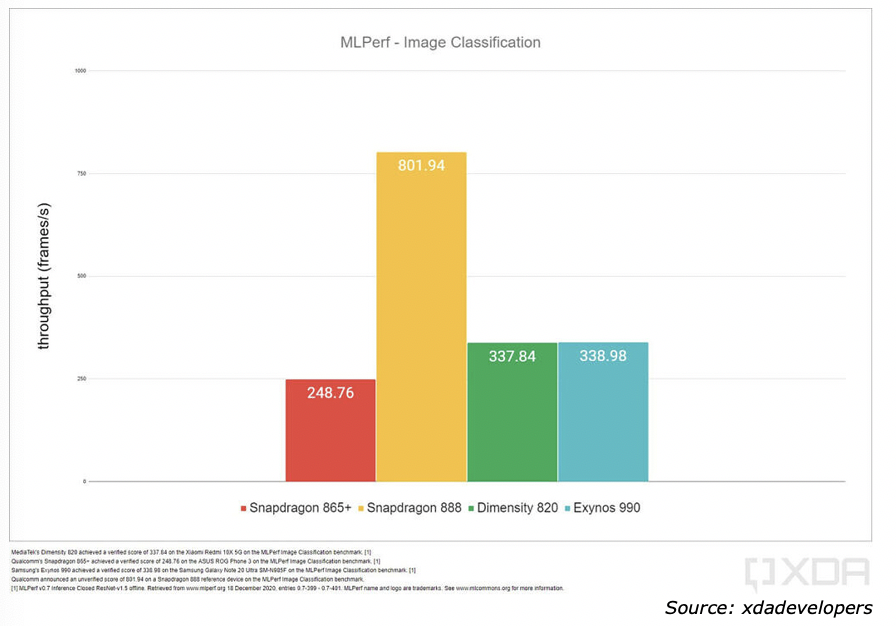 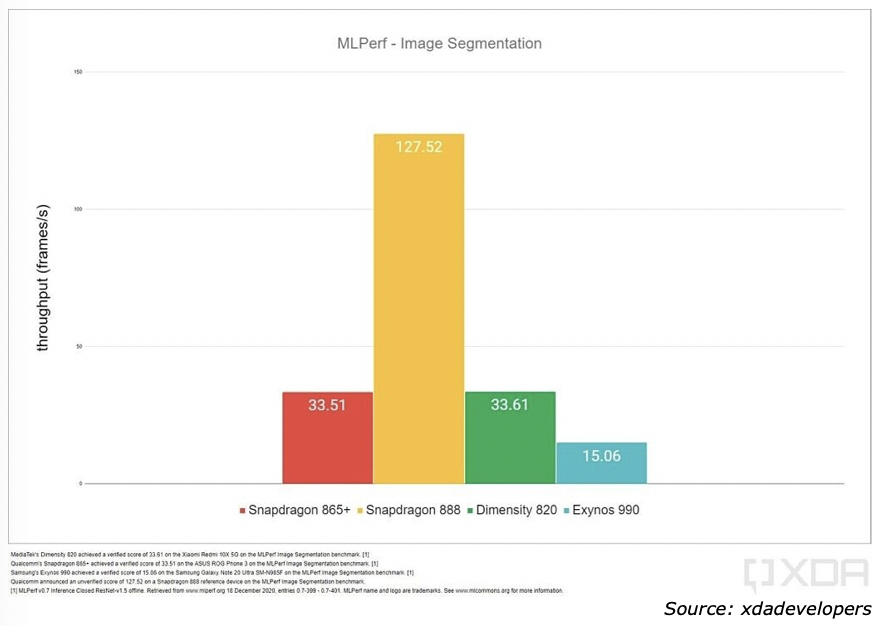 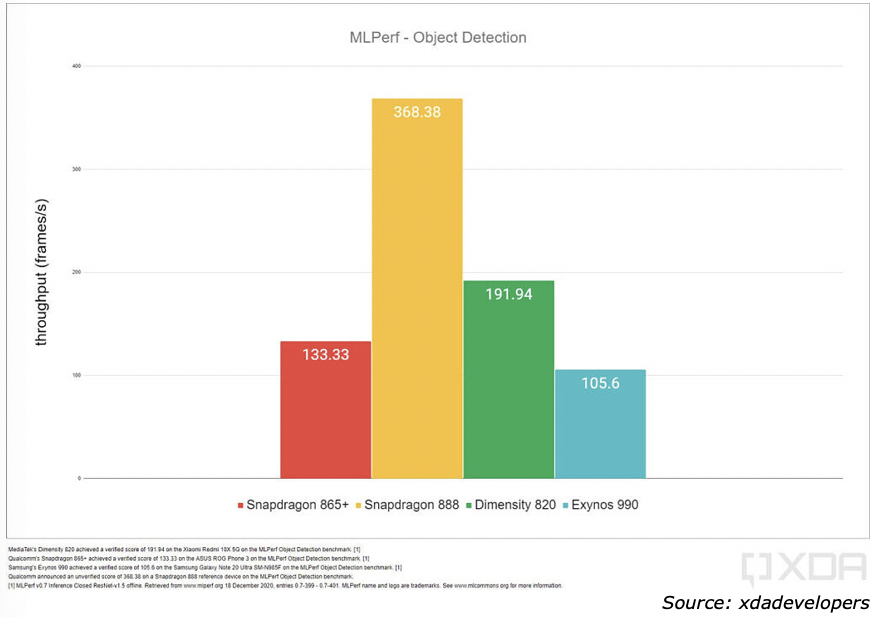 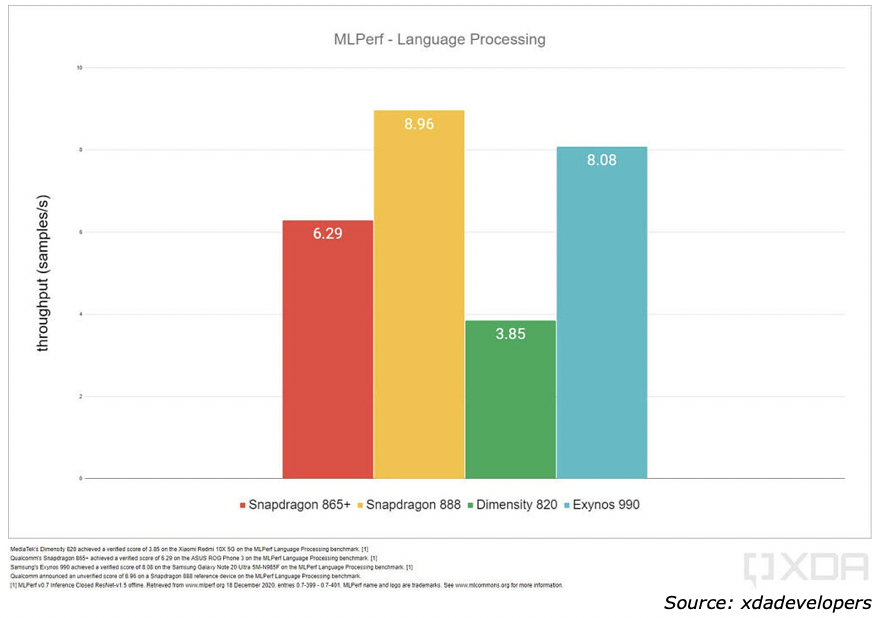 ​The Snapdragon 888’s results are unverified by MLCommons since part of the organization’s verification process require that the device be commercially available (Qualcomm’s reference devices are not sold through a carrier or as an unlocked phone). Furthermore, the performance depends on what ML models, numerical formats, and ML frameworks are chosen, as well as what ML accelerators are available.