Qualcomm announced its next-generation chipset, the new Snapdragon 888, which will power most good Android flagships in 2021, and take the fight to Apple’s A14 chipset. The 888 is based on the 5nm node, manufactured by Samsung, not TSMC. The company hasn’t made any custom CPU core since the original Kryo core in 2016, so it’s dependent on ARM to make steps forward. The 1x Cortex-X1 + 3x Cortex-A78 combination seems a good fit to balance performance and power draw, although the single-threaded mobile CPU performance crown will still remain out of reach for Qualcomm. The clock speed of the Prime core is a bit conservative, but that should mean reduced power levels. This is more a reflection of Apple’s outstanding CPU cores rather than an indictment of ARM’s CPU cores, which still remain great in a vacuum. The Snapdragon 888 should be about 25% slower than the A14 in single-threaded CPU performance. If it does achieve parity with the A13’s single-threaded performance, it means it can potentially stand head-to-head or even outperform Intel’s Tiger Lake CPU core as well as AMD’s Zen 2 core in terms of IPC. 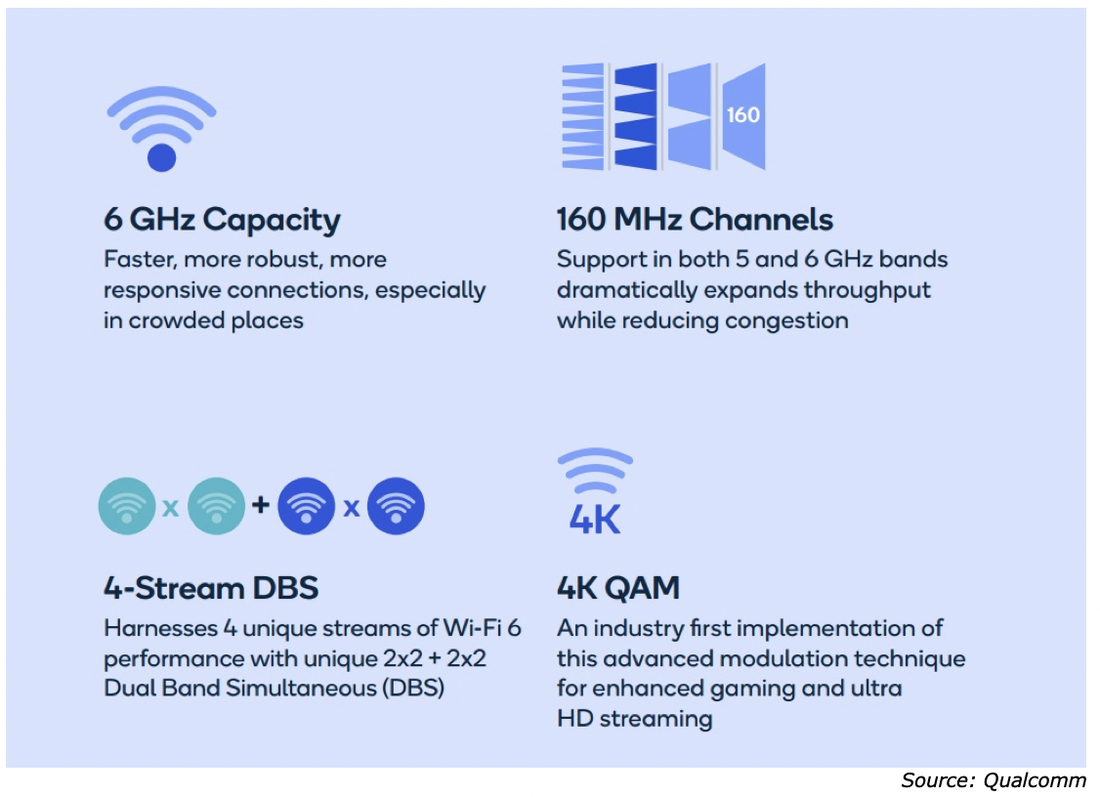 Qualcomm has been achieving a number of milestones with its Spectra ISPs over the last few years, which have been dual-ISP since their beginning five years ago. The Spectra 280ISP brought support for 10-bit color depth HDR video capture, then the Spectra 380 ISP in the Snapdragon 855 was the world’s first CV-ISP, and in 2019, the Spectra 480 ISP boasted of an impressive 2 gigapixels/second processing speed. Now, the Spectra 580 ISP brings quite a few major leaps forward with a new triple ISP architecture, 35% speed increase, support for staggered HDR sensors, and more. 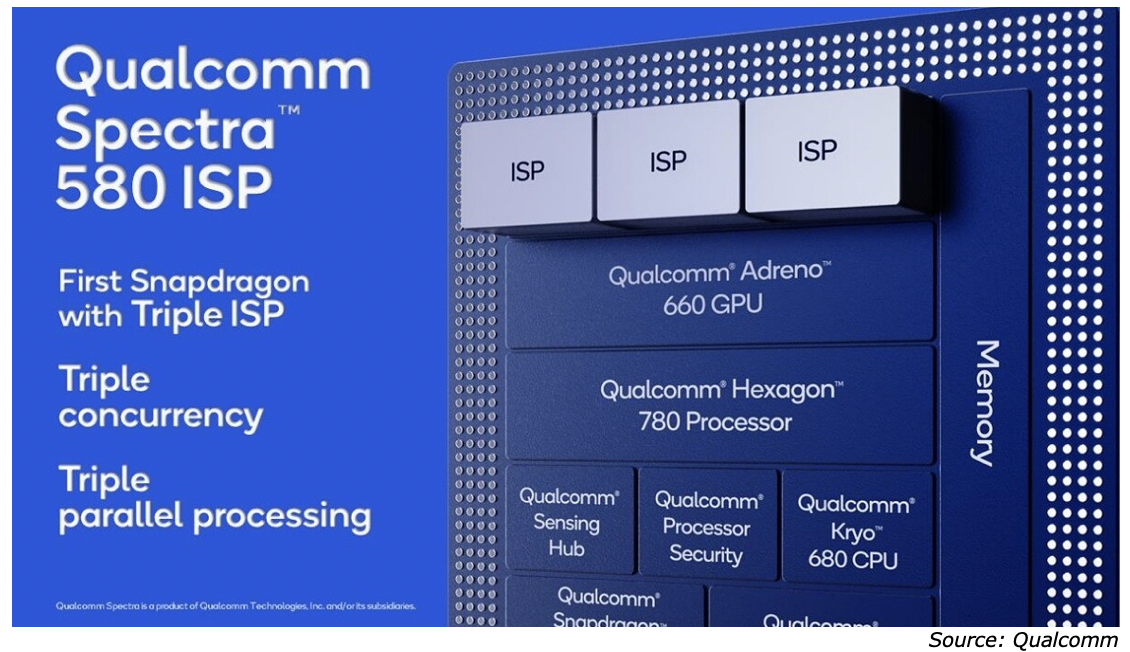 The Spectra 580 is the first Spectra with a triple ISP, which Qualcomm says will take professional image quality to the “next level”. It delivers triple camera concurrency and triple parallel processing. Qualcomm explains that most flagship phones these days come with at least three rear cameras with three different lenses: ultra-wide, wide, and telephoto. Triple concurrency enables users to record video from three different cameras at the same time in 4K HDR quality. It’s also applicable for photos, where the triple ISP can capture three photos at the same time at 28MP each. Triple concurrency will provide smoother transitioning when zooming between cameras. As of now, when users start shooting with their wide-angle (standard) camera on a dual ISP, Qualcomm had to guess if they were going to zoom in to their telephoto or zoom out to their ultra-wide. The company no longer needs to do that with triple concurrency, as it can now run all three cameras in the background and instantly switch to the camera users choose. The Spectra 580 is 35% faster than the Spectra 480, which means it can now capture 2.7 Gigapixels/second. Qualcomm uses that speed for faster burst photography. In one second, the ISP can now capture 120 photos at 12MP each.

Qualcomm says they will debut in smartphones soon, and they have the potential to “dramatically enhance HDR video quality”. It explains that staggered HDR image sensors output separate long, medium, and short exposures. Current image sensors capture one image at the same time that staggered HDR can capture three images, all with detail in different bright or dark parts of the scene. Then the Spectra 580’s triple concurrency can merge all of these images together to bring the user one final image with “incredible” dynamic range. This technique has been available for photo capture with previous SoCs, but for the first time with the Snapdragon 888, users will be capture 4K HDR video with computational HDR.
​
Improvements are there for photo capture as well. The Spectra 580 can now capture photos in 10-bit color depth in the HEIF format. Users will be able to capture photos in 1.08 billion shades of color, up from the 16.7 million colors that 8-bit color depth has. Qualcomm is four years late in this aspect as Apple has been able to take 10-bit HEIF photos since the iPhone 7 back in 2016. However, it’s good to see that this feature will finally arrive on flagship Android phones in 2021. Qualcomm notes that the Snapdragon 865 added video capture in the Dolby Vision format, but as of now, no Android phone supports Dolby Vision capture or playback, with the features being restricted to the Apple iPhone 12 series. A few Android phones can capture 4K HDR video in HDR10 or HDR10+ formats, though.

Snapdragon 888 devices will be able to capture 4K at 120fps just like the Snapdragon 865. Now, they will also be able to play such videos at 120fps for smooth video playback.
Qualcomm notes the basics of a professional-quality photo start with 3A: autofocus, auto-exposure, and auto white balance. For sharpness, dynamic range, and color accuracy, these aspects must be correct. The company notes that it puts “massive amounts of time and resources” into refining its 3A. The Spectra 580 features its 10th generation 3A algorithms. It’s also the first time that 3A will be powered by AI.

The company states that its new Saliency Auto Focus and Auto Exposure Engines are “incredible”, as they were built using virtual reality headsets equipped with eye-tracking. It trained the Saliency Auto Focus and Auto Exposure neural nets by showing people images in VR and tracking their eyes to see which part of the image they focused on. The new 3A promises to make image accuracy better.
The Spectra 580 ISP also brings a new low light architecture. Users will now be able to take photos in 0.1 lux, which is near darkness. This could mean less reliance on multi-frame image stacking in the form of camera night modes, and a renewed emphasis on zero shutter lag.

The Snapdragon 888’s camera experience also benefits from its 6th generation AI Engine (more on this below). Arcsoft, a third-party vendor, has shown how the AI Engine can improve the camera experience. Qualcomm notes that in the past, point-and-shoot wasn’t point-and-shoot in the literal sense, as users had to select what they wanted to focus on, then zoom in and out to frame their photo and video. The Triple ISP is now always capturing video, and Arcsoft will use the ISP and the AI Engine to track and zoom in and out automatically, which will deliver on the true promise of the point-and-shoot paradigm. Ultimately, Qualcomm claims that Snapdragon 888 smartphones will become professional-quality cameras thanks to the Spectra 580 ISP. If these claims do play out, we could be looking at significantly improved Android smartphone cameras in 2021. 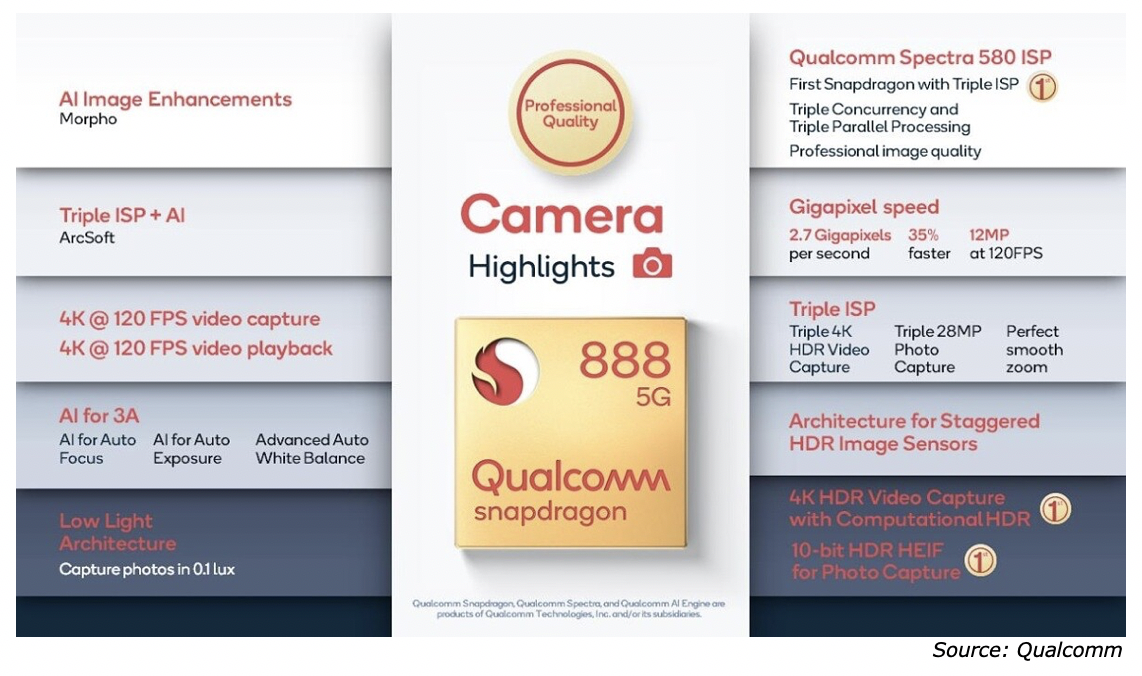 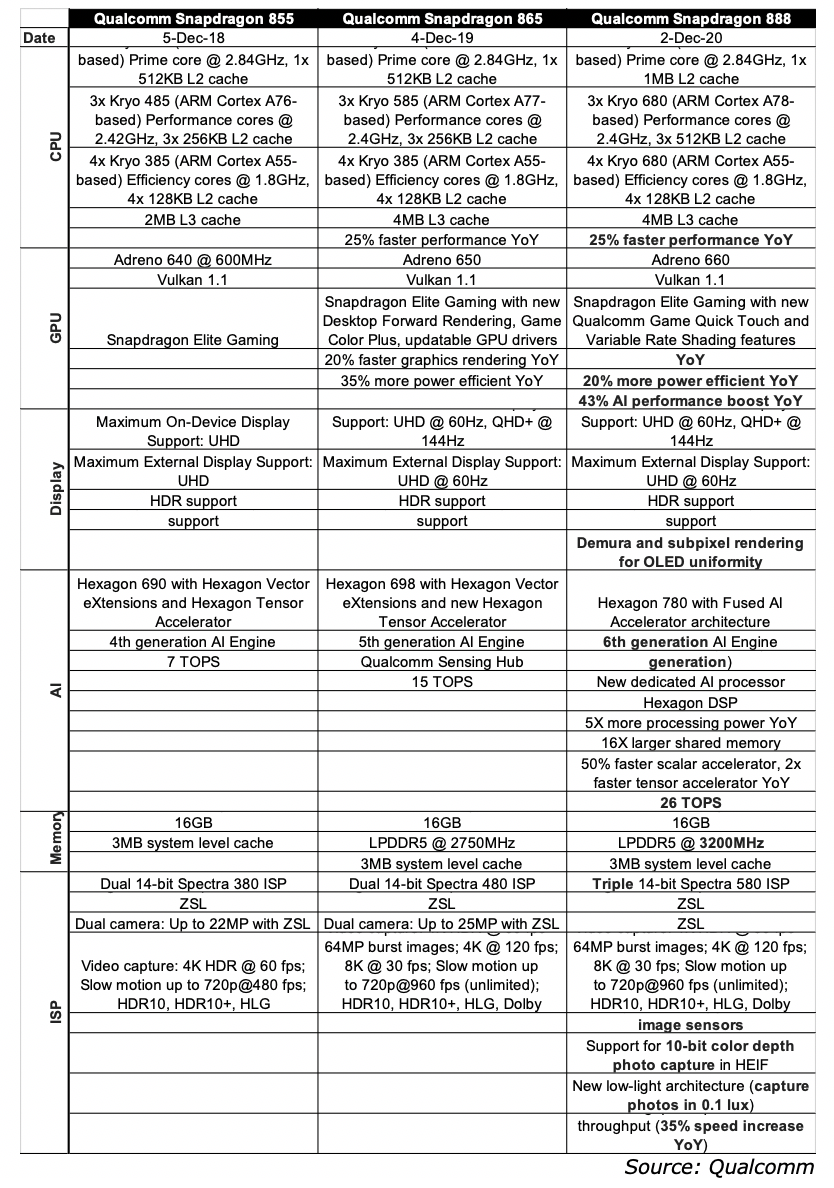 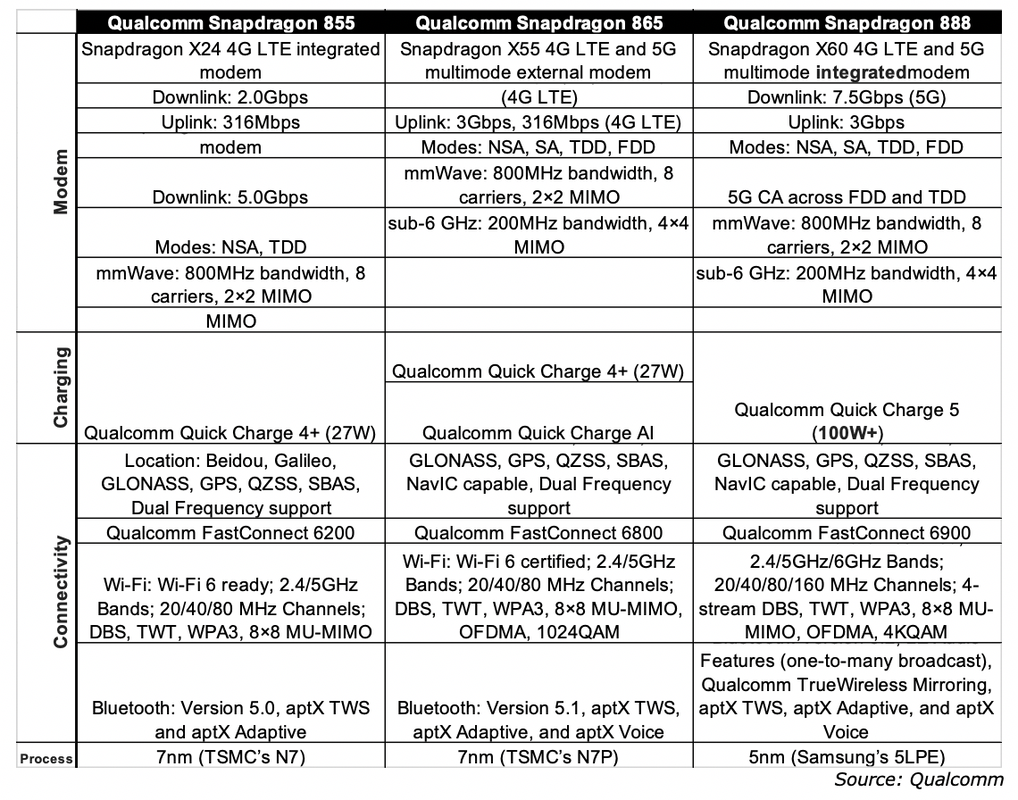 The Snapdragon 888 is a respectable step forward for Qualcomm. Yes, it’s overshadowed and outgunned in both CPU performance as well as GPU performance by the new behemoth in the chip industry – Apple. However, as Qualcomm keeps reminding us, there’s more to a great chip than a CPU and a GPU. Qualcomm’s resources this generation have been spent on the AI Engine and the Spectra ISP, and the improvements made in both fields seem quite promising. If we constrain ourselves to the Android SoC market, it’s hard to see a 2021 where the Snapdragon 888 isn’t the best Android flagship SoC. The Exynos 2100 is expected to make a big leap in CPU performance, but the two chips will be roughly tied even in the best case, depending on clock speeds. Qualcomm still enjoys a comfortable lead in GPU performance over both Samsung and MediaTek, as Samsung won’t switch to AMD’s RDNA GPU architecture until 2022. Also, Qualcomm still seems to be in the lead when it comes to the AI software stack.

The partners” that will launch a premium smartphone based on the Snapdragon 888 next year, included Xiaomi, LG, OnePlus, Oppo, Motorola, Asus, ZTE, and the usual brands.