Samsung Display and its sister companies, Samsung Mobile and Samsung Visual have been conflicted over the last couple of years. Samsung Mobile wants a second source for OLED panels and has reached out to SDC competitor’ BOE seeking lower price panel replacements for some of their models. BOE tried to qualify its OLED panels but they didn’t pass the quality screen. Samsung Visual tried to slow down development of QD-OLEDs by arguing at the Chairman’s level to use the funds allocated for QD-OLEDs for Micro LEDs. As Samsung Display begins preparations for mass production of QD-OLEDs, in 2021, Samsung Visual apparently hasn’t committed to selling them.

Business Korea reports Samsung Visual is balking at incorporating the new technology into its TV plans, having invested heavily in QLED and Micro LED marketing.  Samsung Display wants to capitalize on the emergence of QD-OLED displays to make up for their recent exit from LCD production and their earlier attempt to use their LTPS and RGB FMM approach for making OLED TV panels that proved to expensive. SDC may have to look to competitors of Samsung Visual for their QD-OLED panels. LGD has already signed 19 OEMs to sell TVs with their OLED panels but LGE generates over 60% of the sales and Sony adds another 20%. Given that the QD-OLED panels will become available in Q121, the marketing plan for the new TV technology should be well underway. But Business Korea said Samsung Visual hasn’t yet decided to release the first QD-OLED based TVs to the market, and Samsung Display isn’t willing to wait any longer. Samsung Visual’s concerns include:

No decisions have been made, but time is running out. While economics and marketing are significant, it has become a political issue and it is hard to imagine that Samsung Visual wants a conflict with the Chairman’s office that has endorsed the QD-OLED program and is investing a reported $12b.

Omdia contrasts the structure of LG’s WRGB with Samsung’s QD-OLED, which points to a number of cost differences between the two processes:
The WRGB process should be less costly both inherently and because 1) The LG fab in Korea is 5 years old and 2) the China fab is subsidized by the Chinese. 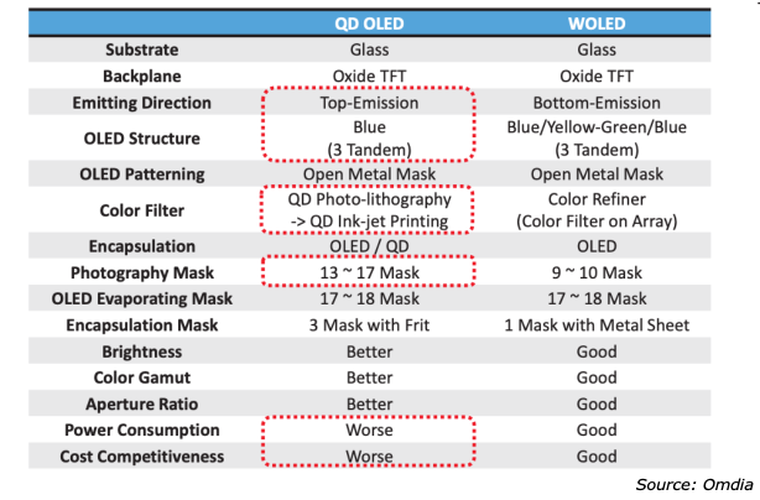 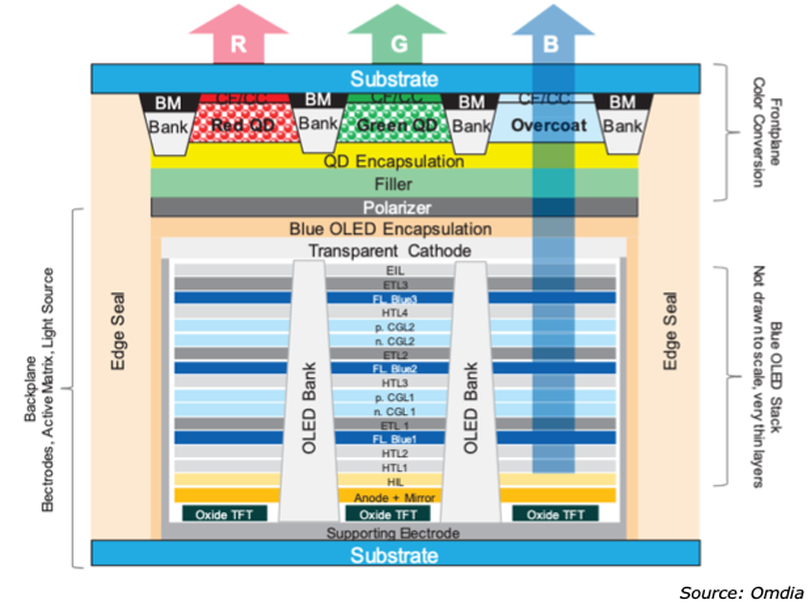 ​What they missed is that Samsung could eventually use a high efficient blue, which at best would require only 1 blue layer cutting the cost of the OLED portion by 2/3 and thereby reduce the cost difference. The future of QD TVs is likely dependent on:


Overriding all of these conditions is the likelihood that Samsung Visual will be able to develop a Micro LED TV that can be sold into the consumer TV market.