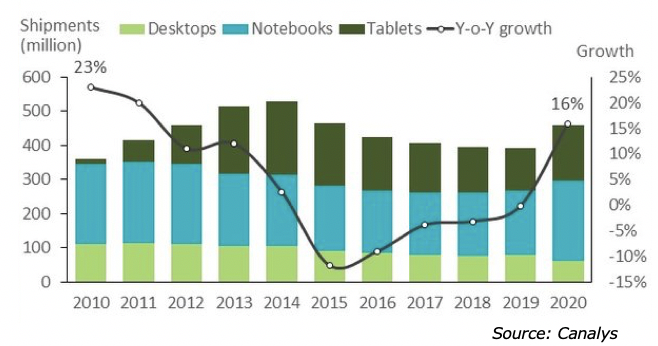 Shipments for the entire 2020 advanced over 25% on year to a 9-year high of 201 million units, DigitTimes Research figures show.
As brand vendors continue to pull in shipments from ODMs to thicken their inventories supporting stay-at-home economy in the months ahead, worldwide notebook shipments are expected to fall by less than 10% in first-quarter 2021, a significant improvement from previous sequential falls of 15-25% for the same quarter.

Leading brand vendors are expected to post only slight sequential falls in first-quarter 2021 shipments, due partly to lower comparison basis of fourth-quarter 2020 amid significant components shortages. Top vendor HP may ramp up its shipments of Chromebooks in the quarter. Lenovo may not be able to see the same shipment momentum as its peers in first-quarter 2021 as its channel distributors in the US and Europe registered higher inventory levels in the preceding quarter.
Dell, with commercial-use notebooks commanding over 60% of its shipments, may see shipments for first-quarter 2021 fall sequentially at a larger pace than HP, due to high comparison basis for fourth-quarter 2020, when both shipments to enterprise clients and those of Chromebooks increased significantly along with the resurging pandemic.

In terms of ODMs in Taiwan, Quanta Computer will continue to take the lead in first-quarter 2021 on stable shipments of Apple devices and last-batch orders for education-use Chromebooks from Japan. Compal Electronics is expected to sustain the same shipment ratio of 30% in the quarter as registered a quarter earlier.

Breaking down that number, Lenovo was the biggest winner. The company still fell short of HP’s 3.5 million units shipped, but the 2.8 million Lenovo Chromebooks shipped in Q4 2020 represented a massive 1,766% growth. Samsung, Asus, Acer, and Dell all saw steady, triple-digit growth as well during the pandemic but didn’t gain any traction compared to competitors. Canalys Research Director Rushabh Doshi said:
Demand for Chromebooks is through the roof. With many countries being forced to accelerate their digital education plans in the wake of additional lockdowns, schools and universities are clamoring for easy to deploy solutions and Google’s digital offerings for education are proving quite popular over rival platforms, especially in the US and Western Europe. With governments in many countries racing toward a much needed 1:1 device to student ratio, Chromebook demand for education is expected to remain strong through 2021. Outside education, there has also been mounting interest from consumers and traditional commercial customers in seeking out Chromebooks to ensure affordable continuity of business or personal computing.

​This came alongside growth for tablets as well, bringing that market to its highest peak since 2015 with just shy of 53 million tablets shipped in Q4 2020 alone. Apple, of course dominated that market with its excellent iPad lineup, but Samsung had a strong second place with nearly the same 40% growth YoY. The overall PC market also saw a 35% jump year-over-year as a result of the pandemic, but clearly a lot of that focus was on Chromebooks, likely due to the affordable price points.
​
Table 1: Q420 Global Tablet Shipments, Share Growth by OEM